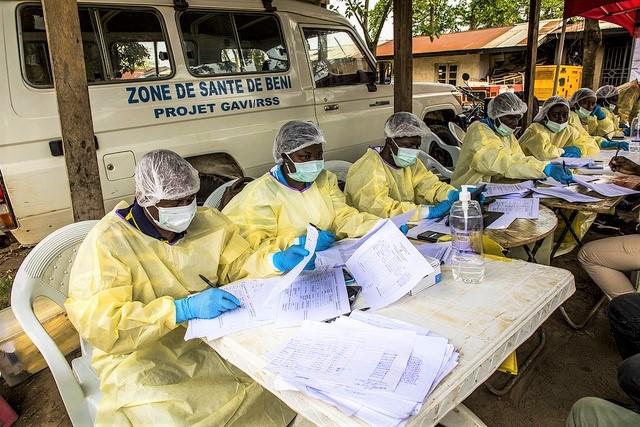 An uptick in the rate of newly confirmed Ebola cases in the Democratic Republic of Congo's outbreak continued today, with the country's health ministry reporting eight illnesses in four locations.

In other outbreak developments, the World Health Organization (WHO) African regional office in a weekly report today noted two more infections in health workers, and though Katwa is still the hot spot, seven health zones that have reported recent cases are points of concern.

Of the eight new cases the DRC health ministry reported today, four are in Masereka—the site of a recent family cluster—and two are in Katwa. Also, Kayina and Mandima each have one new case.

Three more people died from Ebola, including two in community settings—one in Katwa and one in Mandima. The other fatality occurred at Butembo's Ebola treatment center. The developments increase the overall number of deaths to 606.

In its weekly diseases and health emergencies update, the WHO's African regional office said though Katwa health zone is still the main epicenter, responsible for 44% of cases over the past 3 weeks, seven health zones have reported new confirmed cases over the past 3 days and remain a concern. Besides Katwa they include Masereka, Vuhovi, Butembo, Kyondo, Mandima, and Kayina.

According to the report, two more infections have been reported in healthcare workers, bringing the total to 77, of which 26 were fatal.

In other recent developments, outbreak responders have established a unit to coordinate monitoring and analysis of lost contacts in Bunia in Ituri province.

Also, the report had more details about recent violence in Biena in North Kivu province, where health workers trying to obtain blood samples from a deceased man with suspected Ebola were attacked, prompting a police response. The WHO report says a transit center in Mambowa, where suspected patients await test results, was attacked.

In summarizing the latest trends, the WHO said the outbreak continues with moderate intensity and though the absolute numbers appear to be declining, reappearance of the virus in areas where transmission seemed to have stopped is a serious concern. It added that frequent disruptions from community resistance and loss of contacts to follow-up are driving transmission, but the result of proven and innovative health measures in many areas is promising.

"Response efforts need to continue, and funding gaps need to be filled by the global donor community," the WHO said.