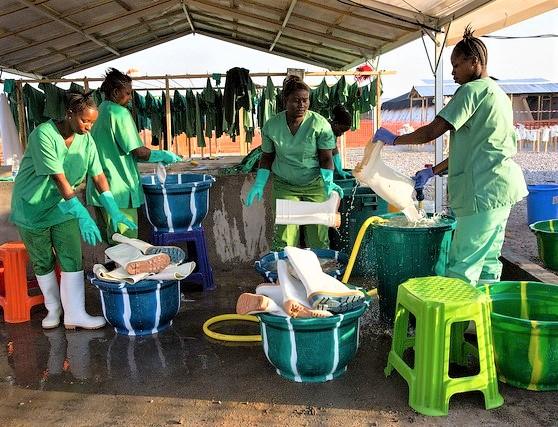 More cases recorded today and over the weekend underscore that Katwa, a city in the eastern reaches of the Democratic Republic of the Congo (DRC), remains the current epicenter of the 7-month-long Ebola outbreak in North Kivu and Ituri provinces.

On Saturday and Sunday, the DRC's health ministry said there were two new Ebola cases in Katwa, and one new case in Vuhovi. Today, the ministry reported two new cases, one each in Katwa and Butembo.

The new cases raise the outbreak total to 840 cases, of which 775 are confirmed and 65 are probable. There have been 537 deaths during the outbreak, and 185 suspected cases are still under investigation.

Seven deaths were recorded over the last 3 days, including three community deaths in Katwa, Butembo, and Vuhovi. Community deaths, which occur outside of a hospital or Ebola treatment center, raise the risk of Ebola transmission.

Since August, a total of 80,989 people in the DRC and neighboring countries have been vaccinated with Merck's candidate VSV-EBOV vaccine, including 20,593 in Katwa.

On Friday, Martin Fayulu, the leader of the Lamuka party, visited Butembo and called for the observance of hygiene measures at a rally.

Fayulu contests the results of the late-December presidential election which saw him narrowly losing to Felix Tshisekedi, and considers himself president-elect of the DRC. Fayulu also visited a treatment center in Katwa and praised local health workers for their job.

The visit took place against the backdrop against growing violence in the region, which prompted Doctors Without Borders (MSF) to withdraw nonessential aid workers from Masisi, in North Kivu province.

According to Agence France-Presse (AFP), MSF suspended work in the region after gunmen abducted two staff members on Feb 8. Though the region is not currently the site of any Ebola activity, the area is only 100 kilometers from Goma, the capital of North Kivu.