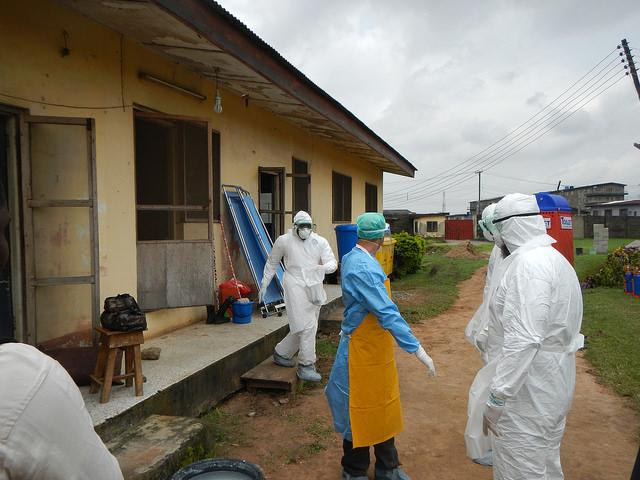 Two medical workers assisting with the Ebola outbreak response in Sierra Leone have been sickened by the disease, one of them deployed by the World Health Organization (WHO) and the other a British nurse who was airlifted to a London hospital for treatment.

News of two more infected aid workers comes as the WHO today expressed heightened concerns about the impact the outbreak is having on health workers battling the disease and obstacles the infections pose to getting enough workers from overseas to staff treatment centers.

According to media reports, the WHO-deployed health worker is an epidemiologist from Senegal. The WHO said on its Twitter feed that the worker is with the Global Outbreak Alert and Response Network (GOARN). In a statement yesterday the WHO said it was working to ensure that the patient, who got sick in Sierra Leone, has the best care possible, with the option of medical evacuation if needed.

The health worker was in Kailahun district tracing Ebola virus disease (EVD) cases, according to Politico SL, a newspaper based in Sierra Leone. The district has been one of Sierra Leone's EVD hot spots.

The WHO said it has so far deployed about 400 staff members of its own and from partner organizations, and the patient is the first of that number to be infected in the outbreak. It added that it recognized the risk Ebola virus poses to health workers and takes many precautions before they deploy to help them protect themselves in the field.

Meanwhile, Public Health England (PHE) yesterday said a British national living in Sierra Leone has been diagnosed with EVD and is being medically evacuated to the United Kingdom, to be treated in an isolation unit at the Royal Free NHS Foundation hospital in London. It said the patient was not currently in serious condition.

John Watson, MBBS, MSc, PHE's deputy chief medical officer, said in the statement that the UK has a robust, well-tested system for handling unusual infectious diseases and that the country's hospitals have a proven record of managing imported infectious diseases. "This patient will be isolated and will receive the best care possible."

The PHE said it would provide no other details about the patient, to protect the patient's privacy. However, according to a media report, the patient is a man who has been working as a volunteer nurse at Kenema Government Hospital over the last 3 months.

The British patient is the fifth medical worker to be flown out of West Africa because of EVD. The others are two Americans who worked for a Christian missionary group, both of whom have recovered, a Spanish priest who died from his infection, and a Spanish nun who reportedly did not have EVD.

The WHO today singled out the high burden the disease has had on health workers as one of the outbreak's unprecedented features. More than 240 healthcare workers have been sickened by Ebola virus disease (EVD) in the four West African countries affected by the event, the agency said. More than half of them have died. Among them have been some of the top doctors in Liberia and Sierra Leone.

Several factors explain the high toll the disease is taking on medical staff, the WHO said. They include shortages and improper use of personal protective equipment (PPE), too few medical staff to respond to the outbreak, and compassion that prompts health workers to work in isolation wards beyond the number of hours recommended for safety reasons.

Aside from shortages, the PPE is hot and cumbersome, especially in tropical climates, pushing clinicians beyond their physical limits, with some working 12-hour shifts. "Staff who are exhausted are more prone to make mistakes," the WHO said.

Medical staff and the people in West Africa aren't familiar with EVD, given that the current outbreak is the region's first, the WHO said. Also, other diseases in the area such as malaria have symptoms that often resemble the initial symptoms of EVD, and patients often seek emergency care in settings where doctors and nurses don't initially suspect Ebola and aren't taking protective measures against the disease.

The heavy toll on medical staff is complicating response efforts, because it not only depletes personnel who can treat sick patients, but also makes it difficult for the WHO to secure foreign workers to come to West Africa to help with the outbreak. The WHO added that the African Union has launched an urgent push to recruit more health workers from its member countries.

In view of the risk to health workers and other outbreak responders, the US Centers for Disease Control and Prevention (CDC) on Aug 23 issued advice for humanitarian workers traveling to the outbreak countries to assist with the EVD response. It urged people planning trips to the region to consult a travel medicine doctor beforehand to discuss individual recommendations based on medical history and travel plans.

The CDC said humanitarian workers should pack a basic first aid kit. If they expect to work in a healthcare setting where close contact with EVD patients could occur, travelers should ensure that the organization will provide PPE, and if not, workers should pack them and bring them along. It urged workers to check their health insurance plans, or those of their organization, and to purchase one if not fully covered. Workers should also ask organizations about medical evacuation plans.

The CDC's advice also covers special recommendations for health workers, what to do if a worker gets sick during the trip, and what steps to take when returning to the United States.

In other medical developments, an official from Liberia's health ministry said today that a doctor who received the experimental EVD drug ZMapp has died, Agence France-Presse (AFP) reported. The country's information minister, Lewis Brown, told AFP that the doctor had been improving, but died last night. Two other health workers who received the drug are still being treated and show encouraging signs.

A WHO ethics panel has given the green light to the use of experimental drugs and vaccines in the outbreak, but it has also warned that supplies are extremely limited and that the therapies aren't expected to have an impact on the course of the outbreak. However, the group will host a meeting in Geneva on Sept 4 and 5 to discuss the most promising treatments, safety and efficacy issues, and possible ways to speed up clinical trials.

Meanwhile, Japan's government today said it can provide a Japanese-developed antiviral drug, if the WHO requests it, the Associated Press (AP) reported yesterday. The drug favipiravir is approved in Japan for treating new and reemerging influenza viruses.

Chief Cabinet Secretary Yoshihide Suga said Japan is watching for more details from the WHO on the use of untested drugs and in the case of an emergency can respond to individual requests before any decisions from WHO.

The drug's developer, Toyama Chemical Co., a subsidiary of Fujifilm, is talking with the US Food and Drug Administration (FDA) about clinical tests of the drug for treating EVD, a company spokesman told the AP. The company has enough of the drug to treat 20,000 patients.