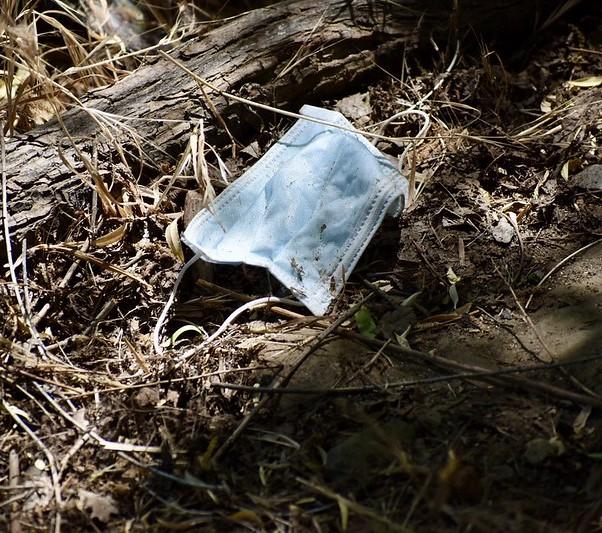 The proliferation of face coverings to protect against COVID-19 has had a devastating, lasting effect on the environment, with a 9,000% increase in mask litter over 14 months in 11 countries, finds an observational study led by UK researchers yesterday in Nature Sustainability.

Discarded gloves and used disinfectant wipes have also added to the refuse, the increase of which was likely driven by national COVID-19 policy responses—particularly face mask mandates—and World Health Organization (WHO) recommendations, the researchers said.

Litter poses a big threat to the environment, potentially clogging drains and sewage systems; polluting rivers, lakes, streams, and oceans; entangling and poisoning wildlife; and leaching contaminants such as microplastics into the lower food chain.

The researchers, from the University of Portsmouth and the University of Southampton in England and Griffith University in Australia, quantified the emergence of single-use personal protective equipment (PPE) and pandemic-related litter—much of it made with plastic—using the Litterati citizen-reported litter-collection app from September 2019 through October 2020. More than 2 million pieces of trash were collected during the study.

In the 4 months leading up to the WHO announcement of a global health emergency, the volume of masks, gloves, and wipes collected remained stable, with the proportion of masks at less than 0.01% of all trash and gloves and wipes at about 0.2%.

After the WHO announcement, quantities of all types of PPE litter increased, with gloves spiking 2.4% but then falling to about 0.4% above prepandemic levels. Volumes of wipes gradually rose from March to August, at 0.6% over previous levels, declining to about 0.4%.

Mask litter increased 9,000% from March to October, peaking at 0.84% of all litter. "Importantly, these proportions were observed alongside an increase in the total number of litter items recorded in Litterati, indicating that this was not an artefact of sampling," the authors noted.

In March 2020, the WHO estimated an increase in monthly demand for healthcare settings alone of 89 million masks and 76 million gloves, the authors said. By October 2020, discarded masks had increased 84-fold over the previous year.

Over the first 6 months of the pandemic, the WHO advised that the general public should not wear masks in order to conserve limited supplies for healthcare workers but then revised its guidance on Jun 5, 2020, to recommend their use in settings in which physical distancing was impossible and in countries with ongoing community transmission.

Impact of WHO guidance, national mandates

While face masks were nearly nonexistent as litter in all countries before the pandemic, they made up increasing proportions of trash at different levels in different countries. The United Kingdom, for example, had the highest proportion of mask, glove, and wipe waste, with masks accounting for more than 5% of all litter and gloves and wipes making up about 1.5%.

On the other end of the spectrum, the proportion of masks, gloves and wipes did not exceed 1% of all litter in the Netherlands, except for gloves, which reached 3% in April 2020. Sweden went months without any recorded PPE detritus. Canada began to report mask, glove, and wipe litter around the time of the WHO pandemic announcement, while Germany and the United States followed a similar pattern for masks, although glove and wipe litter existed before the pandemic.

The introduction of mask-wearing policies clearly influenced PPE litter, the researchers said, with masks showing the greatest response (about 0.01%, on average) before legislation and rising thereafter. Glove litter started to climb 2 months before legislation, aligning with the WHO's announcement and recommendations but falling after the implementation of national mask-wearing policies.

"As nations began to reduce lockdown restrictions, incidences of glove littering reduced, probably due to improved education on how the virus is likely to be transmitted, with wipes increasing during lower level restrictions as people begin to clean surfaces," the authors wrote.

The researchers forecasted that mask use will remain high into 2022, thus presenting a continuing environmental threat. Wipes and gloves, they said, will also continue to be used, mostly in regions with ongoing community COVID-19 transmission.

Previous studies have shown that people tend to litter more in already-littered settings, the authors noted. Staff shortages could have led to less street cleaning and waste collection, or people may have been worried that taking waste home for disposal would contaminate their shopping bags, vehicles, or homes.

"Our results suggest that, alongside addressing the threat to human health, targeted national-level pandemic responses are also necessary to address the threat to environmental health posed by related litter," the authors wrote. "As it is likely that higher mask use will continue following the immediate health pandemic, such responses must be sustained."

In a University of Portsmouth news release, lead author Keiron Roberts, PhD, said the results illustrate the impact that mandating the use of PPE can have on littering. "There is a clear need to ensure that requiring the use of these items is accompanied with education campaigns to limit their release into the environment," he said.

The researchers called for investments in infrastructure, services, and legislation to reduce PPE littering. "As such, future policies should be designed to promote the use of reusable items; facilitate the collection and disposal of single-use items at points where their use is mandatory; and support waste management infrastructure in the recovery and subsequent disposal of the material," they concluded in the study.