Flu hangs on in some states but declines overall 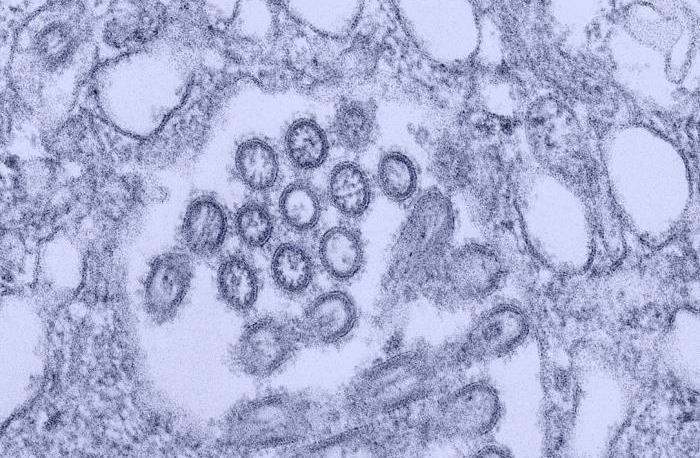 Magnified tissue culture sample with 2009 H1N1 virus, the strain that continues to predominate in the US, Canada, and Europe., C. Goldsmith & D. Rollin / CDC

Although national flu indicators are dropping, the disease is still hitting hard and increasing in some states, the US Centers for Disease Control and Prevention (CDC) said today in its latest update.

The CDC predicted that flu activity is likely to continue for several more weeks. Markers that dipped last week included doctor's visits for flulike illness, the percentage of respiratory specimens that tested positive for flu, and the number of states reporting high activity.

The nation's overall percentage of doctor's visits for flulike illness declined for the sixth straight week to 3.0%, compared with 3.2% the previous week. Also, the percentage of tests that were positive for flu fell to 16.8%, down from 19.6% the week before. Regionally, that marker varied from a low of 14.2% to a high of 29.6%.

The 2009 H1N1 virus is still driving most of the flu activity. The CDC said that, of influenza A viruses that were subtyped last week, 94% were H1N1 and 6% were H3N2. More than 60% of hospitalizations have been in people ages 18 to 64, which goes hand-in-hand with a pattern seen during the pandemic months.

Only six states reported high flu activity, down from seven. They are Arkansas, Connecticut, Kansas, New York, Oklahoma, and Texas. Geographically, 24 states are still reporting widespread distribution, a drop from 29 the previous week.

States reported 10 more pediatric flu deaths to the CDC, putting the total for the current flu season at 50. Six of the newly reported fatalities were linked to the 2009 H1N1 virus, while four involved unsubtyped influenza A.

Meanwhile, the overall percentage of deaths from pneumonia and flu decreased again, falling to 8.6%, but the level is still above the epidemic threshold, the agency said.

Flu in Canada and Europe

Canadian health officials today also reported that flu activity declined last week, but they noted that eastern provinces that saw a later start to the flu season are still experiencing ongoing activity, according to the latest report from the Public Health Agency of Canada (PHAC).

Though the 2009 H1N1 virus continues as the dominant strain in Canada, health providers are reporting an increasing number of influenza B detections, the PHAC said. The agency said adults ages 20 to 64 continue to be more affected by flu this season.

Elsewhere, European flu markers declined for the second week in row, the European Centre for Disease Prevention and Control (ECDC) reported today. Greece was the only country that reported high-intensity flu activity.