MERS-CoV found in bat; hunt for other sources goes on 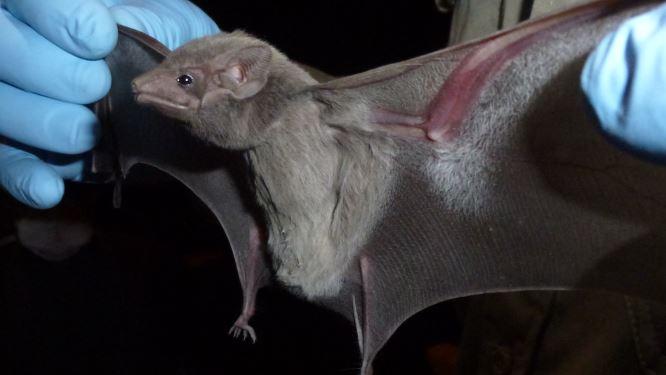 Scientists reported today that they found strong evidence of the MERS-CoV (Middle East respiratory syndrome coronavirus) in a bat from Saudi Arabia, suggesting that, as suspected, bats are the virus's natural reservoir.

But the hunt for an intermediate vehicle—animal, food, or something else—that channels the virus from bats to humans will continue, said Ziad Memish, MD, Saudi Arabia's deputy minister for public health, during a webinar from Washington, DC, today.

"I think we suspected from day 1 that bats had something to do with this," said Memish, the first author of the report on the bat finding. "It was important to document the bats. . . . We'll continue to try to find the relationship between bats and humans. There must be something in the middle."

Writing in Emerging infectious Diseases, Memish and colleagues said a fragment of a coronavirus found in a fecal sample from an Egyptian tomb bat (Taphozous perforatus) was a 100% match for MERS-CoV. The sample was collected just a few kilometers from the home of one of the first MERS victims.

The research team included scientists from Columbia University and the EcoHealth Alliance, both in New York City, as well as Saudi Arabia, with W. Ian Lipkin, MD, of Columbia as senior author.

Today's report comes less than 2 weeks after the report that a number of camels in Oman and the Canary Islands tested positive for antibodies to MERS-CoV, suggesting past exposure to the virus.

"There have been several reports of finding MERS-like viruses in animals. None were a genetic match," Lipkin commented in a Columbia press release today. "In this case we have a virus in an animal that is identical in sequence to the virus found in the first human case. Importantly, it’s coming from the vicinity of that first case."

The bat discovery prompted calls today for increased testing of other animals to figure out how the virus is moving from bats to humans and find a way to block its path. At the webinar, Memish said Saudi Arabia is waiting for clear guidance from the World Organization for Animal health (OIE) on which animals to test and how to go about it.

Bats have long been suspected as the source of MERS-CoV because of genetic likenesses between betacoronaviruses found in bats and the MERS virus in humans. The new finding was the fruit of two sampling expeditions conducted by the research team last October and in April of this year.

During the October trip, the team interviewed the family of an index MERS patient in Bisha, Saudi Arabia, and collected samples from bats in an abandoned date palm orchard less than 12 kilometers from his home and also from a site near the hardware store where he worked, according to the report. The researchers captured 96 bats of seven species and took various samples from them.

In the April investigation, the scientists collected fecal samples at bat roosting sites around Bisha, Unaizah, and Riyadh and captured representative bats at each location for sampling. All the samples were frozen and sent to Columbia in New York.

Memish noted today that analysis of the samples was delayed because they had to be tested for foot-and-mouth disease before they could be admitted into the United States. Earlier reports said the samples were tested by the US Department of Agriculture at its Plum Island lab off Long Island, New York.

Using polymerase chain reaction (PCR) testing, the researchers found coronavirus sequences from 220 of 732 bat-roost fecal samples and 7 of 91 rectal swab samples or fecal pellets. PCR amplification of nucleic acid from a fecal pellet from a T perforatus bat in Bisha was 100% identical to the MERS-CoV isolate cloned from the patient from the same town.

The scientists said they couldn't recover any other viral sequences besides the 190-nucleotide fragment they tested, but they are confident that what they found was MERS-CoV. One reason is that there is no precedent for a 100% match between a bat sequence and a human MERS-CoV sequence. Another is that the Columbia lab had no MERS-CoV samples when the team started its research, which excludes contamination of the bat samples by viral material already in the lab.

Given the wide distribution of MERS cases in the Middle East, the virus probably exists in other hosts besides T perforatus, the authors note. The press release said that in coming days the team will be releasing the results of their search for the virus in camels, sheep, goats, and cattle.

“There is no evidence of direct exposure to bats in the majority of human cases of MERS,” Memish commented in the release. “Given that human-to-human transmission is inefficient, we speculate that an as-yet-to-be determined intermediate host plays a critical role in human disease.”

Others welcome the findings

Two other experts welcomed the findings today and called for more testing of animals.

"I think we'll need additional corroborative information, but it makes great biological sense," said Michael T. Osterholm, PhD, MPH, director of the University of Minnesota's Center for Infectious Disease Research and Policy, which publishes CIDRAP News. "I think the picture is becoming clearer that it's very possible that there's a bat reservoir for this virus, as we might've expected, and there are other species that may be intermediaries, such as camels."

He predicted that more studies supporting a role for bats as the reservoir will be published soon.

Osterholm said many more animals should be tested: "We need to find the pipelines of the virus from its natural reservoir to humans. We need to understand the biology and also where we can put control measures in place. . . . How do you interrupt animal to human transmission? We need to know what animals are involved to do that."

Matthew B. Frieman, PhD, who studies the SARS coronavirus at the University of Maryland School of Medicine, told CIDRAP News that researchers now should "go throughout [Saudi Arabia] and sample anything that moves (nasal, throat, fecal, blood, sera samples) to find positive animals." He is an assistant professor of microbiology and immunology.

He also called for both PCR and serologic (antibody) testing of as many people as possible in areas that have had MERS cases, with a special focus on animal handlers. In addition, anyone admitted to a hospital with respiratory symptoms in affected areas should be carefully tested—not only in Saudi Arabia but also in Oman, Jordan, the United Arab Emirates, and Tunisia, he said.

"Then and only then can we get an idea of where this virus came from, how many people have been infected, how it's being transmitted and how variable the sequences are between these samples to understand the viral epidemiology of the outbreak," Frieman added.

In need of OIE guidance

At today's webinar, presented by the University of Pittsburgh Medical Center's Center for Health Security, Memish stressed the need for further efforts to find the intermediate host for MERS-CoV, but he said Saudi Arabia needs guidance from the OIE on that score.

The two-hour program featured a presentation by Memish on his country's experience with MERS-CoV, followed by questions from Thomas Inglesby, MD, director of the UPMC's Center for Health Security, and from the audience.

In response to questions, Memish said, "The question has been put to the animal health organization on what animals to test, what samples to collect, how many, and where to test them. Until that information is available, we're not going around testing everything that moves."

"Unless there is clear guidance on what should be done, it would be difficult to take samples," he added. "We wait for experts in the field to tell us what to do. That has to be based on evidence."

Memish also was questioned about Saudi Arabia's reports of new MERS cases, which have mostly been very brief and contained few details. He asserted that the Ministry of Health (MOH) has been following the International Health Regulations (IHR) in its public communications.

"We follow the IHR protocol," he said. "This information should not compromise the privacy of the individual. I think you report it as a case, [with the] age, sex, symptoms, outcome, if on ventilator and ICU, and what's happening with the contact investigation. Anything more than that I think will touch on the privacy of the patient and family."

In response to other questions, Memish suggested that MERS has drawn a little more attention than it warrants.

"To be fair, it's a new virus, it has a high mortality, there's no known therapeutic modality, no vaccine," he said. "It is an important disease and it needs to receive the appropriate attention. . . . Has it been blown out of proportion? I think maybe a bit by the media. And I think the more information becomes available, I think the media has been good at giving that information to the public."

In a few of his other comments, Memish said: