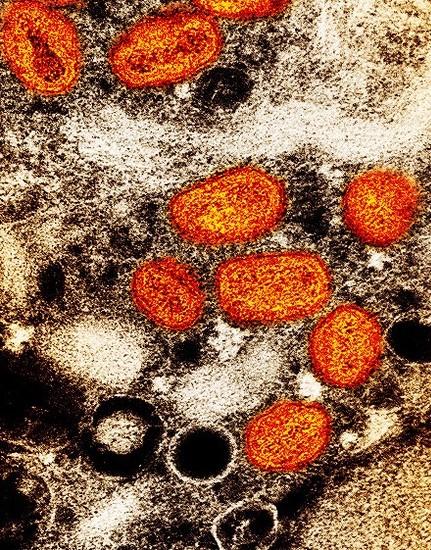 A study published today in Eurosurveillance used 140 samples taken from 12 infected monkeypox patients in Barcelona, Spain, and found DNA of the poxvirus in semen, saliva, urine, and feces.

Though the primary mode of transmission for the smallpox-related virus is through skin-to-skin contact with infected lesions, this study suggests a possibility of transmission through sexual fluids or saliva. The authors emphasize, however, that viral DNA does not necessarily mean infectious virus.

In the study, indications of high viral loads were detected in all 12 saliva samples and in skin lesions of all 12 patients. Detectable DNA was collected from 11 of 12 rectal swabs, 10 of 12 from nasopharyngeal swabs, 7 of 9 from semen, 9 of 12 from urine, and 8 of 12 from feces. All samples were collected at the time of diagnosis.

All patients were men who have sex with men (MSM), with a median age of 38.5. Four were HIV-positive but with an undetectable HIV viral load. All patients reported sexual activity with as many as 10 partners in the previous month.

"Our results contribute to an improved understanding of a likely complex transmission puzzle and underline other immediate areas for research such as the infectivity of bodily fluids, the frequency of secondary and asymptomatic cases or the impact of social and behavioural factors affecting viral transmission," the authors concluded.

In related news, the European Centre for Disease Prevention and Control and the World Health Organization (WHO) European office late yesterday posted an epidemiologic update, reporting 8,238 cases from 35 countries in the region. Nearly all cases are occurring in men (99.5%) aged 31 to 40 years.

No deaths from monkeypox have been reported from the European region, but three people have required intensive care unit admission.

The United States now has 1,053 cases from 43 jurisdictions, an increase of 124 cases since yesterday, according to the Centers for Disease Control and Prevention.

Today, a fourth commercial laboratory announced it would begin running polymerase chain reaction (PCR) tests for monkeypox. Aegis said it will be able to perform more than 5,000 tests per week moving to 10,000 tests per week by the beginning of August.

Also today, the WHO announced it will reconvene its monkeypox emergency committee on Jul 21 to see if the outbreak warrants a public health emergency of international concern. In June, the organization voted against such a declaration.

Globally, 11,208 cases have been confirmed, mainly in non-endemic countries.