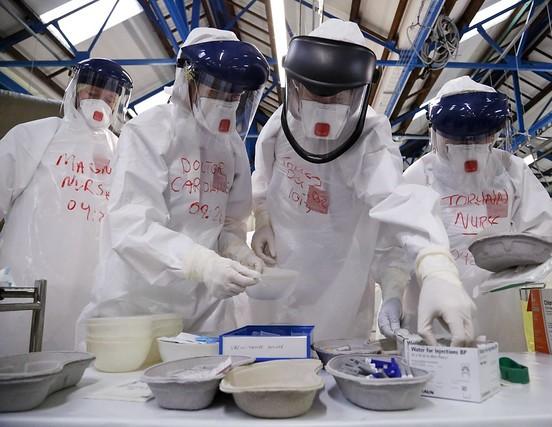 In its first annual report, an independent board established by the World Health Organization (WHO) and the World Bank to keep its finger on the pulse of the world's outbreak and emergency readiness said the world isn't prepared to respond to a pandemic and that proactive efforts are needed to detect and control potential outbreaks.

Housed at WHO headquarters in Geneva and comprising 15 members, the Global Preparedness Monitoring Board (GPMB) was launched in May 2018 to assess emergency preparedness across national governments, United Nations agencies, civil society, and the private sector. As part of its mission, each year it will issue a report on financing, research and development, and health crisis preparedness at global, regional, and national levels.

For its first report, the group looked at preparedness for epidemics and pandemics by reviewing recommendations from previous high-level panels following the 2009 H1N1 flu pandemic and the 2014-2016 West Africa Ebola outbreak and commissioning seven review papers, including one on managing pandemics caused by high-impact respiratory pathogens.

In a forward by cochairs Gro Harlem Brundtland, MD, MPH, Norway's former prime minister and former WHO director-general, and Elhadj As Sy, secretary-general of the International Federation of Red Cross and Red Crescent Societies, said in the forward to the 48-page report that the result of the group's analysis provides a snapshot of the world's ability to prevent and contain a global health threat.

The expert panel found that many recommendations of earlier groups were poorly implemented or not implemented at all and that serious gaps persist. "For too long, we have allowed a cycle of panic and neglect when it comes to pandemics: we ramp up efforts when there is a serious threat, then quickly forget about them when the threat subsides," they wrote. "It is well past time to act."

In the report, the group spells out seven urgent actions for world leaders to take to boost global preparedness, all of which include progress indicators designed to be completed by September 2020.

Among three recommendations aimed at countries, the group said government heads must commit to preparedness by implementing their binding obligations under the International Health Regulations. Also, they said countries and regional organizations such as the G7 and G20 must follow through on their funding commitments for preparedness and agree to monitor progress. All countries much build strong health systems and routinely conduct simulation exercises to establish and maintain preparedness, with an eye toward prioritizing community involvement.

One of the recommendations urges countries, donors, and multilateral groups to prepare for a rapidly spreading pandemic from a lethal respiratory pathogen—naturally occurring or from an accidental or intentional release—by investing in new vaccines, drugs, surge manufacturing capacity, broad-spectrum antivirals, and appropriate nonpharmacologic interventions. That point also addressed sharing genome sequences of new pathogens and sharing limited medical countermeasures.

For financing groups, the experts urged institutions to link preparedness with financial risk planning and to create incentives and increase funding for preparedness. And for United Nations (UN) agencies, the authors urge stronger coordination and well-defined UN roles and responsibilities, along with ways to rapidly reset preparedness and response strategies during health emergencies.

Regarding the WHO, the GPMB recommends introducing an approach to mobilize wider national, regional, and international communities at earlier outbreak stages before a Public Health Emergency of International Concern is declared.

Ali Khan, MD, MPH, dean of the College of Public Health at the University of Nebraska Medical Center, wrote on Twitter today that the report's main message that the pandemic risk is growing and that the world is not prepared—highlighted in media stories on the GPMB report—is not a new revelation.

He said novel solutions are needed and noted that the group doesn't call for a deputy UN secretary for health or a new preparedness fund. And Khan said the report doesn't spell out any clear new actions for the WHO, beyond reorganization, which has been done before to improve response in outbreak settings.

Michael T. Osterholm, PhD, MPH, director of the Center for Infectious Disease Research and Policy (CIDRAP), which publishes CIDRAP News, praised the report and its attention to a critical issue, and he said it reflects the work of some of the best minds in public health. However, he said the report doesn't spell out key targets for government investments, other than public health infrastructure.

More specifics are needed, he said, on how governments should address other problems that could occur as a pandemic unfolds, such as disruptions in the manufacturing and distribution of 151 lifesaving drugs, which could lead to shortages that kill more people than the pandemic virus itself. He added that countries should be urged to invest heavily in critical pharmaceutical products.

More focus should be placed on the sources of drug ingredients and manufacturing. "China is ground zero for preparedness," Osterholm said.

Also, he said the world still lacks game-changing flu vaccines. Currently, pandemic plans project that a vaccine will be available 6 months after a pandemic begins. During the 2009 H1N1 flu pandemic, however, there was still too little vaccine, even for the second illness wave.

"We need much larger planning and thinking," Osterholm said.