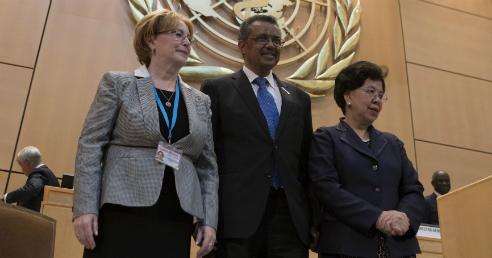 Delegates at the World Health Assembly (WHA) in Geneva today elected Tedros Adhanom Ghebeyesus, PhD, as World Health Organization (WHO) director-general, who becomes the first African to lead the group.

After speeches today by the three candidates, who also included the United Kingdom's David Nabarro, MD, and Pakistan's Sania Nishtar, MD, Tedros, who goes by his first name, received the most votes in the first round of secret voting. Tedros won the most votes after two more rounds against Nabarro.

Tedros will take over as WHO director-general on Jul 1, succeeding China's Margaret Chan, MD, MPH, who held two 5-year terms. When Chan was confirmed in 2006, she became the first Chinese citizen to lead a major United Nations agency.

Before his election to the WHO director-general position, Tedros was Ethiopia's foreign affairs minister, and from 2005 to 2012 he was the country's health minister, according to a press release today from the WHO. He has also chaired the board of the Global Fund to Fight AIDS, Tuberculosis, and Malaria, has chaired the Roll Back Malaria Partnership Board, and served as board cochair for the Partnership for Maternal, Newborn and Child Health.

The WHO said that while Tedros was Ethiopia's health minister, he led comprehensive health system reforms that expanded the country's health system, including the creation of 3,500 health centers and 16,000 health posts and boosting the health workforce by 38,000. Under his watch, Ethiopia also established a financing mechanism to expand health insurance coverage.

Laurie Garrett, senior fellow for global health at the Council on Foreign Relations in New York City, told CIDRAP News that a month ago, Nabarro seemed to be the frontrunner, but one thing that hurt him in the final days of the director-general race was an effort of one of his advisors, who alleged in a media report that Tedros covered up a cholera outbreak while Ethiopia's health minister. She was on the WHA sidelines in Geneva today, live Tweeting the voting developments. "Many members of the World Health Assembly told me it smacked of dirty politics, and angered them against Nabarro."

She said Tedros' staff and consultants, echoing his "Let's get to work" remark at the conclusion of his address to the WHA after the vote, are already starting their transition work.

US Department of Health and Human Services (HHS) Secretary Tom Price, MD, issued a statement congratulating Tedros as the WHO's next director-general. "The United States looks forward to working with the new Director-General and our public health partners at the WHO to reform and strengthen the organization and enhance the ability of all nations to protect the health of their people," he said.

Also in a statement today, PATH president and chief executive officer Steve Davis added the group's congratulations and said Tedros takes the helm at WHO as it faces a number of significant and complex challenges to global health and security, including ensuring that the WHO and member states act on learning from recent Ebola outbreaks. "At the same time, WHO has a tremendous opportunity to accelerate recent advances in global health," he said, urging Tedros to prioritize policies and investments that improve the battle against HIV/AIDS, malaria, tuberculosis, polio, and preventable maternal and child deaths.

May 23 WHO press release