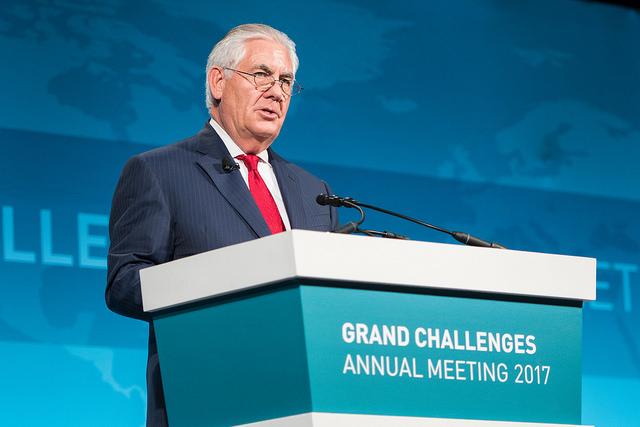 US Dept of State

In a keynote speech in Washington, D.C., yesterday at the Grand Challenges network annual meeting, US Secretary of State Rex Tillerson voiced support for US collaboration on global infectious disease issues, including ongoing efforts to battle threats such as HIV and malaria.

He also signaled US support for extending to 2024 the Global Health Security Agenda (GHSA), a partnership of 50 nations, international organizations, and nongovernmental organizations geared toward building countries' capacity to prevent and respond to infectious disease threats.

In the early months of the Trump administration, public health officials have been closely watching for signs about what role the country might continue to play in the fight against communicable diseases.

Much of Tillerson's speech pertained to the President's Emergency Plan for AIDS Relief (PEPFAR), which began during the George W. Bush administration and is credited with providing antiretroviral treatment to millions of lives in Africa. He said PEPFAR is a good example of focused investments with public-private partnerships to tackle a daunting public health problem.

The Trump administration recently unveiled a new PEPFAR strategy that invests in 50 countries but focuses on 13 high-burden ones with a goal of controlling the epidemic by 2020.

"But HIV/AIDS is not the only pandemic we are committed to stopping," Tillerson said, adding that US Agency for International Development (USAID) Administrator Mark Green recently announced new President's Malaria Initiative programs in four more countries in West Africa, extending prevention and treatment to 90 million people.

Tillerson also praised the GHSA as one of the most useful frameworks for halting the spread of infectious diseases. He said $1 billion in investments to strengthen global health security in at-risk countries has yielded outstanding results—for example, the quick response to a recent Ebola outbreak in the Democratic Republic of the Congo.

Encouraging countries to formally review their health security capacity and having other countries commit resources to building up health security are other signs of GHSA progress, he said. "While we’ve made tremendous progress since GHSA was launched in 2014, considerable work remains. That is why the United States advocates extending the Global Health Security Agenda until the year 2024."

Though the global health security landscape has changed over the years, "the United States commitment to working in multi-sectoral partnerships to counter infectious diseases through the Global Health Security Agenda will remain constant," Tillerson said.