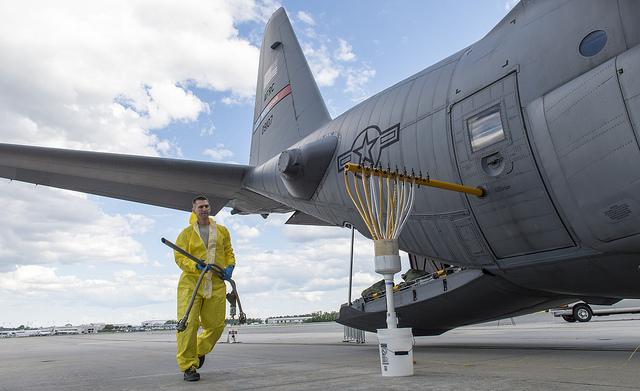 This Air Force C-130 was used in May for aerial spraying with naled to control mosquitoes near Charleston Air Force Base in South Carolina. Aerial spraying in Miami-Dade County, in contrast, has involved civilian and commercial aircraft., USAF, Brian Ferguson / Flickr cc

Aerial spraying with naled and Bti that targeted Aedes aegypti mosquitoes played a key role in interrupting Zika virus transmission in Miami's Wynwood neighborhood, according to a detailed report today on the state's response to and investigation into the first outbreak in the continental United States.

Florida officials and their partners from the Centers for Disease Control and Prevention (CDC) published their findings in an early online edition of Morbidity and Mortality Weekly Report (MMWR).

In other developments, Florida reported more local cases, and its governor—citing inaction by Congress—announced $25 million in funds to help streamline work on a vaccine and new tests.

Earlier this week, the CDC removed its travel restriction for the Wynwood neighborhood after 45 days had passed with no new cases. Authorities are still battling active transmission in a 4.5-square-mile portion of Miami Beach, and health officials today warned that the Zika threat will remain in the region, given the steady stream of infected travelers and mosquito activity expected to persist in the months ahead.

At a media telebriefing today to discuss the developments, CDC Director Tom Frieden, MD, MPH, praised Florida's comprehensive response to the outbreak and said the lessons learned from its experience are helpful, especially because the mosquito is hard to control and there are no vaccines or drugs to protect pregnant women and their unborn babies from Zika virus.

According to the MMWR report, after Florida's first two local cases were detected, intensive ground-based mosquito efforts didn't curb the spread of Zika virus in the Wynwood area. After initial aerial spraying with naled, officials saw an encouraging drop in mosquito populations, but levels bounced back rapidly.

However, officials saw mosquito levels plummet and remain low after they followed naled spraying with Bti (Bacillus thuringiensis israelensis) spraying—a strategy that attacks both adult mosquitoes and their larvae.

She also credited "boots on the ground" efforts to reduce standing water sources with helping bring down the mosquito levels.

Frieden said because the actions weren't part of a controlled study, the findings aren't certain, but he added that, according to the data, the results of the 1-2 punch with the aerial insecticides were striking.

"This really does herald in a new era for a standard of control for local transmission," he said.

In July, federal officials recommended that Puerto Rico consider naled spraying to control the territory's Zika surge, but the governor turned down the proposal in part because of public protests over the potential impact on people and wildlife. Florida's proposed spraying for Miami Beach recently sparked local protests, but authorities went ahead with the plan after seeing the impact the combo-spraying had in Wynwood.

Some vector control experts have aired doubts about whether naled spraying would be effective against Aedes aegypti.

Naled aerial spraying disperses an ultralow volume, less than 1 ounce per acre, in tiny micron-sized droplets that are designed to get underneath bushes and leaves, where it breaks down quickly in the environment. The Environmental Protection Agency has said that, when used according to the label, aerial naled spraying poses no risk to people or the environment.

Frieden said health officials respect the concerns that citizens have about naled, adding that CDC scientists are working on other options.

As part of the outbreak response, Florida and CDC scientists have been monitoring for health problems related to spraying activities by tracking calls to poison information centers and emergency department (ED) visits. According to today's MMWR report, poison control received seven calls, including four that described symptoms. ED patient visits for asthma and other breathing symptoms in the areas where spraying occurred were unchanged compared with the same period the previous 2 years.

The Florida Department of Health (Florida Health) today reported three more local Zika cases, all of them linked to the Miami Beach transmission area. The state has now totaled 95 local cases, as well as 10 in those who contracted the virus after visiting Florida.

With federal support earmarked for the Zika battle still stalled in Congress, Florida Gov Rick Scott yesterday announced the authorization of $25 million in state funds to help speed up work on a vaccine and new diagnostic tests. So far he has used his emergency executive authority to allocate $61.2 million.

"I have traveled multiple times to Washington this year to meet with Congressional leaders to tell them how urgent this need is," Scott said in a statement. "Yet, despite endless claims of support from those within both parties, nothing has been done."