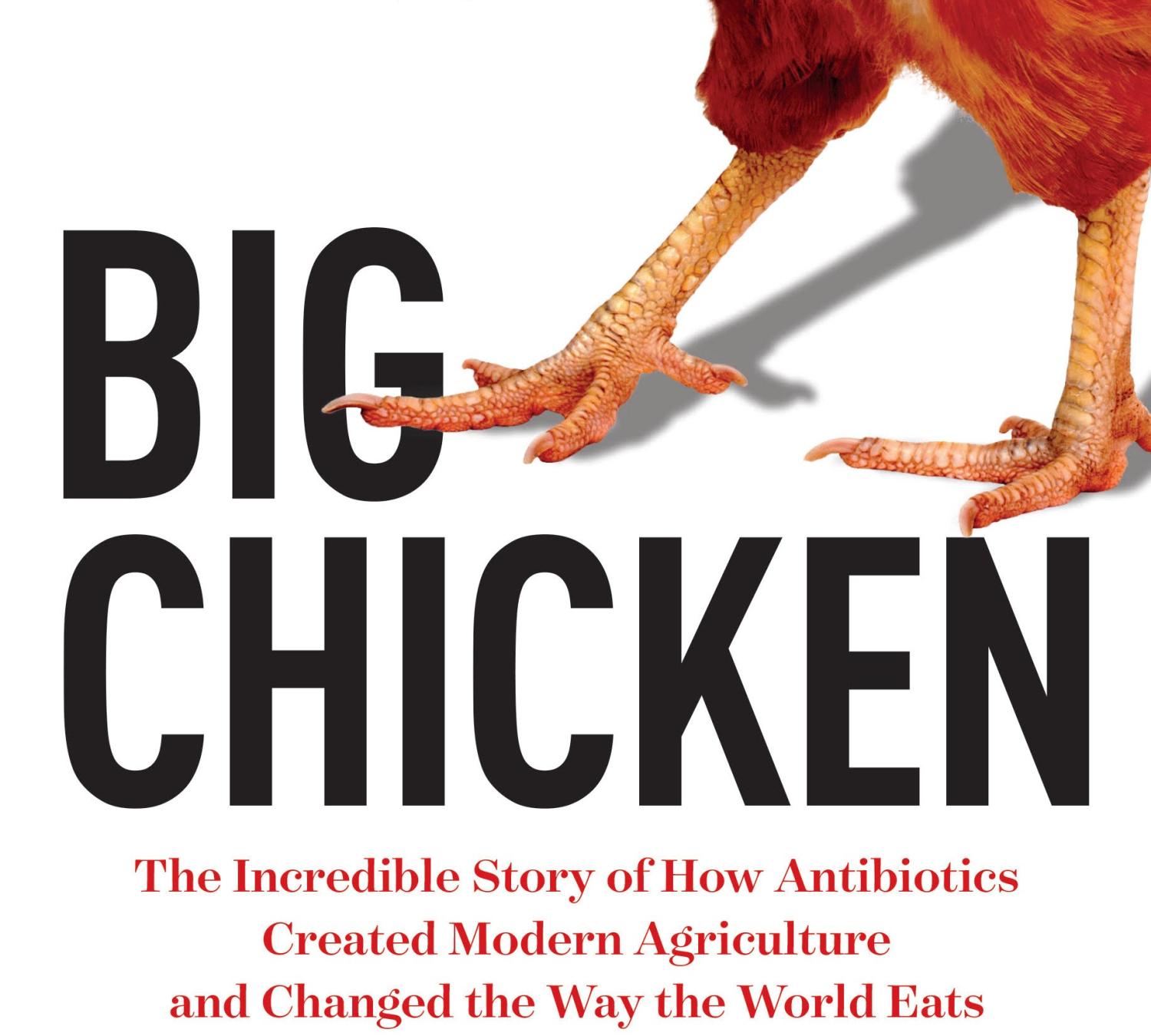 In the prologue to her new book, Big Chicken, journalist Maryn McKenna paints a mouth-watering portrait of a roasted chicken from a sidewalk market in Paris that tastes like "muscle and blood and exercise and the outdoors" and nothing like the chicken she had been eating for much of her life.

The taste of that "sidewalk Paris poulet," McKenna writes, left her both delighted and sad, opening her eyes to how invisible chicken—the most widely consumed animal protein in the United States—had become for her, despite living in one of the leading poultry-producing states in the country (Georgia) and years of covering epidemics and outbreaks that frequently originated in poultry.

She tells that story, she says, not to memorialize the deliciousness of that free-range, antibiotic-free French chicken but to highlight what she considers to be her beat as a journalist: Unintended consequences.

In Big Chicken, McKenna lays out in extensive detail the unintended consequences that resulted from experiments performed at Lederle Laboratories in December 1948 when scientist Thomas Jukes began adding trace amounts of the antibiotic aureomycin (later to be known as chlortetracycline) to chicken feed. The discovery that the drug could quickly fuel growth in chicks raised in confinement revolutionized the poultry industry, turning chicken into America's favorite protein.

"The story of antibiotic use in agriculture at least starts out with good intentions—to restore the damage to the food system caused by World War II, and to feed the world inexpensively," McKenna said in an interview. "And it got us a system of meat production that is incredibly efficient, incredibly consistent, that's very reliable, and that produces a protein that isn't very interesting."

But in addition to creating a blander product, Thomas Juke's experiments and Lederle's quick embrace of chlortetracycline as a growth promoter would also lead to widespread, routine use of antibiotics throughout animal agriculture, chronicles McKenna in the book. And that has produced the most serious unintended consequence: Drug-resistant bacteria that have migrated from food animals to humans and contributed to the emergence of a global health crisis.

McKenna, whose previous book, Superbug, documented the rise and spread of methicillin-resistant Staphylococcus aureus (MRSA), said her interest in the story of antibiotic use in chickens began after that book came out, when she ran across a report that revealed that in 2011, four times as many antibiotics were sold for use in farm animals in the United States as were sold for human use. This came as a shock, she said, since countless doctors, researchers, and MRSA survivors had been telling her about the importance of antibiotic stewardship.

"That just blew my mind," she said. "I was hearing all these messages about how important it was to conserve antibiotics. How were we using them so freely in agriculture?"

The impact of antibiotics on the poultry industry is startling. Prior to the 1940s, McKenna explains in Big Chicken, there was no sustained trade in meat chickens in the United States. Hens were mostly wanted for egg production, and fattened-up roosters—marketed as "spring" chickens—were considered a luxury dish. But the introduction of synthetic vitamin supplements enabled farmers to keep young chickens alive through the winter and created a new agricultural industry—"broiler" chicken production.

Antibiotics, introduced in 1949, fueled explosive growth in that industry by doubling an average broiler chicken's slaughter weight over the next 70 years. Food researchers and marketers made sure there was an ever-growing market for chicken, in all its forms.

The numbers tell the tale. The number of chickens sold for meat rose from 154 million in 1909 to 588 million in 1949 to more than 1 billion in 1954. Today, more than 9 billion broilers are raised in the United States each year.

The price of growth

But as McKenna shows, that explosive growth came with a price for those eating the chickens. From an increase in foodborne outbreaks of antibiotic-resistant Salmonella to a rise in urinary tract infections caused by drug-resistant Escherichia coli strains that are identical to those found in poultry samples, widespread antibiotic use in the poultry industry has had significant consequences for human health.

Among those who paid the price is Rick Schiller, who developed a bloodstream infection from a virulent and antibiotic-resistant strain of Salmonella Heidelberg in September 2013 after eating contaminated chicken from poultry producer Foster Farms. Schiller, among the 634 people affected by the Foster Farms outbreak, survived the Salmonella infection but has had health issues ever since. "I've had nothing but problems since that Salmonella thing," he told McKenna.

And while McKenna (left) initially thought that the role of agricultural antibiotic use in the emergence of drug-resistant human infections had come to light mostly within the past 10 to 15 years, she learned in researching the book that the dangers had been clear almost from the beginning. Staff veterinarians at Lederle Laboratories, she writes, were worried that using chlortetracycline in chickens would encourage antibiotic resistance and opposed using it as a growth promoter. And within a little more than a decade, evidence would start appearing that drug-resistant bacteria from chicken was finding its way into the environment and into humans.

"If you look at the epidemiology of the outbreaks that could be traced back to drug use in farms, then the chain of evidence was quite clear, even in the '60s," said McKenna. More compelling evidence would appear in the 1970s, when a small experiment by Stuart Levy, MD, of Tufts University showed that multidrug-resistant bacteria from chickens raised on tetracycline-laced feed showed up in the stool samples of the family raising them.

But that evidence was not clear enough for the agriculture industry, which pushed back on an effort by the Food and Drug Administration (FDA) in 1977 to ban the use of antibiotics as growth promoters in food animals. As McKenna explains in the book, the economic might of the country's pharmaceutical and animal feed manufacturers, and that of their customers, ultimately outweighed the scientific evidence. It would take the FDA more than 30 years to restrict the use of antibiotics for growth promotion on US farms.

Antibiotic use and misuse in the US poultry industry began to take a turn for the better, however, as McKenna was writing the book, adding another dimension to the story. But unlike in Europe, where regulators started restricting agricultural antibiotic use in the 1980s, change in the United States has been propelled by consumers.

A growing demand for antibiotic-free chicken among chefs, concerned parents, hospital administrators, and school systems has led the country's biggest purveyors of chicken—companies like Perdue Farms and Chick-fil-A—to commit to only buying and selling chicken that has been raised without the use of any antibiotics. Other producers and restaurant chains have followed suit, although some have committed to avoiding only those antibiotics used in human health. Chicken raised with minimal antibiotics, or no antibiotics at all, appears to be becoming the norm.

"I do think that consumer pressure was the thing that really turned the tide here," McKenna said. "The consumer movement…created the space for some companies, such as Perdue Farms, to step out in front of the rest of their industry and say 'yeah, we're going to change.'"

That has created a renewed interest among some chicken producers in the United States to raising birds in a way that naturally restores their immune system. Giving birds more room to exercise, feeding them a varied diet, providing more natural light—these are the type of practices McKenna believes will not only bring back the type of flavor she found in her French market chicken but will also result in a safer product.

"I think deliciousness is a marker for doing agriculture well," she said. "And I think if we start to fold that into the equation of how we raise meat animals, it would naturally lead us away from antibiotics and toward doing things another way."