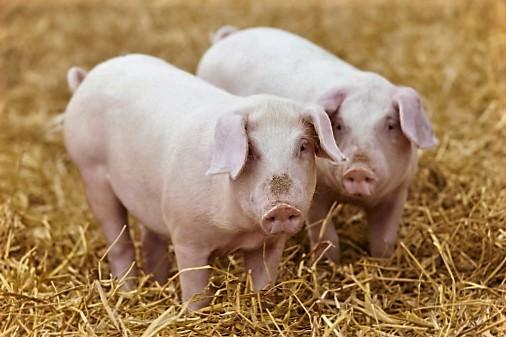 A case report yesterday in Emerging Infectious Diseases is raising questions about a livestock-associated drug-resistant strain of Staphylococcus aureus that has emerged in recent years on pig farms but has rarely been linked to human illness.

The paper describes a 61-year-old Iowa pig farmer who reported a chronic skin infection on his foot, caused by S aureus bacteria, in July 2011. The farmer, who was enrolled in a longitudinal study of S aureus colonization and infection among rural Iowans, provided swab samples of the infection for culturing and molecular analysis. Screening indicated that the patient, who raised swine and cattle and did not wear protective equipment such as gloves or masks, also had S aureus bacteria in his nose and throat.

The molecular analysis identified the isolates from the farmer's wound, nose, and throat as methicillin-susceptible S aureus (MSSA) belonging to sequence type (ST) 398, a strain of the pathogen that's been increasingly reported in livestock, particularly pigs, and livestock handlers over the past 12 years. While the strain was not methicillin-resistant S aureus (MRSA), it did exhibit resistance to several other antibiotics.

Over the next year, the patient provided samples from two additional skin infections that were molecularly similar to the initial samples, although the third infection was resistant to oxacillin, an antibiotic that has replaced methicillin in clinical use. Whole-genome sequencing indicated he was repeatedly being infected by the same strain over the course of 13 months. His wife was colonized by the same strain but reported no infections.

Few infections in the US

Finding a Staph strain belonging to the ST398 lineage in a pig farmer was not a surprise, as the ability of the pathogen to spread from pigs and other livestock to humans has been well established. First reported in the Netherlands in 2004, "pig MRSA" has been recovered from pigs and pig farmers throughout Europe, the United States, Canada, and Latin America.

A previous study of swine production facilities in Iowa and Illinois found MRSA ST398 in 45% of the workers. Interest in the strain, and it's potential to spread among humans, has grown as MRSA has become a pathogen of global concern.

While most of the people found to have S aureus ST398 are colonized and not infected with it, some human infections have been identified, and in 2014 four people in Denmark with no known connection to farming died from MRSA ST398 infections. As a result, European countries are starting to pay closer attention to the strain. But few livestock-associated MRSA infections have been identified in the United States, said Tara Smith, PhD, corresponding author on the report and one of the researchers on the 2011 longitudinal study from which the case report emerged.

"There were no reports of these infections until we went out and actively searched for them," Smith, an epidemiology professor at Kent State University, told CIDRAP News.

Smith said the farmer's infection was unique because it was a repeated infection. In addition, all of the isolates had the t571 spa type, a virulence protein commonly found in livestock-independent ST398 lineages. But whole-genome sequencing proved they were from a "true" livestock strain, said Smith. Finally, while the initial infection was methicillin-sensitive, it was resistant to several other types of antibiotics.

Because of all these factors, Smith and her colleagues wanted to further characterize the isolates and shed some more light on what she thinks could be an underreported issue.

Strain could easily be missed

"If you were doing surveillance just of MRSA you would have completely missed this strain, even though it was causing infections reminiscent of the community-associated MRSA strains we've seen since the '90s," she said. "These are the types of infections that are going completely under the radar, and we really have no idea how common these are in people with livestock contact in the United States."

How the case-patient's wife acquired the strain is a bit of a mystery. While the researchers can't be certain that she was colonized by her husband, they suspect human-to-human transmission because she reported no contact with pigs. Smith and her colleagues also found closely related isolates from three other people enrolled in the study, along with one pig, none of whom were close to one another geographically. So it's unclear if there is a common source of infection, or multiple sources.

Smith, who's been studying ST398 for several years now, said a lot of questions remain about the strain and how widespread it may be. One is whether ST398, which is thought to be less virulent than other S aureus strains, is evolving to become a more successful pathogen in humans.

One way to find out more about the pathogen, she suggested, is to expand surveillance, which currently focuses on invasive MRSA infections and doesn't include MRSA or MSSA skin and other soft-tissue infections.

"Right now, it's not a huge cause of human infection in the United States, but we don't know how much is really out there, because we've only looked at a small slice of these people that are highly exposed," she said.