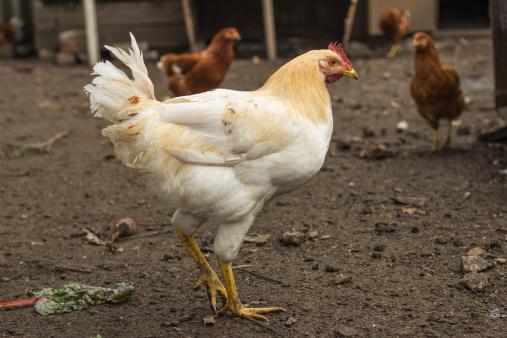 Officials in the Zhejiang province capital of Hangzhou closed live-bird markets to curb the risk of H7N9 transmission from live poultry to people., Shtrunts / iStockphoto

Continuing the slow trickle of new H7N9 cases, China reported five cases over the past 3 days, as well as another death, and Hong Kong researchers today reported genetic findings from the city's first H7N9 patient, which included a mutation that might enhance disease severity.

All of the new cases were reported from Guangdong province, according to provincial health department reports translated and posted by the FluTrackers infectious disease news message board. Guangdong province was responsible for many of the cases that marked the second wave rise and is now one of the few areas still steadily reporting new infections.

Yesterday, Guangdong confirmed an H7N9 infection in a 31-year-old man who is hospitalized in stable condition, according to FluTrackers' translation. Today the province reported four more infections and a death in a previously confirmed case-patient, according to a second translation. The patients include two men, ages 76 and 33, and two women, ages 55 and 75. All four are hospitalized in critical condition.

The provincial health ministry said a patient from Zhaoquing City whose illness was confirmed on Feb 20 died yesterday of respiratory failure. FluTrackers said the patient is probably a 46-year-old woman who had been hospitalized.

The five new cases bump the outbreak total to 370, according to a case list kept by FluTrackers. The newly reported death increases the fatality count to 114. So far there have been 234 illnesses reported during the second wave of H7N9 infections, compared with 136 during the first wave last spring.

In other developments, the World Health Organization (WHO) today confirmed nine H7N9 infections reported from China on Feb 20 and 21. Patient ages range from 29 to 81 years, and seven of them are men. They hail from four provinces: five from Guangdong, two from Hunan, and one each from Anhui and Jilin.

Six of them had been exposed to live poultry before they got sick. Illness onsets ranged from Feb 7 to Feb 15.

One of the patients died, a 64-year-old man from Guangdong province. Of the eight survivors, six are hospitalized in critical condition, one is in severe condition, and one is listed in stable condition.

Today's research report is an analysis of H7N9 samples obtained from the first infection detected in Hong Kong, involving a 36-year-old woman whose illness was announced on Dec 2. She got sick after traveling to the Guangdong city of Shenzhen, where she slaughtered and ate a chicken, according to previous reports. The team published its report in the latest online edition of the Journal of Infection.

The report is notable because information on genetic sequences from illnesses in the second outbreak wave has been scarce. However, the World Health Organization (WHO) said in a Jan 22 risk assessment that lab analysis of H7N9 samples from patients, animals, and the environment collected during the second wave showed they have similar hemagglutinin (HA) and neuraminidase (NA) genes to viruses in the first wave and are similar to the strain recommended for H7N9 vaccine development.

Researchers sequenced an H7N9 sample from the woman's endotracheal aspirate and performed a bioinformatics analysis to compare it with earlier H7N9 viruses. They found that the HA, NA, and MP genes clustered with other human H7N9 strains. Though they found that the PB1, PB2, and NS genes were most closely related to a Guangdong strain isolated in August, they were distinct from other human and avian H7N9 strains.

The team found a unique PA L336M mutation, associated with increased polymerase activity, which may enhance viral replication and disease severity. The team also said the virus is a novel reassortant derived from the Guangdong H7N9 strain.

The woman had been hospitalized in critical condition and needed extracorporeal membrane oxygenation (ECMO) treatment.

Meanwhile, new details emerged today about measures in the Zhejiang province capital of Hangzhou to curb the risk of H7N9 transmission from live poultry to people. Zhejiang, with dozens of cases reported during both outbreak waves, has been the hardest-hit province, amassing 136 cases over both waves. However, the province has not reported a human H7N9 case since Feb 12.

City officials in Hangzhou shuttered the main poultry markets on Feb 15, some of them permanently, according to a report today from Shanghai Daily, an English-language newspaper. Live poultry markets in five Hangzhou districts are permanently closed, and those in two outlying districts are closed for 3 months. The city's poultry ban also bars the transport of live poultry on public transportation and the raising of poultry in urban areas.

The city's trade bureau is working with supermarkets and wholesalers to build a system for selling frozen poultry, though the city's residents prefer live poultry, because they perceive that it is fresher and healthier, according to the report. To address consumers' safety concerns about frozen poultry, authorities are developing a tag for frozen poultry to show that it has passed rigid inspection and quarantine.

Hangzhou authorities are also planning to build large slaughterhouses away from the main urban area as a way of reducing residents' exposure to live poultry, the report said.

In other developments, a Taiwan-based vaccine maker said last week that it will launch the second phase of human trials of its H7N9 vaccine in March and expects to begin mass production in June when the studies are completed, China News Agency (CNA) reported on Feb 21.

Adimmune, Taiwan's only human vaccine producer, said it will be able to make 3 million doses of vaccine per month, once production starts. The company said it will continue developing the vaccine even if Taiwan's government doesn't purchase it.