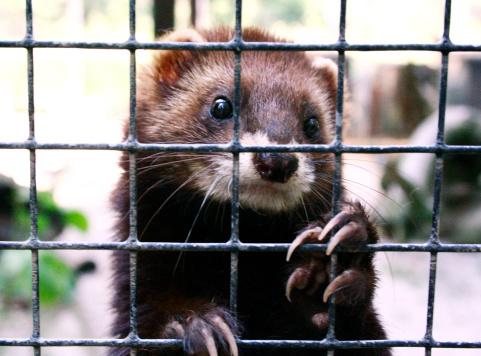 A study that increased transmissibility of H7N1 in ferrets prompted concerns over its "dual use" potential, reminiscent of controversial H5N1 studies published in 2012. , Lumiphil / iStockphoto

In research that prompted a special review because of "dual use" concerns, scientists conducted experiments that increased the transmissibility of an avian influenza H7N1 virus in ferrets, according to a report released this week in the Journal of Virology (JVI).

Aiming to identify mutations that might lead to a pandemic strain of H7N1, a subtype not known to infect humans, the scientists serially infected ferrets with the virus. After 10 "passages" in ferrets, the virus had acquired five mutations and was able to spread among them by air without losing any of its virulence along the way, according to the report.

"Our results demonstrate that a highly pathogenic avian H7 virus can become airborne transmissible in a mammalian host, and support ongoing surveillance and pandemic H7 vaccine development," say the authors, led by Troy C. Sutton, MSc, PhD, of the University of Maryland's Department of Veterinary Medicine and the Virginia-Maryland College of Veterinary Medicine.

The study is reminiscent of two studies on H5N1 virus transmissibility that sparked heated controversy in 2012. In those cases, experiments led to mutations that enabled H5N1 viruses (or in one case, an H5N1/H1N1 reassortant) to spread by the airborne route in ferrets. The studies prompted prolonged discussion of risks associated with conducting and publishing "dual use research of concern" (DURC), meaning studies yielding findings that can be used for good or ill.

Because the H7N1 study fell in the realm of potential DURC, it prompted special reviews both before and after it was submitted to JVI, the journal's editors wrote in a companion editorial. In both cases, the reviewers, who included US government officials, disagreed on whether the study met the DURC definition, but they felt the benefits of publishing it outweighed any risks, according to the editors.

However, one expert, David A. Relman, MD, of Stanford University, who is a member of the National Science Advisory Board for Biosecurity (NSABB), told CIDRAP News that the benefits of publishing the research do not appear to outweigh the risks.

And in a separate commentary published in the same journal, the editors and other experts call for setting up a national board to assess DURC, saying this would provide for a more effective approach to managing and reporting such research.

The authors of the new study, including several from Italy, note that although no H7N1 infections have been reported in humans, several other H7 viruses have caused human illnesses. Most notably, H7N9 has circulated in China for the past year, causing more than 400 cases and more than 100 deaths.

They write that advance knowledge of the "molecular changes or signature" required for airborne transmission of an avian flu virus would enable scientists to identify pandemic vaccine seed stocks, screen antiviral compounds, and eradicate poultry flocks that harbor threatening viruses. Therefore they sought to find out if a highly pathogenic H7N1 virus could become "airborne transmissible" in ferrets.

The researchers used an H7N1 strain isolated from ostriches in Italy in 2000. They found that after 10 passages in ferrets, the virus had the ability to infect healthy ferrets housed near but not in direct contact with infected ones. The passages resulted in four mutations in internal genes (polymerase PB2, nucleoprotein, and matrix protein) and a "minimal amino acid mutation" in the stalk of the hemagglutinin protein, a surface protein that is recognized by the human immune system.

Mutations that increase a flu virus's transmissibility may reduce the severity of disease they cause, but that didn't happen in this study. "Transmission was not associated with a loss of virulence," the report says. "These findings highlight the importance of the internal genes in host adaptation and suggest that natural isolates carrying these mutations be further evaluated."

In the companion editorial, three JVI editors describe the reviews that preceded publication of the study. The authors are Editor Terence S. Dermody, Editor-in-Chief Rozanne M. Sandri-Goldin, and Thomas Shenk, chair of the American Society for Microbiology (ASM) Journals Board. (ASM is the publisher of the journal.)

Before it was submitted to the journal, the paper underwent a DURC evaluation by the University of Maryland's Institutional Biosafety Committee (IBC) and the US National Institute of Allergy and Infectious Diseases (NIAID), according to Dermody and colleagues.

Those two groups agreed that the study involved an agent and one of the types of experiments specified in the US DURC policy, the editors write. But the IBC and the NIAID differed on whether the study's results met the DURC definition spelled out in the policy. Neither group, however, recommended against publication.

Once the study was submitted for publication, it underwent a standard peer review and a DURC evaluation by ASM senior editors. In that process, ASM held a teleconference of the editors and National Institutes of Health (NIH) officials, who presented the views of the Department of Health and Human Services (HHS), the editorial explains.

"Consensus was not reached about whether the work represents DURC," it states. "However, the participants concluded that the benefits of publishing the paper outweighed any potential risks, and ASM decided to move forward with publication."

The editors also commented that a DURC designation should not necessarily preclude conduct of the research or publication of the findings. They added that their careful assessment of the risks led to the conclusion that the findings represent "an important contribution to an understanding of influenza virus transmission with the potential to limit human influenza illness."

The editors also observed that the researchers took steps to reduce risks. They started with an H7N1 strain that was adapted to avian rather than human cell receptors, that is susceptible to oseltamivir (Tamiflu), and for which there is an experimental vaccine. Also, they worked in an animal biosafety level 3 (BSL-3) laboratory that is appropriate for highly pathogenic avian flu.

But the publication of the study was critiqued by Relman, a Stanford professor of microbiology and immunology and of medicine. As a member of the NSABB, Relman was involved in the controversy over publication of the two H5N1 transmissibility studies in 2012 and has been skeptical of the benefits of such studies. The NSABB initially recommended against publication of the full details of the studies, but it later reversed its position (though not unanimously) after the authors briefed the group and made some clarifications in their manuscripts.

Relman said the H7N1 study clearly qualifies as DURC, because the information could be used to cause harm, but he agreed that defining research as DURC does not automatically mean it shouldn't be published.

He acknowledged that the authors took steps to reduce risks, including starting with a virus not adapted to mammals. "They also did not deliberately engineer-in mutations—although this comment only has relevance if one believes that serial passaging is somehow a bit more similar to natural evolutionary processes," he added.

"On the other hand, the benefits in my mind are minimal at best," Relman said. "Serial passaging in a non-natural host is artificial, and may not reveal the same mutations in the same combination as might occur in nature. Thus, arguments about benefit in terms of enhanced surveillance abilities are dubious in my mind.

"The mere fact that it was possible to create virus with enhanced respiratory transmissibility may be worthy of notice, but that does not mean that the details and the exact mutations need to be published. There are no benefits in terms of vaccine development because the authors learned nothing that enhances vaccine development.

"All in all, I personally do not think that the benefits outweigh the risks of this particular experiment," Relman said. "The risks are that someone will use the mutation data to deliberately engineer an H7N1 strain to cause harm in mammals and humans in particular. The efforts at biosafety (containment) have no bearing on the risks from the information being shared widely."

He also commented that risk-benefit assessments concerning DURC should include scientists who are not influenza experts as well as representatives of other segments of society. "Further, the process here does not appear to have been open and transparent for public review," he said.

Needed: A national DURC review board

A special federal advisory board to assess DURC might help answer the difficult questions raised by such research, according to the other commentary accompanying the H7N1 study. Its authors are Dermody; Sandri-Goldin; Shenk; Arturo Casadevall, MD, PhD, editor-in-chief of mBio; and Michael J. Imperiale, PhD, another JVI editor.

Casadevall, first author of the commentary, and Imperiale, like Relman, are members of the NSABB.

As things stand now, journal editors are the sole arbiters of whether manuscripts describing DURC should be published, the authors say. They note that the NSABB, which established the criteria for DURC, is not set up to routinely advise editors on such decisions.

Although the definition of DURC is clear, editors have to make a judgment call about whether research findings can be "directly misapplied to pose a threat to society," and they may not feel qualified to do that, the authors say. And if they reject a paper, it may well be submitted to another journal, "with no guarantee that the information would be handled responsibly."

The commentators note that in the 1970s, worries about recombinant DNA research led to the formation by the US government of the Recombinant DNA Advisory Committee (RAC), which reviewed and gave advice on research involving recombinant DNA and synthetic nucleic acids. The RAC proved to be "an unqualified success" that helped pave the way for numerous useful drugs and a thriving biotech industry, the authors say.

"The situation today calls for the establishment of a federal advisory board modeled on the RAC for the assessment of DURC," they write. "We think this is a government responsibility since only the government has the resources necessary to insure adequate threat assessment reviews."

They further predict that such a board would quickly gain experience, which would lead to better advice for dealing with DURC in the life sciences. It would be "an invaluable national resource for shepherding the field working with highly pathogenic organisms."

Casadevall A, Deermody TS, Impreiale MJ, et al. On the need for a national board to assess dual use research of concern (DURC). J Virol 2014 (early online publication Apr 2) [Introduction]