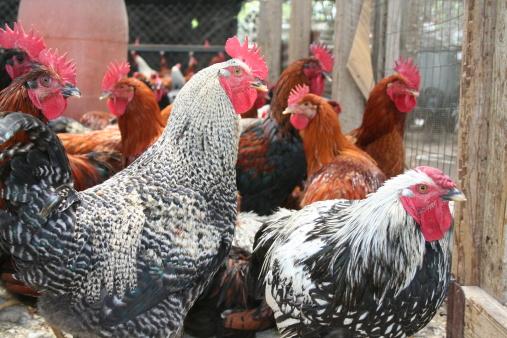 All three patients in a family cluster reported today worked in a live-bird market and may have been exposed to H7N9 via poultry., Lisa Nguyen / iStockphoto

The steady rise in H7N9 influenza cases saw no let-up today, with seven new infections reported, including a fatal case from Hong Kong, the first case detected in China's Guangxi province, and five cases reported from the country's other hotspots.

Health officials today also reported the first known family cluster in the outbreak's second wave, involving a couple who worked a vegetable stall in a market in Zhejiang province and their adult daughter.

The patient from Hong Kong, its fourth so far, is a 75-year-old man who got sick on Jan 26 while visiting the city of Shenzhen on China's mainland and was hospitalized in Hong Kong yesterday, according to a statement today from the Centre for Health Protection (CHP). The man, who had multiple underlying health conditions, died this morning.

He had traveled by himself to Shenzhen, where he spent 6 days at the home of a relative who lived close to a live-poultry market, the CHP said. So far the patient's five family contacts in Hong Kong are asymptomatic.

The man's H7N9 case is the fourth to be detected in Hong Kong, and so far all had a history of recent travel to the mainland. Three of the patients died from their infections.

Elsewhere, Guangxi province (Guangxi Zhuang Autonomous Region) announced its first H7N9 case today, in a 56-year-old woman who is in serious condition, according to a translation of a China News Network story posted by Avian Flu Diary (AFD), an infectious disease news blog.

The detection of the case pushes the range of the known cases south and west of the main outbreak area and near the border of northern Vietnam.

The woman is a farmer and had been exposed to live poultry before she got sick, according to the story. She is hospitalized in the city of Hezhou in critical condition.

The five other new cases reported today are from Zhejiang, Guangdong, and Fujian provinces, all of which have already reported cases. Two of the patients are young and appear to have milder illnesses.

According to translations of provincial health statements posted by AFD, three patients from Zhejiang province are a 37-year-old man in critical condition and two men ages 60 and 63 who are in severe condition. Guangdong province's case-patient is a 17-year-old boy listed in stable condition, and Fujian province's case involves a 2-year-old boy who is hospitalized with a mild infection.

The seven new cases today lift the outbreak total to 267, according to a case list compiled by FluTrackers infectious disease message board. and the Hong Kong man's death raises the unofficial fatality count to 58. They also bump the number of illnesses reported in the second wave to 131, just five shy of matching the 136 cases reported during the first wave last spring.

The family cluster reported today involves three people from Zhejiang province, a 49-year-old man, his wife, and their 23-year-old daughter, according to a report from Xinhua, China's state news agency. All three cases were previously reported.

The man's infection, which ultimately proved fatal, was confirmed on Jan 20. His daughter got sick 3 days after taking her father to the hospital, and she is in serious condition.

The man's wife's infection was confirmed on Jan 27, and her illness is mild, according to Xinhua.

Media reports in China yesterday, citing officials from China's Center for Disease Control and Prevention, said the parents are from Xiaoshan and worked as vegetable dealers in a live-bird market before they got sick and that their daughter had worked at the market for a short time, the South China Morning Post, an English-language newspaper based in Hong Kong, reported today.

Health officials investigating the infections aren't sure if the cases reflect human-to-human spread or if all involve exposure to a live-poultry source, the report said. A few family clusters were reported during the first H7N9 wave last spring, and health officials have said limited human-to-human transmission could occur, especially during prolonged unprotected contact with sick people.

However, the World Health Organization (WHO) and other health groups have said so far there is no evidence of sustained human-to-human spread, and scientific studies suggest that so far the virus doesn't transmit easily through airborne spread.

In a related development, the WHO today released new information on six H7N9 reports, including one death, that it received from China on Jan 27. Patient ages range from 58 to 77, and all had been exposed to live poultry before they got sick. Their illness onsets range from Jan 15 to Jan 21.

The patient who died is a 68-year-old man who worked as a farmer in Guangdong province. The five survivors are all hospitalized in critical condition.

The WHO said the report of H7N9 in live poultry in Hong Kong that was imported from the mainland shows the potential for the virus to spread through live poultry, but so far there is no sign of international spread through humans or animals.

More sporadic cases are expected in affected and possibly neighboring areas, due to increased trade and transport of poultry around the Lunar New Year, the agency added.

In other developments, Sinovac Biotech, Ltd., a pharmaceutical company based in Beijing, announced today that it has submitted a clinical trial application with China's Food and Drug Administration to launch a human clinical trial of its H7N9 vaccine.

The company said in a press release that the H7N9 vaccine is being developed using the same platform and production system as its seasonal flu, H5N1, and 2009 H1N1 vaccines. Sinovac said it has completed its preclinical studies, has prepared different vaccine candidates for clinical testing, and will start the human trials in a timely manner, once its application is approved.