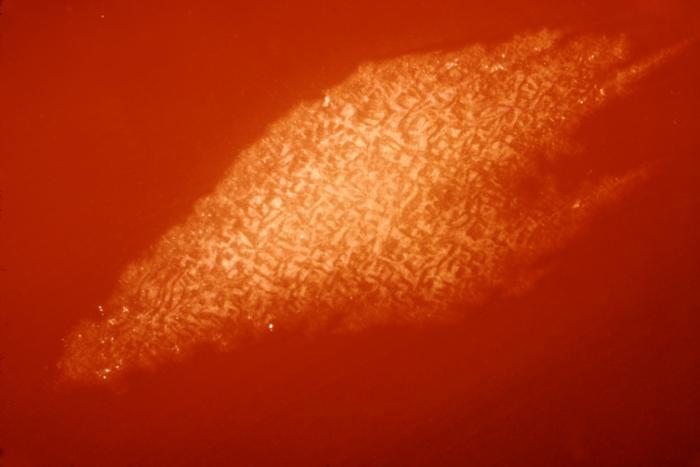 A colony of Clostridium botulinum under high magnification., CDC

When a team of California researchers reported a new type of botulinum toxin in 2013, they withheld genetic data on the lethal toxin out of concern that malefactors could use the data to make the toxin before an effective antitoxin could be developed.

The report stirred considerable interest. It was not only the first report of a novel botulinum toxin in more than 40 years, but it was also a rare example of researchers taking the initiative to limit publication of data out of concern about potential "dual use" of their findings.

But last week it came to light that the novel toxin isn't quite the threat it was described as. Researchers from the Centers for Disease Control and Prevention (CDC) and the University of Wisconsin (UW), writing in the Journal of Infectious Diseases (JID), said it turns out that the novel toxin can be blocked by available antitoxins after all. That suggests that it isn't really a novel toxin, the authors said.

In a commentary accompanying the new JID report, Paul Keim, PhD, a genetic analysis expert at Northern Arizona University, said the handling of findings about the new toxin showed that some aspects of US policy on "dual use research of concern" (DURC) worked well, but others not so well.

The new findings come as the US government is preparing to push institutions that receive federal funding to identify and regulate studies that fall in the DURC category, with a policy on the issue due to take effect in September. At the same time, the government is working to frame a policy on one type of DURC: experiments that may make a virus or bacterium more dangerous.

Last October the Obama administration suspended funding for some "gain of function" studies, as they are known.

Before the 2013 report, Clostridium botulinum was known to produce seven types of toxins, dubbed A through G, all of which cause paralysis by blocking neurotransmitters in humans and animals. The last one was discovered in 1970. Antitoxins are available for all seven and packaged in a product called BAT.

The novel toxin was identified by researchers with the California Department of Public Health (CDPH), who discovered the toxin as a result of a case of infant botulism. The patient had a novel strain of C botulinum, called IBCA10-7060, which produced two toxins—type B and the novel toxin. The researchers named the latter botulinum neurotoxin type H, or BoNT/H.

On finding that the toxin wasn't susceptible to available antitoxins, the authors judged that it posed a serious risk. They consulted with several US government agencies, including the CDC, on their way to deciding to withhold the genetic sequence data. JID, in publishing their report, made an exception to its general policy of requiring authors to submit gene nucleotide sequences to a public database and include the accession numbers in their manuscript.

The new JID study says the CDC-UW team set out to evaluate the novel toxin by testing it against available antitoxins in mice and in lab cultures of neuronal cells. They found that it could be completely blocked by using a combination of the type A and B antitoxins. BAT, which contains both types, was effective against the toxins both in mice and in cell culture.

Antitoxin combinations that did not include both types A and B did not neutralize the toxicity of the novel C botulinum strain, which shows that type A and B antitoxins were specific for the novel toxin and the type B toxin, respectively, the researchers wrote.

Susan E. Maslanka, PhD, first author of the report, said the reason for the contrasting findings of the California group and the CDC-UW group may lie in a difference in potency between the antitoxins used. She leads the National Botulism Laboratory Team in the CDC's Enteric Disease Laboratory Branch.

She told CIDRAP News that the California team used an older therapeutic antitoxin developed by the US Department of Defense (DoD), whereas her group used BAT, the heptavalent product recently licensed by the Food and Drug Administration (FDA). The DoD kept the antitoxin for potential use in troops but never moved to license it, she commented.

Although the two products were developed with similar potencies, the DoD antitoxin may have been less potent when it was used in the California study, Maslanka suggested. "That's just my guess. That certainly could be an explanation of why there were differences," she said.

Sequence was released months ago

The CDC-UW researchers also were able to examine the genetic sequence of the novel antitoxin. As it turns out, the sequence was released last December with the publication of a report by FDA scientists in the journal Genome Announcements. At the time, there apparently had been no published report that available antitoxins were effective against the novel toxin.

But Maslanka explained that the FDA authors were aware of the CDC group's findings. "Certainly the FDA was already aware of some of the studies we were already doing and that we'd been preliminarily able to neutralize this toxin with serotype A antibodies," she said. "In our mind, the fact that it was neutralizable with A antitoxin made this a less risky toxin to release the DNA sequence."

That was confirmed by Marianna Naum, a policy analyst with the FDA's Office of Foods and Veterinary Medicine. "We consulted with our CDC partners" in publishing the report, she told CIDRAP News.

The CDC-UW group compared the novel toxin's genetic sequence with the sequences of other botulinum toxins. Their analysis revealed that the toxin has a "hybrid-like structure" that contains regions similar to toxins A1 and F5 (subtypes of toxins A and F).

Summing up, the report says, "The novel BoNT is a serotype A variant consisting of a hybrid structure between bont A1 and F5, which can be neutralized with existing serotype A antitoxin. Further studies, using purified toxin, are necessary to assign the appropriate nomenclature to this novel BoNT and to further characterize its risks."

Commenting on the naming issue, Maslanka said, "In general serotypes have been identified by the lack of neutralization by available antitoxins, so the fact that serotype A antitoxin neutralizes this suggests that serotype H is not the appropriate nomenclature."

"The botulism community is not totally in agreement on how to move forward on naming toxins within a serotype which may have DNA variability," she added.

In the accompanying commentary, Keim drew some lessons for DURC policy from the handling of the findings about the novel C botulinum strain and its toxin.

He wrote that the California research team "was conscious of DURC potential and took the initiative to mitigate it," demonstrating a "culture of responsibility among life sciences researchers."

In addition, Keim said, "The review processes for identifying DURC at a scientific journal worked, and JID offered an effective solution to a DURC dilemma—redact the information that would enable malevolent actors while disseminating the warning of danger."

He added that the new C botulinum strain was distributed to other "qualified and federally vetted researchers in a restricted fashion," following the Select Agent and Toxin regulations on the handling of dangerous agents. This approach enabled other scientists to test the original findings without giving malefactors a chance to capitalize on them.

Keim is also former chair of the National Science Advisory Board for Biosecurity, which oversees DURC issues for the US government.

On the negative side, Keim said he and some others thought that the novel strain could have been distributed to other labs sooner—perhaps even before publication of the original articles.

"With critical national security and public health at stake, it is unethical to impede research competitors for personal, professional or commercial motives," he wrote. "Likewise, excessive government regulation is not helpful if it slows the progression of countermeasure development."

Keim also took exception to the decision to completely withhold the genetic sequence. He argued that the sequence could have been distributed confidentially, using material transfer agreements, and that this would have greatly helped research teams that were trying to understand the novel toxin and develop countermeasures.

"In the end, the genome sequence had to be re-determined to allow access to the broader researcher community," he wrote.

Given that sensitive information is routinely protected in the healthcare and financial systems, Keim added, "We should be able to distribute sensitive information among the research community. To insure that this is not abused for academic or competitive research interests, such data could be handled by a non-conflicted third party or have a sunset clause requiring its ultimate release.

"This approach is achievable and should be the policy goal for government and for non-government research institutions."

In reply to a query from CIDRAP News, the CDPH, whose staff first reported the new toxin, today offered a brief statement in response to Keim's comments:

"Discovery of the type-H toxin presented a situation that was unusual for CDPH. The department does not typically identify agents that are potentially novel and/or of national security significance. Since there was no immediate threat, CDPH chose to proceed carefully to prevent any possible threat to public health and security. CDPH transferred the governance over the new strain to the federal government."

Sep 25, 2014, CIDRAP News story on US DURC policy for institutions