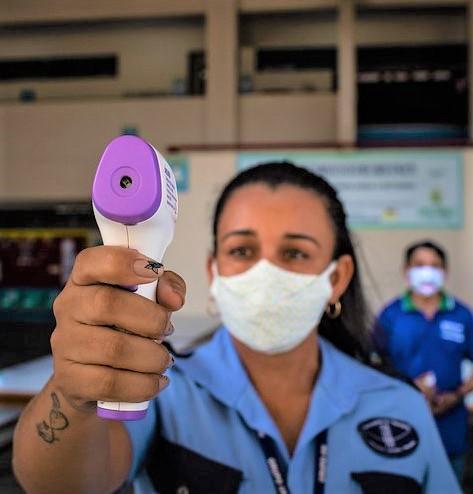 Brazil's Fiocruz Institute yesterday sounded an alarm that the country's pandemic situation is worsening, as health officials in Europe warned that virus activity is surging again in central and eastern Europe, with virus levels also on the rise in western parts of the region where rates are already high.

Brazil warning based on multiple markers

In a special bulletin yesterday, the Fiocruz Institute warned that for the first time in Brazil, several indicators are worsening simultaneously, with intensive care unit (ICU) bed occupancy above 80% in 19 of Brazil's 27 federal districts. The statement was translated and posted by Avian Flu Diary, an infectious disease news blog.

The country is experiencing intense transmission, which started in January, with growing numbers of cases and deaths, high test positivity rates, and overloaded hospitals, which Fiocruz calls an "alarming scenario."

For the second day in a row yesterday, Brazil reported a daily record for COVID-19 deaths, with 1,910 fatalities reported and a partial lockdown ordered for Sao Paulo state, according to France 24.

Two SARS-CoV-2 variants, P1 and P2, are circulating in Brazil, and variant activity has been linked to a second massive surge in hard-hit Manaus, in the country's Amazonas state.

Fiocruz said there are uncertainties surrounding the two new variants, such as their impact on reinfection and vaccine efficacy. They called for a national agenda to battle the pandemic and said government officials need to adopt more rigorous mitigation steps.

The Fiocruz warning came the same day the Pan American Health Organization (PAHO) warned that surging cases in the north Amazon basin of South America are overwhelming some of the region's health systems.

At a briefing today, the head of the World Health Organization (WHO) European regional office Hans Henri Kluge, MD, MPH, said new cases in Europe last week rose 9%, ending a promising 6-week decline, and more than half of the region is experiencing increasing COVID-19 numbers.

Cases are surging in central and eastern Europe, but are also rising in several western European nations where levels are already high, he said.

Kluge said high transmission rates and the rapid spread of variants require countries to get back to basic steps that are known to curb the spread of the virus, such as improved testing and isolation, along with contact tracing and quarantine. He also said countries need to do more to re-engage with communities and counter pandemic fatigue.

Other measures include a gradual evidence-driven reopening of countries and a speedier rollout of vaccines, Kluge said. So far, 45 countries in the region have launched vaccination programs, with 1.9% of the population in 40 countries vaccinated.

In related developments, German lawmakers yesterday agreed to a 5-step plan to ease restrictions, with an emergency brake if the pace of new infections picks up, according to Reuters. Cases have been creeping upward and the country's immunization campaign is going slower than expected.

They say vaccine makers shouldn't have to conduct lengthy clinical studies, but would need to provide robust evidence that the modified vaccine prompts an immune response and meets safety and quality standards. The approach they suggest is similar to the regulatory process used for seasonal flu vaccines, which need modifications annually to adapt to changes in circulating strains each year.

In other vaccine news, the European Medicines Agency today said it has started a rolling review of Russia's COVID-19 vaccine, Sputnik V, developed by the country's Gamaleya National Center of Epidemiology and Microbiology. In Canada, the country's vaccine advisory group recommended extending the COVID-19 dose interval from 6 weeks to 4 months, and Sudan yesterday became the first country in the Middle East to receive shipments of vaccine through COVAX, a program led by the WHO and its partners aimed at ensuring equitable distribution of vaccines.