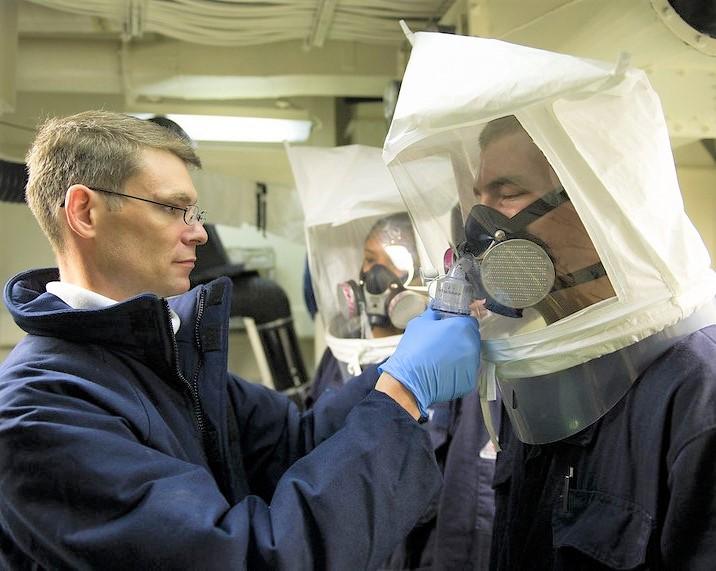 Since the beginning of America's battle with the novel coronavirus, N95s, the close-fitting respirators worn instead of face masks to protect frontline workers from infectious aerosols and respiratory droplets, have been in short supply.

The respirators, most manufactured by 3M and Honeywell, are used globally and act as the crux of personal protective equipment (PPE) for hospital staff.

Traditionally they are donned and discarded after a single patient examination, but shortages and supply chain issues during the pandemic  have resulted in countless stories of doctors and nurses reusing a single respirator per shift. The shortage has prompted the Centers of Disease Control and Prevention to recommend that respirators be reserved for aerosolizing procedures only.

But rather than accepting the new normal, industrial hygienists, hospitalists, and other healthcare professionals have embraced new technologies and old equipment in an attempt to work around the N95 shortage, and they suggest that health systems do the same before a second wave of infections threatens to overwhelm hospitals.

Until the of end of March, doctors and nurses working at Barnes-Jewish Hospital in St. Louis were extending the use of N95s to last whole 12-hour shifts, but shortages were never-ending.

Shaina Eckhouse, MD, an assistant professor of surgery at Washington University School of Medicine in St. Louis, began exploring various ways N95s could be reused safely. The University of Nebraska Medical Centers had pioneered using ultraviolet light to decontaminate respirators, and the Food and Drug Administration had just granted several Emergency Use Authorization for a vaporized hydrogen peroxide (VHP) technique that would kill virus particles on the respirators.

Within less than a week, Eckhouse and her colleagues decided VHP would make the most sense for Barnes-Jewish, and they quickly built a facility within the hospital to decontaminate respirators.

"Each doctor has their own mask, and it's decontaminated within 24 hours," Eckhouse told CIDRAP News. "We do 1,500 masks per day and support our entire health system, which includes 10 different hospitals."

The N95s do not have to be refit for each provider after they are decontaminated, said Eckhouse, a benefit appreciated by busy physicians. Each respirator can be decontaminated up to 20 times, if needed. Right now, Barnes-Jewish employs two VHP associates to facilitate drop-off and pick-up of respirators.

"Right now the VPH will help us get back to baseline and normal more quickly," said Eckhouse, who also noted that the technology has helped staff move from a week's to a month's supply of N95s for staff.

Lisa Brosseau, ScD, a national expert on respiratory protection and infectious diseases, said that, as states begin to open, and hospitals begin to restart elective procedures—all against a backdrop of continuing COVID-19 cases—it's not clear if relying on decontamination of N95s is the best path forward.

"Normally doing anything to a respirator negates its qualifications," Brosseau said, "While I imagine it might be successful for a few donnings, I don't think anyone understands what any of this means."

Instead of decontamination, which is a stopgap measure at best, Brosseau said she’s been trying hard to sell people on the idea of replacing N95s with reusable respirators, or elastomeric respirators, which have been used in construction and industrial settings for more than 75 years.  These respirators, which filter out even more particles than N95s, were designed for reuse.

"If everyone had one of those we could stop worrying about decontaminating N95s," Brosseau said. "The filters last forever, and they would be fine way beyond a pandemic."

Elastomerics cost between $20 and $50 a piece, compared with $2 or $3 per N95, but a single elastomeric s can be used for much longer than a year, as long as they are well cared for.

"This strikes me as the obvious solution," Brosseau said.

Mark Catlin, an industrial hygienist and the former occupational health and safety director of the Service Employees International Union, said there have been two main obstacles to elastomerics. "The first is cosmetics; people are afraid they will terrify patients," he said, explaining that an elastomeric looks less like a surgical mask than an N95 does, and it can often be black and snout-like. "But in a setting like COVID-19, we don't think patients would be worried."

Second, Catlin said, was the fear that the respirators were hard to decontaminate. "But that objection was against the backdrop of using one N95 per patients and discarding. Now our healthcare facilities make an N95 last all day. So the two major objections don't really exist anymore."

In 2009, the H1N1 influenza pandemic also revealed a shortage of N95s. At that time, the University of Maryland medical system decided to make the switch to elastomerics. Maryland, along with the Texas Center for Infectious Disease and the Allegheny Health Network (outside of Pittsburgh), are the three most notable health systems in the country that use elastomerics.

Stella Hines, MD, MSPH, is an assistant professor of medicine at the University of Maryland, specializing in occupational and pulmonary medicine.

"What we are experiencing now is not surprising," she said of the N95 shortage. "But we are not experiencing shortages now, with centralized PPE distribution centers that use a mix of N95s, elastomerics, and PAPRS [powered air purifying respirators]."

Hines said Maryland has fit-tested 7,000 people in the past 2 months for elastomerics. She said surveys and studies of physicians shows that they acknowledge elastomerics provide more protection than N95s, but do find them more difficult to talk in.

"It is one solution to addressing these PPE problems," Hines said.