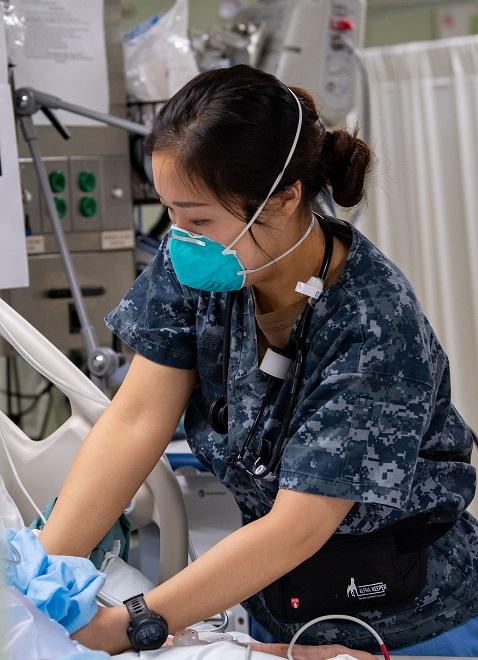 Since the beginning of the COVID-19 pandemic, South Korea has been hailed as a model for other countries, using extensive testing and tracing to keep COVID-19 cases low.

But a surge in infections that began in October and is centered around the capital city of Seoul has the country on the verge of its first nationwide lockdown.

"Our back is against the wall," South Korean President Moon Jae-in said yesterday during a meeting at the Central Disaster and Safety Countermeasures Headquarters, according to Reuters. "This is a crucial moment to devote all our virus control capabilities and administrative power to stopping the coronavirus spread."

The meeting came on a day that the Korea Disease Control and Prevention Agency reported 1,030 new coronavirus infections, 1,002 of which were locally transmitted. Moon has ordered the mobilization of the police, military, and medical community to help stop spread of the virus.

If South Korea moves to its third level of physical distancing measures, schools throughout the country would switch to remote learning, only essential workers would be allowed in offices, and gatherings of more than 10 people would be banned. Schools in Seoul and the surrounding areas will go online starting tomorrow.

South Korea is far from the only country considering stricter measures to reduce the spread of the virus, which continues its global surge. As the BBC reports, London will soon join other areas of England under the government's "tier three" rules—its strictest restrictions on social contacts. The move was made to slow "sharp, exponential rises" in COVID-19 in and around the city, UK health officials said.

Under tier three rules, people are restricted from mixing indoors with those outside their household or bubble, pubs and restaurants must stay closed except for takeout and delivery, and indoor entertainment venues are closed. The rules will go into effect Dec 16.

Also closing down on Dec 16 is much of Germany, which will shut down nonessential stores, schools, and daycare centers until at least Jan 10, Deutche Welle reported. On Sunday, Germany's Robert Koch Institute reported 20,200 new infections and 321 deaths. The country's intensive care unit capacity is also at a critical level.

"The health system is under heavy strain, and our aim has always been to avoid an overloading of the health care system," Prime Minister Angela Merkel said.

The prime minister of the Netherlands, after seeing new infections climb by almost 10,000 yesterday, announced today that the country will go into a 5-week lockdown that will close schools, shops, and public places and limit indoor gatherings to no more than two people from outside the home.

"The Netherlands is closing down," Prime Minister Mark Rutte said in a televised address, according to Reuters.

Italy, which passed England over the weekend as the European country with the highest death toll from the COVID-19 pandemic, is also considering implementing new restrictions over the holidays. Reuters, citing Italian media sources, reported that the government may put the country under partial lockdown from Dec 24 to Jan 2.

Italy has already banned movement between cities and towns over the holidays, except for work, health reasons, or emergencies.

"The pandemic has reminded all of us of the heroic work that health workers do every single day," Tedros said in his opening statement, citing data showing that healthcare workers have accounted for 14% of the world's COVID-19 infections.

"More than 1 billion students in almost every country have been impacted by school closures; and 1 in 6 young people worldwide have lost their jobs during the pandemic," he said.

To help address the pandemic's impact on young people, Tedros announced that the WHO is joining with six global youth organizations and the United Nations Foundation to launch the Global Youth Movement for Generation Disrupted, an initiative that aims to support young people and involve them in the COVID-19 response. The groups are asking governments, businesses, and policy makers to back the effort.

"We hope that it will become a platform for supporting progress towards other health goals, including universal health coverage," Tedros said. "The voice of the youth for health for all is very crucial."