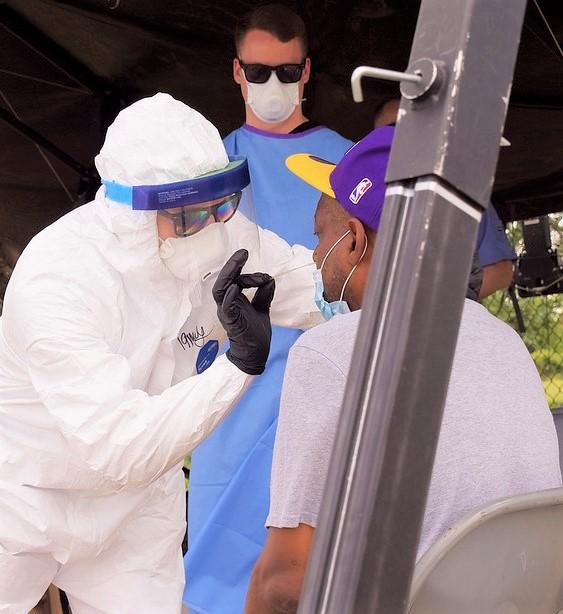 Patient ZIP code explained 79% of the overall variance in positive coronavirus test results. After adjusting for ZIP code, black patients were 1.9 times more likely than whites to require hospitalization, while those living in poverty were 3.8 times more likely.

Poor patients had a 3.6 times higher odds of requiring intensive care, whereas black patients were not at increased risk. Black and poor patients were not more likely than their peers to require mechanical ventilation; rather, respiratory distress was tied to a history of smoking and high body mass index (BMI).

Twenty of 369 patients (5.4%) died of their infections (17.2% of the 116 who were hospitalized). Increased likelihood of death was associated with shortness of breath at admission, high BMI, and age older than 60 but was not tied to race or socioeconomic status.

The authors said that the findings suggest that the worse outcomes and higher likelihood of dying from COVID-19 linked to black race resulted from a disproportionately high number of infections in the black population rather than lower survival rates after hospitalization. One reason for the relatively high number of infections in blacks, the researchers noted, could be attributed to less ability to practice physical distancing due to crowded housing and fewer work-from-home options.

The study findings are "potentially encouraging" because they suggest no inherent racial vulnerability to adverse coronavirus outcomes, the authors wrote. "Rather, the burden of this illness among African American individuals may be mitigated by reducing the rate of infection using a combination of established and novel public health methods," they said. "Racial disparities associated with COVID-19 should not be used to propagate myths related to racial biology."

Another study, which was published today in the same journal but reached different conclusions, was an analysis of data from 5,902 COVID-19 patients at a medical center in the Bronx, New York City, from Mar 14 to Apr 15.

About a third of Hispanic patients (34.3%) had more than two underlying medical conditions, as did 39.5% of black patients, versus 28.9% of white patients. A total of 1,942 patients (32.9%) had diabetes, while 2,641 (44.7%) had high blood pressure. Underlying diseases predisposing patients to death included morbid obesity (BMI > 35 kg/m2), cardiovascular disease, diabetes, dementia, and kidney disease.

The authors noted that black and Hispanic COVID-19 patients had similar outcomes as those of their white peers. "These findings may provide some reassurance that access to the services available in comprehensive health care environments may attenuate, if not eliminate, racial/ethnic differentials in COVID-19 mortality rates" they wrote.

In a commentary in the same journal, Rohan Khazanchi and Jasmine Marcelin, MD, of the University of Nebraska and Charlesnika Evans, PhD, MPH, of Northwestern University, argue that racism rather than race is behind COVID-19 racial health inequities.

"The elevated incidence of COVID-19 among Black and Hispanic communities, largely attributable to social and structural vulnerabilities, seems to drive the differences in mortality among Black, Hispanic, and White populations," they wrote. "In short, rather than validating long-debunked hypotheses about intrinsic biological susceptibilities among non-White racial groups, the evidence to date reaffirms that structural racism is a critical driving force behind COVID-19 disparities."

Khazanchi and colleagues called for interventions to address the interactions of clinical and structural risk conditions, including the spillover effects on the mental, physical, and financial health of blacks and Hispanics. "Clinicians, health systems, and policy makers alike must grapple with the fundamental inequities that lie upstream of disparate COVID-19 outcomes to make tangible progress toward health justice," they said.

In the third study, published yesterday in Pediatrics, researchers at Children's National Hospital in Washington, DC, analyzed COVID-19 data from 1,000 patients referred to a pediatric drive-through and walk-up testing site from Mar 21 to Apr 28.

After accounting for age, sex, and family income, minority children were 2.3 times more likely than white children to have a coronavirus infection. The difference increased over time in Hispanic patients but not in other racial groups.

Black children and those of other racial groups were also more likely than white children to report known coronavirus exposures (34.9% of blacks and 19.8% of other races, vs 11.3% of whites). And children from low-income households (29.3% in quartile 2) had higher rates of exposure to the virus than those from families in the highest income quartile (12.3%).

The fourth study, detailed in a research letter published yesterday in JAMA Network Open, involved analysis of data from 30,925 patients who underwent COVID-19 testing in the University of Washington Medicine system in Seattle from Feb 29 to May 31.

Of the 30,925 patients, 1,869 (6%) were non-English speakers, who were less likely to have completed coronavirus testing than native English-speakers (4.7% vs 5.6%), although the proportion differed by language group.

Non-English speakers tested positive at 4.6 times the rate of English speakers (18.6% vs 4.0%), and this disparity persisted across multiple languages and in the three largest non–English-speaking groups (Amharic, Spanish, and Vietnamese).

The researchers noted that patients living in neighborhoods in which community-based testing strategies had been instituted were more likely than others to get tested. The health system had used mobile clinics and drive-up testing to overcome barriers to testing, which they recommend for areas with high infection rates and limited testing access.

"Until we routinely examine quality of care outcomes by granular demographic measures, such as language or country of origin, disparities in care for immigrants can continue to remain hidden," the authors said.