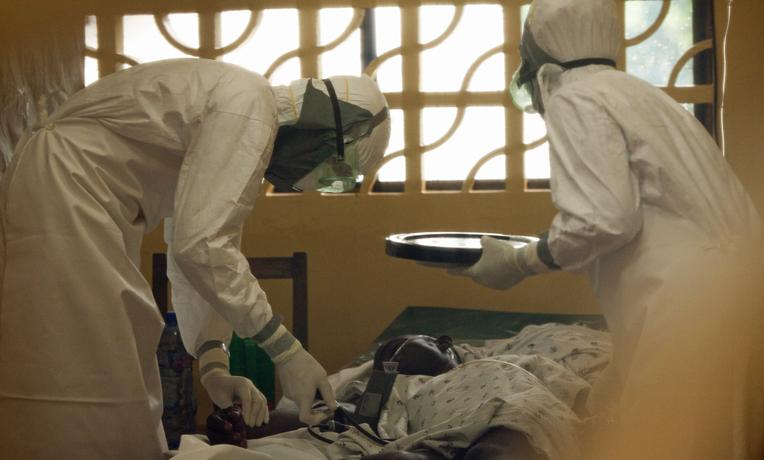 In West Africa's quickly evolving Ebola virus disease (EVD) outbreak, the illness continues to exact a heavy toll on healthcare providers and disrupt aid work, with reports of more cases and deaths and news that two top doctors in Sierra Leone and Liberia have died from their infections, according to official sources and media reports.

The outbreak in West Africa, the world's biggest and deadliest, has been an enormous challenge for affected countries and threatens other African nations

Health officials outside Africa have said the disease threat to other regions of the world is low, because EVD is spread only by exposure to the blood and body fluids of infected patients, and infected people aren't contagious until they show symptoms. However, authorities in nations such as the United States and England have warned healthcare providers that they should be prepared to see isolated cases in travelers.

WHO: Nigeria case is significant development

The World Health Organization (WHO) said in its latest update today that 122 new infections and 57 more deaths were reported in Liberia, Sierra Leone, Guinea, and Nigeria between Jul 24 and 27. The new cases raise the outbreak's overall total to 1,323 cases, 729 of them fatal. The largest number of new reports was from Liberia, which had 80 new cases and 27 deaths.

Sierra Leone, the country with the highest case count so far, reported 8 new cases and 9 more fatalities from EVD. Guinea added 33 more cases and 20 deaths to its total.

Today's update includes the first case in Nigeria, involving a government official from Liberia who flew through two other African countries before landing in Lagos, where his infection was detected. The man died. "Though only one probable case has been detected so far in Nigeria, Ebola virus infection in this country represents a significant development in the course of the outbreak," the WHO said.

The man's samples were to be brought to the Pasteur Institute in Senegal for confirmatory testing, but the WHO said courier companies have refused to transport the shipment.

Nigerian health officials told the WHO that the patient arrived in Lagos on Jul 20 after making stops in Lome, Togo, and Accra, Ghana.

So far Nigerian health officials have identified 59 contacts of the man: 15 from the airport staff and 44 from the hospital. Media reports said the man vomited and had diarrhea while on the plane. The WHO said national authorities in Nigeria, Togo, and Ghana continue to work with it and other partners on contact tracing and preparing response plans.

Sierra Leone's health ministry announced yesterday that its only virologist, Dr Shiekh Umarr Kahn, died from EVD at a treatment center in Kailahun. In a statement on its Facebook page, it said Khan's body will be sent to a Lassa-fever mortuary in Kenema, with plans for an appropriate burial on Jul 31.

Kahn headed an Ebola center in Kenema and was considered a national hero after treating more than 100 people with the disease, Indo-Asian News Service (IANS) reported today.

In a related development, Samuel Brisbane, MD, chief medical doctor at Liberia's leading medical center, who has been one of the country's leaders in its battle against EVD, died from the infection, the government announced on Jul 27, according to a report the following day from the Associated Press (AP). The report said Brisbane is the first Liberian doctor to die from EVD.

Since the outbreak began in March in Guinea, health workers have been hit hard by the disease.

Two US-based relief organizations announced yesterday that they were evacuating all nonessential personnel from Liberia because of the surge of EVD cases in the region. In a statement yesterday, SIM, based in Charlotte, N.C., said it and Samaritan's Purse were taking the step as a precaution and were in the process of setting up the evacuation details.

SIM said no EVD symptoms are present in any of the evacuees, who are being monitored based on protocols recommended by the US Centers for Disease Control and Prevention (CDC) and other global health groups.

Two medical missionaries from the relief groups recently contracted EVD infections during joint operations in Monrovia, Liberia's capital. They are Kent Brantly, MD, medical director for the Samaritan's Purse care center, and Nancy Writebol, who has been working as a hygienist decontaminating medical staff entering and leaving a hospital isolation ward.

In a related development, the Peace Corps announced today that it is temporarily removing its volunteers from Liberia, Sierra Leone, and Guinea, due to the increasing spread of EVD. In a statement it said it will closely monitor developments with experts from the CDC and the US State Department. Currently the agency has 340 volunteers working in the three countries.

"All Peace Corps programs have emergency action plans specific to that country in place, and staff and volunteers are trained and prepared to respond in situations like this one," the group said.

Updates on infections in Americans

In a statement today, SIM said Brantly and Writebol are both in stable condition and are receiving around-the-clock medical care. Samaritan's Purse said in a statement that both have shown slight improvement over the past 24 hours, but remain in serious condition.

Ken Isaacs, vice president of Samaritan's Purse, told CNN today that Brantly and Writebol may have been exposed to the virus in a scrub-down area and that the group believes a local staff member, who has since died, was infected with EVD and came to work sick.

Samaritan's Purse said medical personnel have been treating patients with a method called barrier nursing, which eliminates skin-to-skin contact through thick layered protective suits that are decontaminated each time a person leaves the isolation unit. The Christian  group urged people to continue to pray for the two relief workers, caregivers working in the area, and other patients infected with the virus.

Brantly and Writebol are the first Americans to be infected in the outbreak, but media reports have said the Liberian government official who recently died in Nigeria, sparking concerns about the virus' spread though air travel, has ties to the United States. The man is Patrick Sawyer, who did economic development work for Liberia's government and had been living in Liberia for several years, but had a wife and children in Coon Rapids, Minn., a suburb of the Twin Cities, according to a Jul 28 Minnesota Public Radio (MPR) report. He was scheduled to visit Minnesota in August.

The man's last visit to Minnesota was last summer, according to a report today from the Minneapolis Star Tribune. The man's wife, Decontee Sawyer, said her husband had been caring for his sick sister, who was thought to have malaria, but tests conducted after her death confirmed EVD.