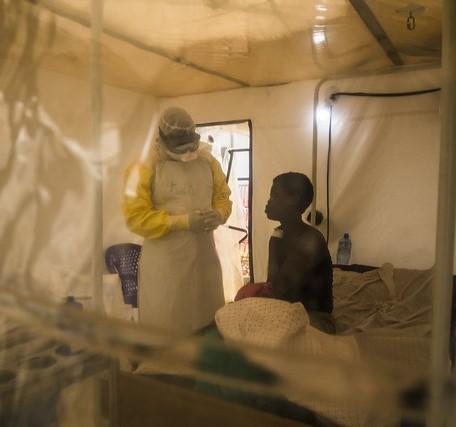 The World Health Organization (WHO) said today the third case of Ebola identified in South Kivu province was in a patient who contracted the virus at a health center where other Ebola patients had been treated.

The details on the nosocomial transmission emerged in the WHO's latest situation report on the ongoing Ebola outbreak in the Democratic Republic of the Congo (DRC). In the past week, two more DRC regions far from outbreak hot spots have reported cases: South Kivu province and Pinga health zone, which is in North Kivu province.

The WHO is still investigating how the case-patient in Pinga contracted the virus, but investigations have shown a mother and child in Mwenga, South Kivu, became infected after contact with a patient from Beni, the city most hard hit by the outbreak this summer. The two towns are about 473 miles apart, and South Kivu province shares a border with Rwanda and Burundi.

"The third confirmed case was a co-patient in a community health facility where the first cases initially sought care," WHO said. The WHO said 11% of all cases in this outbreak have come from nosocomial transmission, and 5% have involved healthcare workers.

In the past 3 weeks, officials confirmed 215 cases in North Kivu, Ituri, and South Kivu provinces, with most coming from Beni (33%) and Mandima (20%). Fifty-seven Ebola cases were confirmed in the past week, down slightly from the summer's average of around 80 cases per week.

Today, however, the WHO's Ebola dashboard shows 18 newly confirmed cases, which raises the outbreak total to 2,927, including 1,953 deaths. Officials are still investigating 347 suspected cases.

Women represent 58% of the cases, the WHO said, with children representing 28%.

The Rwandan newspaper The New Times reported that the country is in talks to acquire 100,000 doses of Johnson & Johnson's Ebola vaccine in an effort to vaccinate traders who work along the Rwandan-DRC border as a preventive step.

Janssen Pharmaceutical Companies of Johnson & Johnson would be donating the investigational vaccine regimen to Rwanda as part of a proposed clinical study.

The health ministry offered no further details on when authorities would start the vaccination campaign, but officials did tell the BBC that they would first focus on the 60,000 traders who cross in and out of the DRC most frequently, the story said.

In other news, the European Union (EU) announced it would help Burundi secure funding for Ebla preparedness measures, including surveillance efforts. The EU will give the country €465,000 ($515,430), allocated through the WHO.

Finally, the Norwegian Refugee Council yesterday published a new report on the outbreak, and it said convincing local communities within the DRC of the severity of the outbreak is the most important step needed to end the crisis.

"There is resistance from the communities to work with the Ebola response teams," said Nema Dounamou, WHO team leader in Beni. "The more time that passes, the more used to the threat people become. We are already struggling with people not realising the severity of the epidemic."