US homecoming for Ebola-stricken workers as outbreak spreads 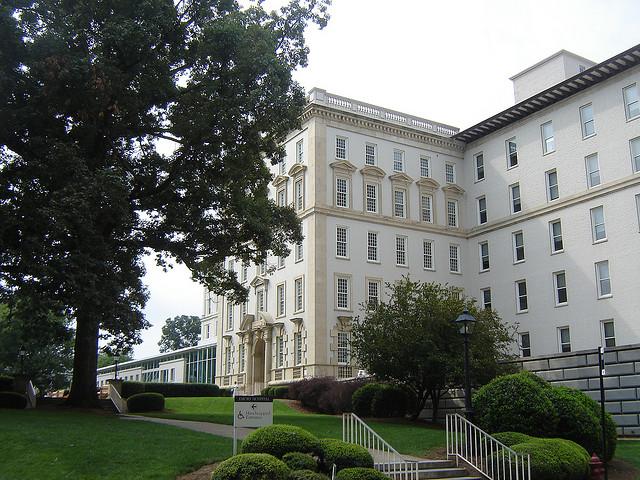 Emory University Hospital in Atlanta, where a US physician is in isolation with Ebola., Matt Phillips / Flickr

Editor's Note: This story was updated on Feb 2, 2018, to remove mention of an EVD case in Morocco. That country has never had a confirmed case, contrary to media reports in 2014. Many thanks to Tahar Bajjou, PharmD, PhD, and colleagues at the Mohammed V Military Teaching Hospital and Mohammed V University in Rabat, Morocco, for pointing out the error.

A US doctor infected with Ebola virus disease (EVD) in Liberia is improving, having arrived in Atlanta on Aug 2, where he is receiving care in an isolation unit at Emory University Hospital, according to media reports. The hospital is slated to receive the second EVD-infected American aid worker tomorrow.

Among other developments in the quickly evolving EVD outbreak, Nigerian authorities said a doctor who treated the country's first imported case is sick with the disease, with three other contacts showing symptoms of the disease.

In addition, Mount Sinai Hospital in New York City is awaiting tests on a possible EVD case there, but officials say it likely does not involve Ebola.

WHO committee to meet

National and global health groups have said the risk of disease spread outside of Africa is low, due to the dynamics of the disease and that many countries have hospital infectious disease protocols that, when carefully followed, could easily contain the virus.

The virus spreads only through contact with body fluids of infected patients, and people who are sick with the virus shed the virus only when they have symptoms, unlike a disease such as influenza, which can transmit even before people know they are ill.

The virus, however, poses a considerable threat to other African nations, especially in areas that don't have experience battling EVD outbreaks and have weak healthcare infrastructure. On Aug 6 and 7 a World Health Organization (WHO) emergency committee will meet to consider if the developments constitute a public health emergency of international concern (PHEIC), a declaration that would trigger temporary measures to curb the spread of the disease.

US return for infected missionaries

Kent Brantly, MD, a missionary for Samaritan's Purse who contracted EVD while working at a treatment center in Monrovia, Liberia, was airlifted out of the country and arrived at Dobbins Air Force Base in Atlanta on Aug 2, according to a statement today from the aid group. He was transported to an isolation unit at Emory University Hospital that has been set up in collaboration with the US Centers for Disease Control and Prevention (CDC) to treat patients with certain serious infectious diseases.

Samaritan's Purse said Brantly and his colleague Nancy Writebol, the other infected American, both received a dose of experimental serum while they were being treated for EVD in Liberia. It said Brantly also received a unit of blood from a 14-year-old boy who survived an Ebola infection, after the doctor treated him.

Meanwhile, Writebol will arrive in Atlanta tomorrow and will also receive care at Emory's isolation unit, according to a statement today from SIM, a Christian missionary group based in North Carolina.

The group said a plane with a unique containment unit, the same one that flew Brantly to Atlanta, will fly Writebol to Dobbins Air Force Base, after which she will be transported to Emory. It said her husband will travel back to the United States separately in a few days.

SIM also said eight of its missionaries from Liberia—two adults and six children—returned to the United States yesterday and will be temporarily housed at its campus in Charlotte. The group said it is following strict health protocols established by the CDC and WHO. All the missionaries were cleared by disease experts to fly on commercial flights, and all received medical checkups upon their return to the United States. None are sick or showing symptoms of infection.

Though the group has removed nonessential personnel from Liberia, SIM said it sent another American missionary doctor to help at a different Ebola treatment center in Liberia.

The Mount Sinai case involves a man experiencing a high fever and gastrointestinal symptoms, Time magazine reported today. He had visited West Africa but has no known risk factors for EVD.

"After consultation with CDC and Mount Sinai, the Health Department has concluded that the patient is unlikely to have Ebola," the New City Department of Health said on its Web site. "Specimens are being tested for common causes of illness and to definitively exclude Ebola."

Hospital representatives said at a press conference today that they hope to have a specific diagnosis in 48 hours, according to Time.

The EVD developments prompted the CDC to send another Health Alert Network (HAN) advisory to health providers, which contains guidelines for evaluating US patients with suspected EVD infections. So far no cases have been reported in the United States, the CDC said in its Aug 1 HAN.

US hospitals can safely manage a patient who has EVD by following recommended isolation and infection control procedures, the CDC said. The new HAN notice spells out how to identify patients with suspected EVD infections, which specimens to obtain, how to submit samples for testing, and hospital infection control guidelines that health providers should follow.

Clinical criteria include a fever of greater than 101.5°F and risk factors within the past 3 weeks before symptoms onset, such as contact with blood or body fluids of a suspected or confirmed EVD case-patient, residence or travel to an area in which EVD is transmitting, or direct handling of bats, rodents, or primates from disease-endemic areas.

The CDC urged providers to test for malaria in the initial work-up, because the disease is a common cause of fever in patients to the affected countries in West Africa.

The agency recommends EVD testing for all people who have fever within 21 days of high-risk exposure, which includes percutaneous or mucous membrane exposure or direct skin contact with body fluids—without appropriate personal protective equipment (PPE)—of a person with confirmed or suspected EVD.

As another resource for health providers, the CDC will host a Clinician Outreach and Communication Activity (COCA) conference call tomorrow (Aug 5) on what US hospitals need to know to prepare for EVD. The 1-hour call is at 2:00 pm (Eastern time), and presenters include Barbara Knust, DVM, MPH, an epidemiologist with the division of high consequence pathogens and pathology at the CDC's National Center for Emerging and Zoonotic Infectious Diseases (NCEZID) and David Kuhar, MD, a medical officer with the division of healthcare quality promotion at the CDC's NCEZID.

In other developments, the scope of the outbreak continued to expand, with an announcement by Nigerian health officials that a doctor who treated its first travel-linked case is now sick with the disease.

Nigeria detected its first case a week ago, in a Liberian government worker with US ties who died from EVD after he arrived in Lagos. The WHO called that Nigerian case a significant development in West Africa's EVD outbreak.

Nigeria's health minister Onyebuchi Chukwu said EVD has been detected in one of the doctors who treated the country's first patient, Agence France-Presse (AFP) reported today. He said 70 people who were contacts of the Liberian patient are being monitored, and that of eight people who are in quarantine, three show symptoms of the disease.

Meanwhile, the death of a traveler from Gambia who died after arrival at London's Gatwick Airport prompted a health scare on Aug 2, but tests on samples from the woman were negative yesterday for EVD, the BBC reported yesterday.

The woman, thought to be in her early 70s, arrived on a Gambia Bird flight on the morning of Aug 2, collapsed at the airport, and was pronounced dead at the hospital, the BBC said. A Department of Health spokeswoman said the passenger's symptoms did not resemble EVD, but tests were conducted, because she had traveled from West Africa.

Health officials said the case was considered unlikely, but tests were done as a precaution, according to the report.

The WHO said today that 163 new EVD cases, along with 61 more deaths, were reported from four West African nations on Jul 31 and Aug 1. Three of the cases were reported in Nigeria, two probable infections and a suspected case. The probable cases are in a healthcare worker and a Nigerian who had traveled to Guinea, and the suspected case involves a nurse.

The new cases boost West Africa's overall outbreak totals to 1,603 illnesses and 887 deaths. Sierra Leone has the most cases, with 646 so far, but Guinea, where the outbreak began, has the highest number of deaths, at 358, compared with 255 in Liberia.

Officials in Ghana, Nigeria, and Togo are working closely with the WHO to identify contacts of a Liberian patient who died from EVD after traveling to Liberia and the new probable Nigerian case-patient who got sick after traveling to Guinea. The WHO also said it is working with the three countries on their response plans, in response to the travel-related spread of the disease.

The surge of new cases in West Africa and spread of the disease to new areas prompted the European Centre for Disease Prevention and Control (ECDC) to look at the risk again, its third evaluation since the outbreak began in March.

It said that overall the risk of infection is still low if basic precautions are followed. The ECDC emphasized that EVD required direct contact with blood, secretions, organs, or other body fluids of dead or living infected people or animals. "Unlike influenza, the virus is not transmitted by air or droplets."

Though people infected with EVD may arrived in the EU from outbreak areas, the risk of secondary transmission to direct contacts is still considered very low if infection-prevention measures are followed, the ECDC said. It added that prevention measures can include information for returning travelers and health providers.

For tourists, visitors, or residents of countries affected by the outbreak, the risk of infection is still very low if basic precautions are followed, the agency said. Steps include avoiding contact with symptomatic patients or dead bodies and their bodily fluids and avoiding unprotected sexual contact with a patient who has recently recovered from the disease.

The ECDC emphasized that the highest risk for EU residents and visitors is within the healthcare systems of affected countries.