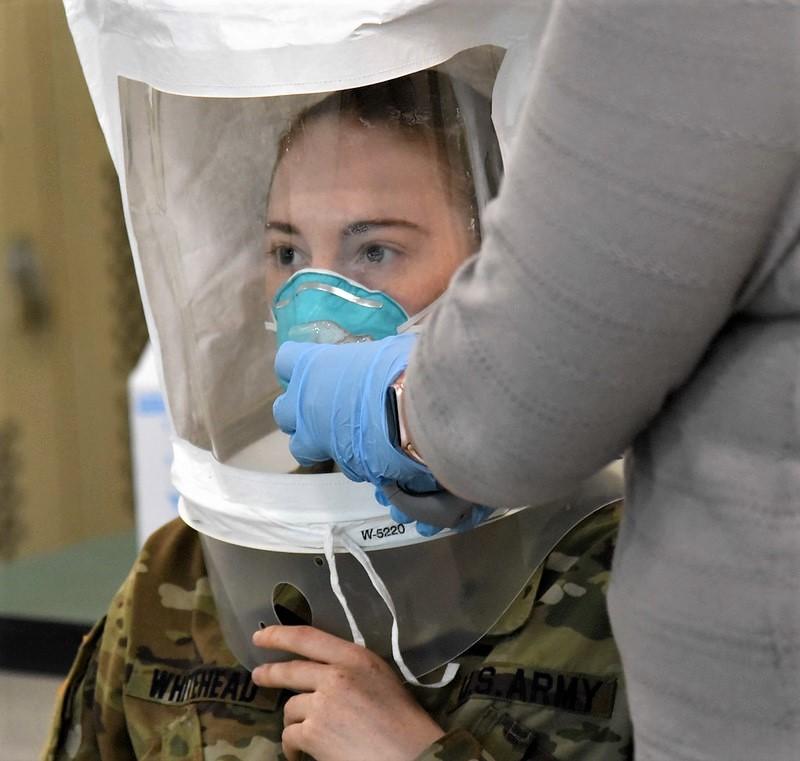 A group of US experts in medicine, public health, and industrial health, penned a letter to White House officials, including Anthony Fauci, MD, and the director of the Centers for Disease Control and Prevention (CDC) asking them to fully address the inhalation, or airborne, nature of COVID-19 transmission and provide frontline workers with appropriate respirators and ventilation strategies to cut the infection risk.

The group said the United States must follow Germany, Austria, and France—countries that recently mandated respiratory protection equivalent to N95 filtering facepiece respirators (FFRs) and higher-quality filtration systems for all workers in public.

"People are reluctant to use the word airborne because of what it conjures up," said Robert Schooley, MD, of the University of San Diego today in a virtual press conference on the letter.

Schooley signed the letter, along with other experts in the field, including Donald Milton, MD, DrPH, of the University of Maryland in College Park, and the University of Minnesota's Michael Osterholm, PhD, MPH. Osterholm directs the Center for Infectious Disease Research and Policy (CIDRAP), which publishes CIDRAP News.

But despite the scary image of an airborne virus, accepting the reality that COVID-19 can be transmitted easily through the air via small aerosols is necessary if the United States wants to control the pandemic, the group said.

"Government officials must fully recognize inhalation exposure as a major way COVID-19 spreads and take immediate action to control and limit this exposure," said Milton during the press conference. "For months the scientific evidence has been clear: Aerosol transmissions are a major way this virus spreads."

Milton cited choir practices, restaurant exposures, and even 3- to 5-minute conversations between masked people as examples of documented airborne transmission. He also said inhalation transmission may partly explain the inequity of the COVID-19 pandemic in the United States.

"People of color, many of whom work on the front lines in essential jobs, have suffered—and continue to suffer—the greatest impacts of the COVID-19 pandemic," the authors of the letter wrote.

But despite the overwhelming evidence that COVID-19 is spread through small aerosols, the CDC has upheld an early definition of COVID-19 exposure, one that emphasizes large droplets and contaminated surfaces.

Lisa Brosseau, ScD, CIH, a nationally known expert on respiratory protection and infectious diseases, signed the letter, and said she hoped that change in the White House would lead to a better understanding of the science of transmission. But still she said the CDC is "intransigent" when it comes to reporting inhalation exposure. Brosseau is a research consultant for CIDRAP.

"There are a bunch of gatekeepers," Brosseau told CIDRAP News. "Maybe it's partly science and some pressure coming from parties we don't know about." She said hospital groups may be reluctant to accept the inhalation route of transmission.

Hospitals, Brosseau said, "just hate the idea of spending money on personal protective equipment, and they point to badly done clinical studies that say a surgical mask is just as effective. The focus on healthcare is always on the patients, not on workers."

Biden says all Americans vaccinated by end of July

The recommendation for wider use of respirators comes as President Joe Biden addressed pandemic during a town hall meeting last night in Milwaukee. Biden said every adult American will be able to be vaccinated by the end of July, and he hoped the country will be "in a very different circumstance" by Christmas.

The CDC COVID Data Tracker shows 72,423,125 COVID-19 vaccine doses have been delivered in the United States, and 56,281,827 doses have been administered, which means roughly 12% of the US population has had at least one dose in a two-dose series of either the Moderna or Pfizer mRNA vaccines.

Jeff Zients, the White House COVID-19 czar, said an average of 1.7 million Americans were being vaccinated each day, up from approximately 800,000 per day on Jan 20, when Biden took office.

Today the White House also announced it would pledge a $200 million "down payment" to the CDC to triple the number of positive virus samples that labs sequenced for genomic variants. This would raise the number of sequenced samples from 7,000 to around 25,000 each week. Politico reported the CDC is in talks with 13 public health labs to conduct the sequencing.

The move comes as variants, including the B117 first identified in the United Kingdom, become more prevalent across the United States.

Today in Morbidity and Mortality Weekly Report, the CDC offered details on the first eight cases of B117 in Minnesota. Though none of the people traveled to the United Kingdom, three of the eight did report recent travel to California, while another reported a trip to the Dominican Republic, and two others had recently been in West Africa.

The travel history shows the inherent risk of traveling at this stage of the pandemic, the CDC said.

Finally today, a working group for the CDC's Advisory Committee on Immunization Practices (ACIP) is weighing recommendations for extending the interval between the first and second doses of COVID-19 vaccines, according to Bloomberg.

The interval would allow more people to get a first dose of the vaccine.