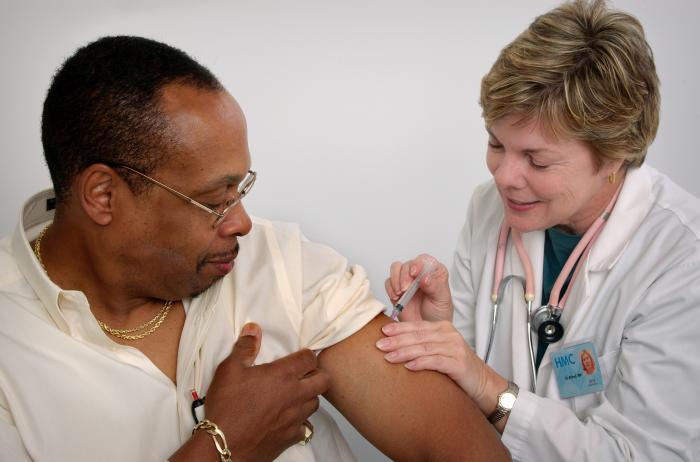 Sanofi Pasteur's high-dose vaccine for seniors was approved by the FDA in 2009., James Gathany / CDC

A 2-year randomized trial involving close to 32,000 volunteers at more than 100 sites has yielded evidence that a high-dose (HD) influenza vaccine intended for seniors offers significantly more protection in that age-group than the standard-dose (SD) vaccine, according to a New England Journal of Medicine report published today.

The researchers concluded that the relative efficacy of the HD vaccine was 24.2% higher than that of the SD vaccine. About 1.4% of the volunteers in the HD group had a confirmed flu case, compared with 1.9% of those in the SD group.

The results, the authors say, suggest that flu cases in vaccinated seniors would drop by about 25% if they all received the HD vaccine instead of an SD vaccine. They also found that the vaccine had a good safety profile.

Because the study did not include an unvaccinated group for comparison, the authors could not calculate how much either vaccine lowered the volunteers' overall risk of contracting flu (absolute efficacy).

(Because flu vaccination is recommended for all seniors, doing a trial with an unvaccinated group would be considered unethical.)

The HD vaccine, Fluzone High-Dose, made by Sanofi Pasteur, contains four times as much antigen (active ingredient) as standard vaccines contain—60 milligrams (mg) for each flu strain targeted, instead of 15 mg. The aim is to generate a stronger immune response in elderly people, whose immune systems are weaker than those of younger people.

When the US Food and Drug Administration (FDA) approved the vaccine in 2009, the step was based largely on evidence that it increased the immune response in older people; the actual protection afforded by the vaccine had not yet been studied. Accordingly, the FDA stipulated that Sanofi would have to conduct further studies to assess the vaccine's benefits.

The study, sponsored by Sanofi, was conducted during the 2011-12 and 2012-13 flu seasons at 126 sites in the United States and Canada. The investigators recruited 31,989 adults 65 and older who had no moderate or severe acute illnesses. Half of them were randomly assigned to receive the HD vaccine and half the SD product.

The participants were told to report any respiratory symptoms during flu season, and they were contacted at least once a week during that time. The researchers defined a flu-like illness as a respiratory illness with sore throat, cough, sputum production, wheezing, or difficulty breathing, along with any of the following: a temperature above 37.2°C (99°F), chills, fatigue, headaches, or myalgia. Staff members were instructed to collect nasopharyngeal samples within 5 days after onset of illness for testing.

Low flu incidence in both groups

This result met a benchmark set in advance by the FDA, the report says. The agency said the HD vaccine would be considered better than the standard one if the lower limit of the 95% CI exceeded 9.1%, because this provided confidence that the risk of confirmed flu was at least 10% higher with the SD vaccine.

The investigators also found that immune responses as measured by hemagglutination inhibition titers were significantly higher in those who received the HD vaccine.

The senior author and coordinating investigator of the study is Keipp Talbott, MD, of Vanderbilt University. "Until this trial came out we didn't know if it [the HD vaccine] was going to be clinically better or not and now we know it is better," he said in a Vanderbilt University Medical Center press release.

"The overall efficacy of 24.2% against the primary end point [confirmed flu] indicates that about one quarter of all breakthrough influenza illnesses could be prevented" if the HD vaccine were used instead of the standard one, the report states.

Another flu vaccine expert, however, questioned that efficacy estimate, saying it's based on faulty data.

Lisa Jackson, MD, MPH, an experienced flu vaccine researcher who was not involved in the study, called it "a high-quality and significant study," adding, "It is one of the few trials of persons 65+ that used lab-confirmed virus detection as the endpoint."

Jackson, who is a senior investigator with the Group Health Research Institute in Seattle, said the only other similar study she could recall that used lab-confirmed detection of flu in seniors was one that compared vaccines with and without adjuvants.

"Like the adjuvanted vaccine trial, we can see that the vaccine of interest performed better than standard vaccine, but we don't know what level of efficacy was exhibited by the standard vaccine as there was no placebo arm," she commented.

"Given that there is now good data on the high-dose vaccine indicating that, basically, it does something, I think that warrants preferential use in older adults," she said. She also suggested that its use should be considered in other groups, such as younger adults, HIV patients, and immunocompromised individuals.

However, Jackson voiced a reservation about the authors' estimate that standard vaccines have 50% absolute efficacy in seniors and that the HD vaccine thus might have 62% efficacy. She said the 50% estimate for the standard vaccine is not based on solid evidence, because both studies the authors cited had flaws.

She also remarked that the low flu prevalence reported in the study (less than 2%) "is consistent with other studies and seems to be discrepant with the reportedly high rate of significant outcomes related to flu in this population."