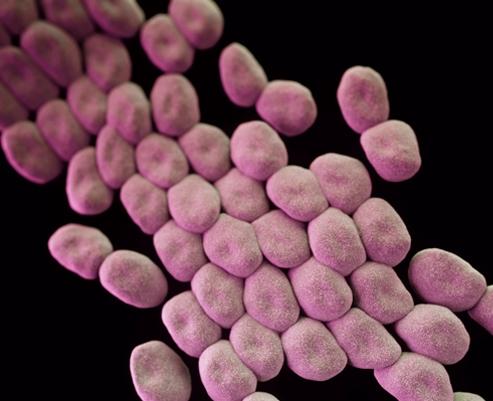 Acinetobacter is one of the species showing increased drug resistance., CDC

New surveillance data from the European Union (EU) shows that worrisome trends in antimicrobial resistance are continuing on the continent.

The most troubling finding reported by the European Centre for Disease Prevention and Control (ECDC) is that Klebsiella pneumoniae, a common cause of urinary tract, respiratory tract, and bloodstream infections, is showing increasing resistance to first-line therapeutic drugs. But the report found signs of increasing resistance in Escherichia coli and Acinetobacter species as well.

According to the latest data collected by the European Antimicrobial Resistance Surveillance Network (EARS-Net), more than a third of the K pneumoniae isolates reported were resistant to at least one of the three antibiotic groups under surveillance—fluoroquinolones, third-generation cephalosporins, and aminoglycosides—with lower resistance rates reported in northern countries and higher rates in southern and southeastern European countries.

Even more concerning, the population-weighted mean percentage of K pneumoniae isolates resistant to all three antibiotic classes rose from 17.7% in 2012 to 18.6% in 2015 in all EU-member states (plus Iceland and Norway). In addition, EU-wide K pneumoniae resistance to carbapenem antibiotics—one of the last lines of defense for treatment for multidrug-resistant K pneumoniae infections—rose from 6.2% in 2012 to 8.1% in 2015.

"Very few therapeutic options are left for patients infected with multidrug-resistant K. pneumoniae with additional resistance to carbapenems, and are often limited to combination therapy and to older antibiotics such as colistin, an antibiotic from the polymyxin group," the EARS-Net summary report states. Yet the report notes that countries with high percentages of carbapenem resistance have also reported combined carbapenem and colistin resistance, an indication of further loss of treatment options.

The EARS-Net data also suggest that public health officials need to keep an eye on rising resistance in E coli and Acinetobacter species as well. The data show that more than half of the E coli isolates reported in 2015 were resistant to at least one antibiotic group under surveillance—aminopenicillins, fluoroquinolones, third-generation cephalosporins, aminoglycosides, and carbapenems. In E coli isolates, combined resistance to third-generation cephalosporins, fluoroquinolones, and aminoglycosides rose from 4.9% in 2012 to 5.3% in 2015.

Acinetobacter showed varying levels of resistance across the continent, but almost half of the reported isolates showed combined resistance to fluoroquinolones, aminoglycosides, and carbapenems. That finding indicates limited treatment for patients with Acinetobacter species, which mainly cause healthcare-associated bloodstream and pneumonia infections.

Encouraging signs on MRSA, antibiotic use

The data, however, did show some positive news on methicillin-resistant Staphylococcus aureus (MRSA), which commonly causes healthcare-associated infections worldwide. According to the report, the EU-wide percentage of MRSA among invasive S aureus isolates dropped from 18.8% in 2012 to 16.8% in 2015. But 8 of 30 countries reported MRSA percentages above 25%.

ECDC acting director Andrea Ammon, MD, MPH, said that while she is deeply concerned about increasing resistance rates, the data on antibiotic consumption suggests some progress is being made in the fight against antimicrobial resistance.

Another report released today, by the World Health Organization (WHO), found similar concerns about rising resistance in non-EU countries of the European region.

The second Central Asian and Eastern European Surveillance of Antimicrobial Resistance (CAESAR) report shows that high levels of carbapenem resistance in K Pneumonia and high levels of multidrug resistance in Acinetobacter are present in clinical settings in several of the seven countries that submitted data for the report—Belarus, Bosnia and Herzegovina, Russia, Serbia, Switzerland, the former Yugoslav Republic of Macedonia, and Turkey—as well as Kosovo.

"What the report indicates is concerning: our patients are exposed to resistant bacteria in hospitals due to overuse and misuse of antibiotics and poor infection prevention and control," Zsuzsanna Jakab, PhD, WHO Regional director for Europe, said in a WHO press release.