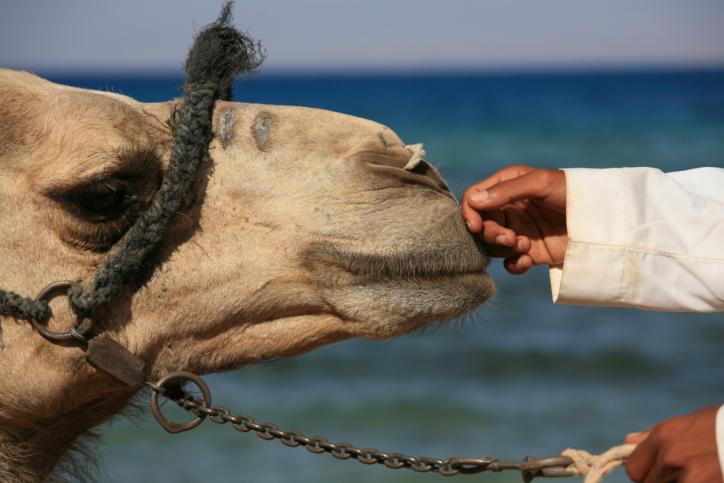 Researchers today reported that dromedary camels on a farm in Qatar were infected with a strain of Middle East respiratory syndrome coronavirus (MERS-CoV) nearly identical to that found in two people associated with the farm. The findings point to an outbreak that involved both camels and humans, but they don't answer the key question of whether camels infected humans or the other way around.

Qatari health officials announced Nov 27 that the virus had been found in camels on the farm. Today's report in the Lancet Infectious Diseases spells out the science behind the announcement and says the findings mark the first definitive confirmation of the virus in camels.

The research team, involving Dutch, Qatari, and British scientists, said the nucleotide sequences of two genomic fragments from the camel and human viruses were very similar, but not identical. The similarity is close enough so that researchers couldn't tell whether the camels or the humans were infected first.

"We cannot conclude whether the people on the farm were infected by the camels or vice versa, or if a third source was responsible," the report says.

The results are the latest chapter in the quest to identify the source of the virus and how it is getting into humans. In previous studies, scientists reported MERS-CoV-like antibodies in camels in Oman, Egypt, the Canary Islands, Jordan, and Saudi Arabia, but not the virus itself.

More than a month ago, on Nov 11, Saudi Arabian officials said the virus had been detected in a camel linked to a human case in Jeddah, but they have not yet published a scientific report on the discovery.

The two human MERS cases associated with the Qatari farm were detected in October. The first case involved the farm's 61-year-old owner, who had contact with camels, sheep, pigeons, and hens at the site, the Lancet report notes. The second case, which surfaced a few days after the first, was in a 23-year-old man who worked on the farm.

Qatari authorities, with help from the World Health Organization, did an epidemiologic investigation at the farm within a week after the first case, taking nasal and rectal swabs and blood samples from all 14 camels there on Oct 17, according to the report.

Five camels tested positive by polymerase chain reaction (PCR) on three different gene segments, according to the report. In further PCR testing, which targeted the MERS-CoV spike gene, three of these camels were positive for the virus. The tested spike gene segments were sequenced and found identical in all three samples.

In further efforts, the researchers sequenced six gene fragments from one of the three camels. A phylogenetic analysis of the sequences revealed that the camel sample closely resembled the strains from two human cases linked to the farm and a human case reported at Hafr-Al Batin, Saudi Arabia, in June.

In other results, they found that all 14 camels had MERS-CoV antibodies, which suggested that the virus might have been circulating in the animals for a considerable time.

The authors say six of the camels were positive for the virus at two different PCR targets, which is an internationally recommended standard for confirmation. The sequencing results, they add, increase the level of certainty.

"Our results suggest a widespread and recent outbreak in this herd, coinciding with infection in two people," they wrote.

"Our data should not be taken as evidence for infection of people from the camels," they added. The sequencing results showed that the camel and human findings were "very similar, but distinct." Also, the camel and human samples were analyzed in separate laboratories in the Netherlands and the United Kingdom.

They said further that the sequence difference between the human and camel samples from the farm "is so small that we cannot conclude whether the people on the farm were infected by the camels or vice versa. Another possibility is that people and camels were infected from a third as yet unknown source."

"The most important unknown is the exact timing of infections, both in the infected people and in camels," the researchers said.

They added that further sequencing probably will not provide conclusive evidence as to which species was infected first, but they are working on a more detailed analysis of the outbreak, including testing of more animals and efforts to obtain complete MERS-CoV genomes.

In an accompanying commentary, Neil M. Ferguson, DPhil, and Maria D. Van Kerhove, PhD, both of Imperial College London, wrote that the close similarity between the human and camel isolates "strongly suggests cross-species transmission, but present data do not inform on the direction of that transmission."

They comment that "the slow rate of growth of the underlying epidemic, whether in camels, human beings, or other reservoir species" represents "a particular paradox." Environmental contamination is one possibility that may explain "the persistence of MERS-CoV in the absence of an explosive epidemic."

Ferguson and Van Kerkhove observe that the virus can spread from person to person, but whether it can achieve sustained transmission is still unknown.

"If self-sustained transmission is not yet underway, intensive control and risk-reduction measures targeting affected animal species and their handlers might eliminate the virus from the human population," they wrote. "Conversely, if zoonotic exposure causes only a small fraction of human infections, then even intensive veterinary control efforts would have little effect on cases in people."

Ferguson and Van Kerkhove praise Qatar for doing "an exemplary integrated outbreak investigation," adding, "The handling of the outbreak reported here is a model that we hope is more widely adopted in the future."