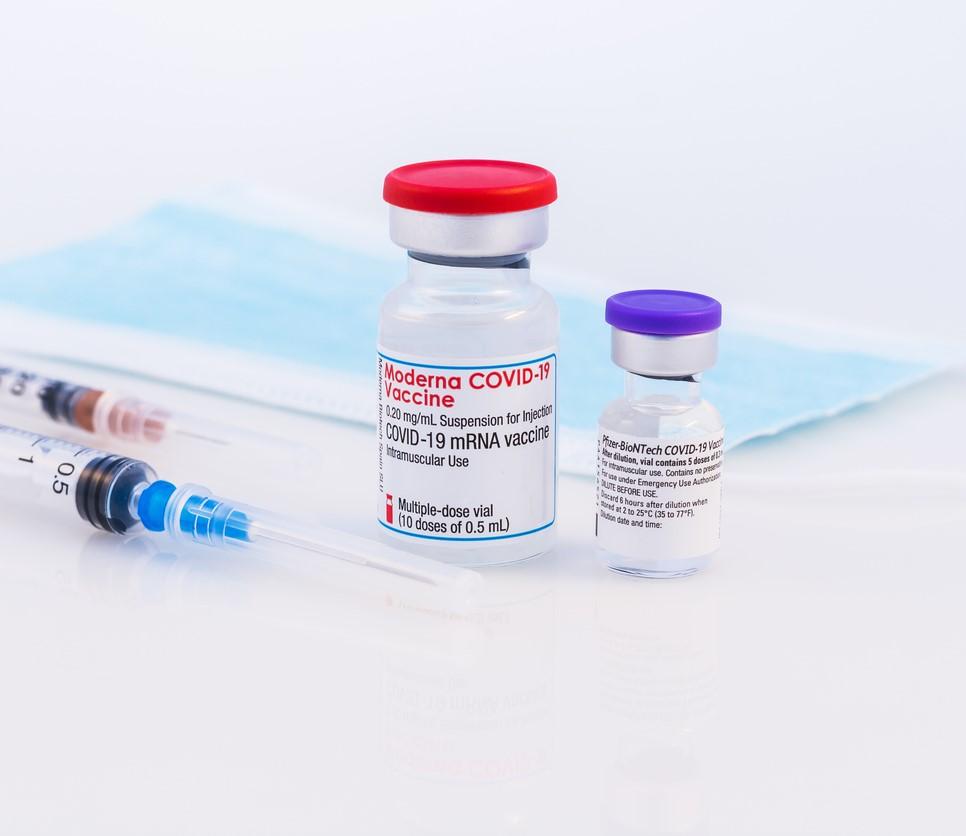 In the first head-to-head comparison of the Pfizer/BioNTech and Moderna mRNA COVID-19 vaccines, Moderna edged out its competition with a 21% lower risk of infection and a 41% lower risk of hospitalization over 24 weeks, according to a study yesterday in the New England Journal of Medicine (NEJM).

A team led by researchers from Harvard University and the US Department of Veterans Affairs (VA) analyzed the electronic medical records of veterans nationwide, almost all of whom received two doses of either the Pfizer or Moderna COVID-19 vaccine from Jan 4 to May 14, 2021. The study period was dominated by the SARS-CoV-2 Alpha (B117) variant.

"Both vaccines are incredibly effective, with only rare breakthrough cases," said study coauthor Juan Casas, MD, PhD, an epidemiologist at Brigham and Women's Hospital in Boston and a Harvard associate professor, in a VA news release. "But regardless of the predominant strain—Alpha earlier and then Delta later—Moderna was shown to be slightly more effective."

Results held up in both Alpha, Delta periods

The researchers noted that the matched population during the period of Delta dominance was, on average, younger. This group also had a higher percentage of Black participants, current smokers, and those who had received no flu vaccinations in the previous 5 years at a VA facility; and it included a lower percentage of those with underlying chronic conditions.

"The 24-week risk of COVID-19 outcomes was low after vaccination with mRNA-1273 [Moderna] or BNT162b2 [Pfizer], although risks were lower with mRNA-1273 than with BNT162b2," the study authors wrote. "This pattern was consistent across periods marked by alpha- and delta-variant predominance."

The researchers noted that although early clinical trials and then real-world observational studies found that the Pfizer and Moderna vaccines were both highly effective against symptomatic COVID-19 (95% vs 94%, respectively), no direct comparisons had been attempted.

In the VA news release, first author Barbra Dickerman, PhD, MSc, of Harvard said that both vaccines are recommended because they both are highly effective. “However, while the estimated differences in effectiveness were small on an absolute scale, they may be meaningful when considering the large population scale at which these vaccines are deployed," she said. "This information may be helpful for larger decision-making bodies."

In an accompanying editorial, Eric Rubin, MD, PhD, NEJM editor-in-chief, and Dan Longo, MD, both of Brigham and Women's Hospital, said that meeting the vaccine needs of the developing world will require the use of both mRNA vaccines as well as other types.

"Even if they are less able to protect against infection, many of the other available vaccines do a very good job of protecting against severe disease," they wrote. "Moreover, the study by Dickerman et al gives us no idea how the vaccines will compare after an additional booster dose. So the lesson we take away is not about differences—it's about similarities."