Whether or not monkeypox (MPX) should be labeled a sexually transmitted infection (STI) isn't much of a debate among STI experts.

So far, more than 95% of cases in the United States have been acquired during sexual contact among men who have sex with men (MSM). To not call it an STI is nearly equivalent to saying syphilis isn't an STI because exceptions to sexual transmission are common in some settings.

Pragmatically, MSM should be advised that certain sexual practices and lifestyles put them at very high risk of MPX. As well as its opposite: That modified sexual exposures can be nearly 100% protective.

Just yesterday, the Centers for Disease Control and Prevention (CDC) published a report documenting an intimate association between MPX and other STIs in MSM in the United States. The CDC has long advised screening patients who have newly diagnosed STIs for other STIs, and it recommends STI screening all persons evaluated for MPX, implicitly recognizing MPX as an STI.

Recently reported cases of MPX in persons other than MSM is similar to the course of HIV transmission in the early years of HIV/AIDS in industrialized countries. But the dominant sexual transmission of HIV among MSM, and its characterization as an STI in them, remains valid.

Precedents with other infections

That an infection is an STI in some settings but not others has precedents. Among MSM, most enteric infections (eg, Salmonella, Campylobacter, hepatitis A) are properly considered STIs, even though sexual transmission is uncommon in the population as a whole. 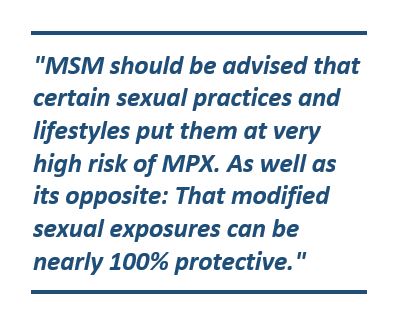 Chancroid, one of the five classical venereal diseases, is now known to be a common non-sexually transmitted skin infection in tropical climates, best documented in Papua New Guinea and other South Pacific islands. That doesn't imply that chancroid should not be considered an STI in most populations and geographic areas.

A valid approach is to ask what the epidemiology of a condition would be if sex were not involved. Some cases of tuberculosis, influenza, Zika, and Ebola are transmitted between sex partners and undoubtedly during sexual contact. But if sex didn't exist, there would be little if any change in overall incidence or prevalence, and we don't label them as STIs.

The exact opposite is true of syphilis, gonorrhea, and chlamydia—generally sexually transmitted but with well-documented exceptions. For MPX and enteric infections in MSM, eliminating sexual contact would markedly reduce—and perhaps eliminate—transmission in that population.

Part of the problem, of course, is that characterizing an infection as sexually transmitted automatically makes it stigmatizing. It's a social issue without easy or quick resolution, stemming from the problems most societies have with sex and sexuality in general.

Avoiding the truth doesn't help, but of course context, tact, and understanding are requirements in limiting stigmatizing interpretations. For example, in some circumstances it may be useful to characterize an infection as sexually transmissible rather than sexually transmitted, with the former term implying flexibility, including nonsexual transmission mechanisms.

Dr Handsfield is Professor Emeritus of Medicine at the Center for AIDS and STD at the University of Washington. He also was the STI program director for Public Health – Seattle & King County for 25 years.

Get CIDRAP news and other free newsletters.