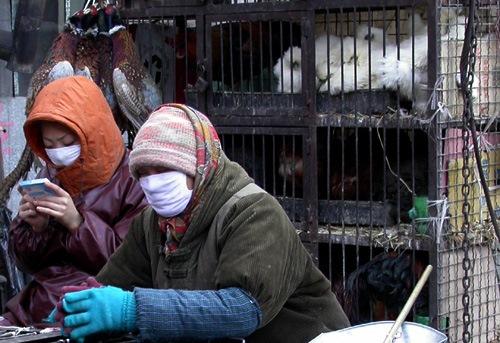 Women's jobs in poultry markets may have increased their exposure to H7N9, the authors suggested., Sonya Song / Flickr

Adding to the evidence that poultry are the source of China's H7N9 influenza outbreak, a serology study in the southern Guangdong province city of Shenzhen found evidence of asymptomatic or mild infections in poultry workers, with levels increasing in the outbreak's second wave.

Researchers, however, found no evidence of infection when they looked at blood samples from the general population. The team from Shenzhen and the University of Hong Kong published their findings yesterday in an early online edition of Clinical Infectious Diseases.

They collected blood samples from retail and wholesale poultry workers in May 2013 from all 10 of the city's districts and again in late December 2013 in seven districts where environmental swabs had tested positive for the virus. The team obtained samples from 501 workers in May and from 375 in December. In December the virus was identified in market environmental samples, and the first human case in Shenzhen detected.

For the general public, the authors collected blood samples in March and September of 2013 with the goal of recruiting 70 people in each of four age-groups. For both groups they tested for antibodies to both H7N9 and H5N1 using hemagglutination-inhibition (HI) assays.

The researchers found a hemagglutination-inhibition antibody titer of at least 1:160 in 7.2% of poultry workers in May and in 14.9% in December, a rise that was consistent with the second wave of H7N9 activity in China, with Guangdong as one of the hot spots. None of the participants had confirmed H7N9 infections, and investigators didn't find evidence of infection in any of the general public group for either testing period.

The team pointed out that other studies of H7N9 seroprevalence in Chinese poultry workers showed much lower levels. For example, a study based on sampling in Zhejiang province in April and May of 2013 found 1.3% had antibody titers suggesting earlier infection.

Looking for risk factors, the researchers found that being female and having occupational exposure for 10 or more years was associated with infection. The team said the increased risk in women may reflect their having the major share of poultry duties for that region, which include selling poultry, defeathering, and cleaning. They said the longer work history could be related to reduced preventive measures or may reflect greater susceptibility to infection in older people.

They found that working in a retail market, rather than a wholesale setting, was associated with antibody titers indicative of infection in the analysis of samples from May. The researchers wrote that the shorter stays in warehouse markets and twice-a-week disinfection protocols might limit workers' exposure to the H7N9 virus.

In other research news, a China-based research team compared five different line lists of lab-confirmed H7N9 cases with the official version kept by the Chinese Center for Disease Control and Prevention (China CDC) and found that all were reliable for assessing transmission and geographic spread, but using them to assess clinical severity was more of a challenge.

The publicly availableH7N9 line lists the group analyzed were from Bloomberg News, FluTrackers, HealthMap, the University of Hong Kong, and Virginia Tech.

The researchers found that demographic information was mostly complete among the line lists, but there were gaps in hospitalization dates, discharge dates, and health status. Key epidemiologic measures such as epidemic curves, time from illness onset to hospital admission, and impact of poultry market closures closely matched China CDC with little time lag. However, estimates of fatalities in hospitalized patients for the nonofficial sources were less reliable, because of a tendency of some to highlight the first discharged case in each province and provide fewer such reports on subsequent cases.

Line-list authors had limited access to data on symptom onset and exposure history, which made it difficult to assess transmissibility, the team wrote. They also noted that some line lists have different purposes, which can impact their usefulness.

For future emerging infectious disease outbreaks, researchers suggested that depositing all of the information in a single consistent database with agreed fields hosted by a public group would help prevent confusion and improve accuracy, making for more timely analyses.

In outbreak developments today, the World Health Organization (WHO) provided more details on three infections reported in China on May 26. All three of the patients are men from Anhui province who are hospitalized in critical condition.

They are from different cities and range in age from 40 to 69 years. Symptom onsets ranged from May 8 to 14, and hospitalization dates ranged from May 16 to 19. The report didn't list exposures for any of the patients.