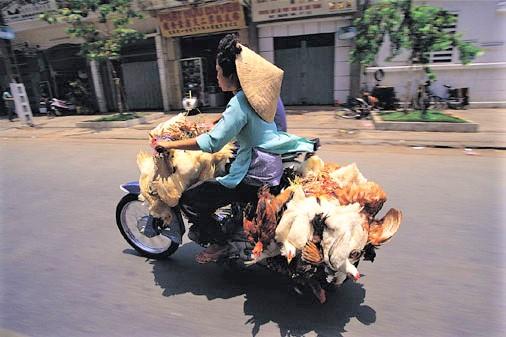 Resistance to the antibiotics commonly used in livestock production is rising in food-producing animals in the developing world, and China and India are seeing the worst of it, according to a new paper from an international team of researchers.

The authors of the paper, published yesterday in Science, say the findings are consistent with intensified meat production in many lower- and middle-income countries (LMICs), where antibiotic use in livestock is much less regulated than it is in Europe or the United States, and antibiotics are widely used to promote faster growth and compensate for poor hygiene and less nutritious feed.

"India and China are by far the biggest hot spots of antimicrobial resistance in animals, and it is probably fueled by the fact that antibiotics are so cheap and easily available," said study co-author Thomas Van Boeckel, PhD. "The scale at which antibiotic resistance seems to be increasing in those regions is clearly worrying."

The concern is that rising resistance to commonly used antibiotics in pigs, chickens, and cows means that farmers in these countries might find it increasingly difficult to treat sick animals and produce enough meat to satisfy growing consumer demand.

"It's a threat for the animal industry to have an increasing inability to treat and control infections on farms," Van Boeckel said.

Sparse data on AMR in animals

Worldwide, an estimated 73% of antibiotics used in human medicine are also used in food-animal production, not only for treating sick animals but also for disease prevention and growth promotion.

The European Union and the United States have taken steps to reduce this usage—including banning antibiotics from being used for growth promotion—and the World Health Organization (WHO) has urged member states to reduce veterinary antibiotic use. But widespread, unregulated antibiotic use in food animals is still occurring in most LMICS and is a growing concern, given the rising demand for protein in these countries.

Many infectious disease and antimicrobial resistance (AMR) experts fear that excessive use of antibiotics in animals could ultimately harm public health by promoting resistance in zoonotic pathogens, like Escherichia coli or Salmonella, that cause infections in people and by reducing the effectiveness of antibiotics that are also used in human medicine. The emergence of the gene MCR-1, which confers resistance to the last-resort antibiotic colistin, is thought to be linked to widespread use of colistin in Chinese pig production. (China banned colistin use in livestock in 2016.)

But less attention has been paid to the levels of antibiotic-resistant bacteria in the animals themselves, and how it's affecting animal health, especially in LMICs. While most developed nations conduct routine surveillance on resistant pathogens in livestock, surveillance data on AMR levels in food-producing animals in developing nations is scarce. Many LMICs lack the funding and infrastructure to conduct that type of surveillance.

"When we talk about antibiotic resistance in low- and middle-income countries, there is a lot of speculation, and a lot of expert opinion," said Van Boeckel, a professor at the Swiss Federal Institute for Technology and a visiting scholar with the Center for Disease Dynamics, Economics & Policy. "We tend to prefer data over that."

To fill in the gaps, Van Boeckel and his colleagues looked at 901 point-prevalence surveys on AMR rates in food animals and food products conducted in LMICs from 2000 through 2018. Point-prevalence surveys are essentially a snapshot in time of AMR levels based on bacterial samples taken from healthy animals. Most of the surveys (509) were from Asian countries, and the rest were from countries in Africa and the Americas.

The analysis focused on resistance in E coli, Campylobacter, nontyphoidal Salmonella, and Staphylococcus aureus to several classes of antibiotics. Van Boeckel and his colleagues also came up with a metric of resistance, which they call P50, that they thought would be meaningful for veterinarians. P50 represents the proportion of antibiotics in which bacterial resistance was higher than 50%.

"If you know your drug is more likely to fail than to succeed in treating the infection, then you're probably not going to use it because it's a very bad drug," Van Boeckel explained.

Using a geospatial mapping model to infer resistance trends from the point-prevalence surveys, the analysis estimated that from 2000 to 2018, P50 increased from 0.15 to 0.41 in chickens—meaning that 4 of 10 antibiotics used in chickens had resistance levels higher than 50%. P50 rose from 0.13 to 0.43 in pigs and plateaued between 0.12 and 0.23 in cattle.

The regions with the highest P50 values (over 0.4) were south and northeast India, northeast China, north Pakistan, Iran, Turkey, the south coast of Brazil, Egypt, the Red River Delta in Vietnam, and areas surrounding Mexico City, and Johannesburg. P50 values were low in most other parts of Africa, but hot spots appear to be emerging in Kenya and Morocco.

Van Boeckel noted that the low resistance levels estimated in the Americas was surprising, given that several South American countries are net meat exporters. But it could reflect the lack of point-prevalence surveys conducted in animals in these countries.

Among the factors associated with differences in P50 values were proximity to urban areas, temperature, and antimicrobial use. In Asia, 74% of the P50 hot spots corresponded to areas where antibiotic use in animals is expected to rise over the next decade.

The highest rates of resistance overall were found for the drugs most commonly used in animal production—tetracyclines, sulfonamides, and penicillin. Among the antibiotics considered critically important to human health by the WHO, the highest resistance rates were observed for ciprofloxacin and erythromycin (20% to 60%), with more moderate resistance rates seen for third- and fourth-generation cephalosporins (10% to 40%).

Van Boeckel and his colleagues say the rising AMR levels inferred in their analysis could mean that farmers in hot spots may have to rely on more expensive, second-line antibiotics, which could result in higher food prices.

While the map of AMR hot spots is not a replacement for traditional surveillance systems, Van Boekel says it's a good starting point and will provide global health officials with a guide for where more animal sampling needs to be conducted. It also sends a signal to policy makers in China and India that they need to start taking action to restrict antibiotic use in food animals to sustain their levels of meat production.

That could be a tall order. A previous study co-authored by Van Boeckel projected that antibiotic use in livestock in China—the largest consumer of veterinary antibiotics in the world—could grow by 59% by 2030 if the livestock sector continues to grow and antibiotic use goes unchecked. But Matt Ferreira, DVM, MPH, a veterinarian with the section of infectious diseases and global health at the University of Chicago, says other major livestock-producing countries have shown that it can be done.

"Countries that have large per capita pig production like Denmark and the Netherlands were able to accomplish tremendous reduction in antimicrobial use while maintaining high levels of economically successful production," said Ferreira, who was not involved in the study. "Importantly, these programs were a collaborative effort with regulators, farmers, and veterinarians all having a seat at the table."

Wealthier nations will need to do their part, too, Van Boeckel added, by helping promote and support farming practices that decrease the reliance on antibiotics. One strategy suggested in the paper is the creation of a global fund that could help subsidize farm-level biosafety and biosecurity measures in developing nations.

"We have an interest in trying to help those countries achieve this intensified production in a more sustainable manner, to try to not repeat the mistakes that we've made in Europe or the United States by overusing antibiotics for 50 or 60 years," he said.

"Any attempt to mitigate the effects of antimicrobial resistance will need to be a collaborative, global effort to improve AMR surveillance, decrease unnecessary use in animal production, and help support sustainable farming practices," he said.