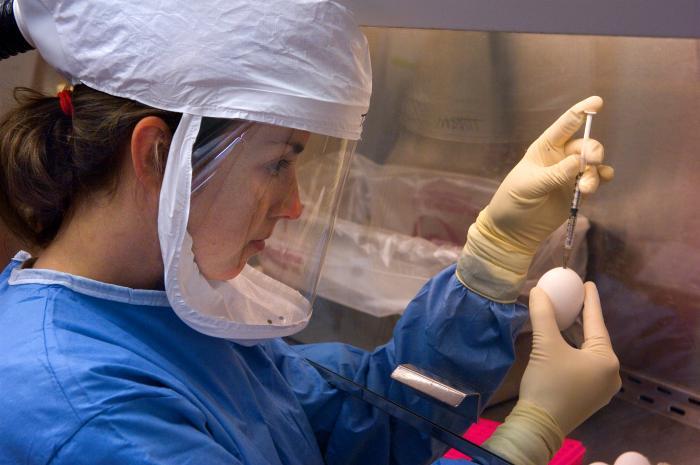 The ongoing debate over the appropriateness of experiments that increase the transmissibility of H5N1 and other avian flu viruses in mammals has heated up again with an article by two experts who argue that there are safer and better ways to investigate how the viruses could turn into a pandemic threat.

Writing this week in PLoS Medicine, Marc Lipsitch, PhD, of Harvard University and Alison P. Galvani, PhD, of Yale argue that experiments that render H5N1 more contagious in mammals are too risky and that other research approaches can unlock the mysteries of flu transmissibility without risking the release of a potential pandemic virus.

"Alternative approaches would not only be safer but would also be more effective at improving surveillance and vaccine design, the two purported benefits of gain-of-function experiments to create novel, mammalian-transmissible influenza strains," they write.

But two of the most prominent proponents of "gain-of-function" (GOF) studies, as experiments that increase viral transmissibility are known, counter that Lipsitch and Galvani overestimate the risks and that GOF studies have already yielded important advances in the understanding of H5N1 transmission and mammalian adaptation.

The two scientists, Ron Fouchier, PhD, of Erasmus Medical Centre in the Netherlands and Yoshihiro Kawaoka, DVM, PhD, of the University of Wisconsin, also contend that the alternative research approaches suggested by Lipsitch and Galvani, while useful, cannot yield solid conclusions about mammalian transmission. Both scientists commented in prepared statements.

Roots of the controversy

The continuing controversy over GOF studies was sparked by H5N1 studies led by Fouchier and Kawaoka a couple years ago. Fouchier's team used a combination of genetic engineering and serial infection of ferrets to develop a mutant H5N1 virus that could spread among the animals without direct contact. Kawaoka's group used a slightly different approach and created an H5N1-H1N1 reassortant virus that was likewise capable of airborne spread in ferrets.

When preliminary word of the two studies leaked out in late 2011, it triggered a review by the US National Science Advisory Board for Biosecurity (NSABB), given the roughly 60% fatality rate in known human H5N1 cases. Out of concern that publishing the full details of the studies could lead to the release of a dangerous virus, the board recommended in December 2011 that key details be stripped from the papers before publication.

But after the authors provided additional information and made some clarifications in their manuscripts, the board in March 2012 consented to publication of the full versions of both, although the vote on Fouchier's report was not unanimous. Kawaoka's study was published in May 2012 and Fouchier's followed in June.

Since then, several other influenza GOF studies have been published. For example, last month scientists from the University of Maryland reported that they serially infected ferrets with an avian H7N1 virus, which led to mutations that conferred airborne transmissibility. The study prompted a special "dual-use research of concern" (DURC) review, which included federal officials, before it was published. DURC refers to research yielding findings that could be used to do either good or harm.

Lipsitch and Galvani assert that there is a "quantifiable possibility" that novel viruses produced in GOF studies like Fouchier's and Kawaoka's could be accidentally or deliberately released. Arguing that this risk is not merely hypothetical, they cite the suggestion that the H1N1 flu strain that circulated globally from 1977 until 2009 originated in a laboratory accident.

In support of this point, they cite a 1992 article in which Robert G. Webster, PhD, Kawaoka, and others wrote that the 1977 H1N1 virus was genetically identical to a strain that caused an epidemic in 1950. The authors said the most likely explanation for its reemergence in 1977 was that it had been preserved in a frozen state for 27 years and somehow was reintroduced.

GOF experiments have generally been conducted in biosafety level 3 (BSL-3) or BSL-3-plus facilities. Lipsitch and Galvani cite published estimates that lab-associated infections occur in such facilities at the rate of two per 1,000 lab-years in the United States. At that rate, they observe, a 10-year GOF research program involving ten labs at US BSL-3 standards would run a nearly 20% risk of generating a lab-acquired infection, which could launch a chain of transmission.

The US Department of Health and Human Services' (HHS) guidelines for studies expected to create mammalian-transmissible H5N1 and H7N9 viruses say the risks and benefits should be weighed, the authors comment. The guidelines permit funding of such studies if there are no other feasible and safer ways to address the same scientific question.

The authors suggest that the standard should be refined to say that the GOF research should be done only if there are no safer ways to achieve the expected public health benefits.

In the view of GOF-research proponents, those public health benefits mainly involve an improved ability to detect dangerous viruses and to develop vaccines against pandemic flu strains. Lipsitch and Galvani contest both of those claims.

They say vaccine developers have denied the vaccine claim, noting that many vaccines have been developed without "a detailed molecular understanding of transmission." Further, the authors question the rationale that creating a potentially pandemic strain of H5N1 would be justified because it could permit the production of vaccines against that strain.

"Given that PPP [potential pandemic pathogen] experiments inevitably consider only a few possible genetic pathways to transmissibility, and that the precise correspondence between transmissibility in the ferret model and human transmissibility remains uncertain, we can never know whether PPP experimentation would hit upon the antigenic composition of the next pandemic strain that will emerge from nature," they write.

As for the claim of better surveillance, Lipsitch and Galvani assert that current surveillance is probably inadequate to detect an emerging pandemic strain, regardless of any warnings that PPP experiments might yield about worrisome mutations. Most H5N1 virus sequences, for example, are several months old by the time they are available in a public database, suggesting that a dangerous strain could be widespread before it would trigger an alarm.

Another barrier to reaping public health benefits from GOF studies, the authors argue, is that the relationship between a given viral genetic mutation or sequence and the viral phenotype—the virus's observable traits and behavior—is complex and depends on interactions of the mutation with the genetic background. This phenomenon is known as epistasis, they note.

For example, in a 2013 study, researchers took certain mutations in an engineered, ferret-transmissible H5N1 strain and assessed their effect in another H5N1 strain. In the ferret-transmissible strain, the mutations conferred an ability to bind to human receptors. But when the mutations were introduced into a more recent avian H5N1 strain, the ability to bind to human receptors was lost, according to Lipsitch and Galvani.

It is unlikely that "a catalog of mutations" could permit reliable predictions of transmission characteristics in circulating flu strains, they say.

"The prominent role of epistasis in influenza biology suggests that alternative approaches to studying the phenotypic impact of mutations on mammalian transmissibility would be not only less risky, but also more informative," they add.

They suggest a number of different ways to study the replication and transmission of flu viruses without incurring the risks involved in GOF studies. Some involve using pieces of virus rather than whole viruses, making them safer and typically less costly than "PPP" experiments.

Another option, they add, is to examine the evolutionary pathways by which former pandemic, and now seasonal, flu viruses adapted from birds to humans. But they also acknowledge that ultimately, "studies with intact viruses will be necessary for a full understanding of human transmissibility."

In his statement, Fouchier flatly rejected the view that scientific research poses a high risk of causing outbreaks or pandemics and that alternative and safer research approaches can eliminate the need for GOF studies of transmissibility.

He said Lipsitch and Galvani misinterpreted published data in their estimates of the risk of accidental release of viruses. "The data cited by Lipsitch and Galvani include only 11 laboratory-acquired infections in the entire USA in 7 years of research, none of which involved viruses, none of which resulted in fatalities, and—most importantly—none of which resulted in secondary cases," Fouchier wrote. "The truth is that scientific research has never triggered a virus pandemic."

In response to a question, he said the view that the H1N1 reemergence in 1977 was due to a lab accident is only speculation: "We have no information on where, when, and how this virus reappeared in humans. To then conclude that it was a lab escape is far-fetched.

The only certainty about the 1977 H1N1 reappearance is that it was the result of a mistake, he added. "The rest is all speculation."

Fouchier acknowledged that a few SARS coronavirus infections occurred in labs that did not meet international biosafety requirements, but noted that they didn't lead to widespread outbreaks. "As such, we can be confident that the biosafety and biocontainment practices that were agreed upon internationally at the Asilomar Conference on Recombinant DNA in 1975 are working very well, with negligible risks to public health."

He also dismissed the assertion that alternative research approaches can replace GOF studies: "The research agenda they propose (in table 2) is important (and currently ongoing), but alone will never lead to solid conclusions about mammalian adaptation and transmission: the proof of the pudding will need to come from gain-of-function studies using infectious viruses.

"This is why HHS has approved our H5N1 research, taking into account all ethical and safety and security issues, and weighing the risks of the research against the benefits."

In his statement, Kawaoka said his and Fouchier's H5N1 GOF studies have already contributed to pandemic preparedness. Before those studies, he said, some experts argued that H5N1 would not cause a pandemic, and therefore H5N1 vaccine stockpiles were not needed.

"However, the ferret transmission studies in my lab and Ron Fouchier’s lab demonstrated that H5N1 viruses have pandemic potential and it is important to continue to stockpile H5N1 vaccines," he wrote. "This is a critical point since vaccines expire and decisions by policy makers as to whether we continue to stockpile H5N1 vaccines should be based on scientific facts."

"In addition, we need to understand the adaptation of avian influenza viruses to mammals—one of the mechanisms by which pandemics occur—this, we cannot do with seasonal viruses."

He also defended the contention that GOF studies can yield data helpful in vaccine development, commenting that such data are useful for strain selection for H5N1 vaccines.

"There are multiple antigenically different H5N1 viruses circulating in nature. Because of limited resources, a vaccine cannot be made against every virus," he wrote. "The information obtained by ferret transmission studies can be used to evaluate which of the circulating H5N1 viruses have more pandemic potential. It is important to note that vaccine developers do not select vaccine strains. Governments decide which vaccine strains to use based on WHO [World Health Organization] recommendation."

Kawaoka also took exception to Lipsitch and Galvani's assertion that it is unlikely that a "catalog of mutations could inform reliable predictions of transmission phenotype in circulating strains."

"The mutations in PB2 proteins at positions 627K and 701N are important, specific amino acid residues that promote efficient growth of avian influenza viruses in mammalian cells," Kawaoka said. "The authors failed to recognize that these residues were identified by gain-of-function experiments with H5N1 viruses"