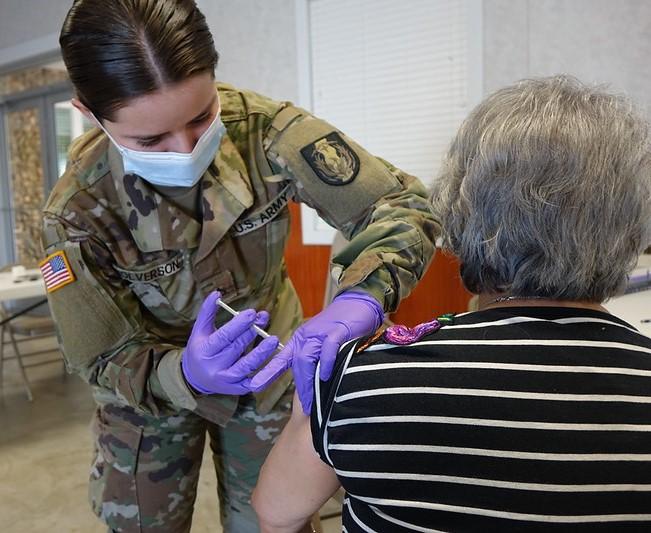 Following record COVID-19 deaths in January, several US experts extolled the benefits of vaccinating as many people as possible with one dose of COVID vaccine before ensuring people receive the recommended second dose.

Some public health experts are urging the federal government via the Centers for Disease Control and Prevention's (CDC's) Advisory Committee on Immunization Practices (ACIP), to immediately review data from Pfizer and Moderna, which are approved for use as two doses given 3 to 4 weeks apart, and consider giving as many first doses to people 65 and older as quickly as possible, and not withhold vaccines for planned second doses.

Such a dosing strategy has already been used in the United Kingdom and Israel, two countries further ahead in vaccinating their populations than the United States.

"The maximum public health benefit would come from giving a single dose to as many people as possible, and following up with a second dose when supply improves," said Neal Halsey, MD, of Johns Hopkins University, in an interview. Halsey and Stanley Plotkin, MD, co-authored a letter in Clinical Infectious Diseases last week explaining how delaying a second dose of vaccine would accelerate the US vaccine rollout.

Halsey said data from both companies show the first dose of the vaccine offers significant protection against COVID-19 in the short term, for at least 1 to 3 months after injection. He also said he and Plotkin believe this was the most beneficial public health strategy even before the arrival of new variants of the virus was discovered.

"There are a number of examples of changing [vaccination] course because ACIP takes into account public health impact," Halsey said. "We asked the ACIP to review in depth this strategy to give one dose as rapidly as possible. Such a meeting should be scheduled as soon as possible."

The University of Minnesota's Michael Osterholm, PhD, MPH, said yesterday on "Meet the Press"  that he believes the United States has to change direction on vaccine strategy in light of the possibility of a surge of new infections coming from variant strains.

"If we have anything similar as in England, we could have 200,000 to 220,000 people hospitalized on a given day in the US, when our worst day so far has been 130,000," said Osterholm in an interview. He is director of the Center for Infectious Disease Research and Policy (CIDRAP), which publishes CIDRAP News.

"When we get there it's too late. Our best opportunity to save lives is to vaccinate more people now."

Rethinking the approach during a crisis

Osterholm said he has always been and remains in favor of using vaccines in their approved two-dose form, but said the issue of maximizing one-dose recipients first needs to be reviewed.

"Time is of the essence. Can we space out doses?" he said. "We need to bring all the science to the table as quickly as possible."

Osterholm said those who argue against the approach say it goes against the science. Marc Lipsitch, DPhil, of Harvard University, said that argument misses the mark during a public health emergency.

"I think this [strategy] is something on which reasonable people could disagree, but saying you should only do something supported by randomized evidence when there's an emergency would have precluded us from using masks, social distancing, from doing all the things we know are good public health practices," he said.

"There's an old saying that we wouldn't use parachutes or aspirin if we waited for randomized trials, either."

Lipsitch said the emergence of variant strains adds urgency to the dose-delaying question. Data from both Pfizer and Moderna show those vaccines are effective in protecting against the highly contagious B117 variant first identified in England, and at least somewhat protective against infections caused by variants that were first identified in Brazil and South Africa.

"The goal of vaccination under the approach we are using is to reduce the morbidity and mortality, not only to stop transmission," Lipsitch said. "With [variants] it's just a stronger reason to try to use get as many people as partially immunized as possible."

January was the deadliest month of the COVD-19 pandemic in the United States, with 95,254 Americans deaths attributed to the virus, officials noted today.

During a White House coronavirus briefing, CDC Director Rochelle Walensky, MD, MPH, said that, despite some downward trends, Americans were still getting sick and hospitalized at extremely high rates.

But that number could jump within the next 6 to 12 weeks if variant strains of the virus, especially B117, become the dominant strain in the United States before many Americans have been vaccinated.

To date, the CDC’s COVID Data Tracker shows 49,933,250 COVID-19 vaccines have been distributed in the country, and 31,123,299 doses have been administered. According to a New York Times database, these numbers mean 7.6% of all Americans have received one dose of vaccine, while only 1.7% are considered fully vaccinated.

Over the weekend Maryland became the second state to identify a case of B1351, a variant strain first seen in South Africa. The CDC says there are now three known cases of B1351 in the United States, 467 cases of B117, and 1 case of P.1, which was first identified in Brazil.

The patient in Maryland had no known travel history.

The $230 million contract will help Ellume quickly scale up to producing 19 million tests per month by the end of 2021. The over-the-counter test uses a mid-nasal swab and costs $30. Slavitt said that cost is expected to come down.