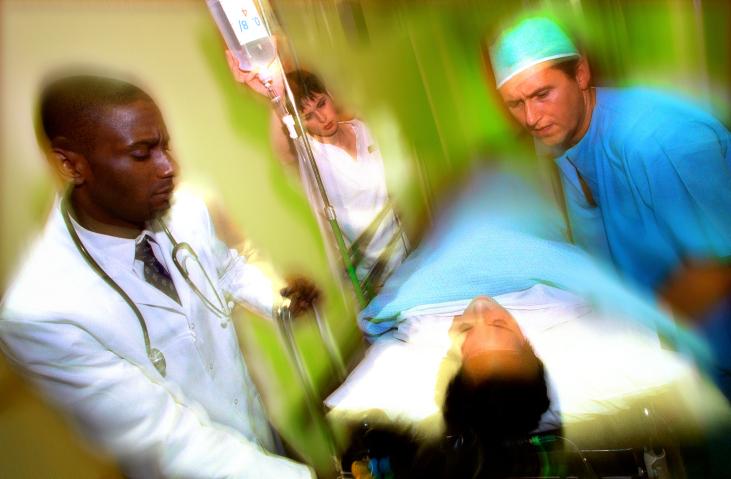 One expert said, "We really don't have a good grip on the epidemiology of influenza in the healthcare setting.", Stockbyte

Hospitals and public health officials strongly promote healthcare worker (HCW) flu vaccination as a step to protect patients, but a new analysis found that evidence for a benefit isn't as strong as previously thought.

And influenza experts who commented on the analysis pointed out that, for specific outcomes such as lab-confirmed influenza, the data showed little evidence of protection for patients. They agreed, though, that immunization is a good measure to take.

The meta-analysis, by researchers from the US Centers for Disease Control and Prevention (CDC), appeared in an early online edition of Clinical Infectious Diseases. They focused on four randomized controlled trials and four observational studies from long-term facilities or hospitals. They pooled the results and assigned grades to the quality of the evidence.

An increasing number of health systems require staff to receive flu shots or else wear a mask during flu season, but the efforts have been met with pushback from some medical worker groups. Employee groups support flu vaccination and other measures to control the spread of flu, but many say workers should have the right to opt out for health, religious, or personal reasons.

In addition, the science behind flu vaccination mandates has been a topic of recent debate. In November 2012, an editorial in a Canadian medical journal calling for mandatory flu shots in HCWs prompted a quick response from researchers who questioned the evidence cited in the piece.

The new CDC analysis of HCW flu vaccination is part of an overall trend toward evidence-based public health recommendations and parallels recent new scrutiny on the efficacy of the flu vaccine itself.

Most studies that have looked at the health impact of HCW flu vaccination on patients have focused on nursing homes. Older people are more susceptible to flu and are known to have weaker immune response to the vaccine. Nursing home outbreaks are one marker that health officials use to monitor yearly flu activity.

In the new analysis, researchers found that HCW vaccination prevented all-cause death and influenza-like illness (ILI). Pooling the results, they estimated that the measure reduced deaths from any cause by 29%. Death rates varied in the four randomized trials. Efforts to increase flu vaccination in HCWs were associated with a drop in deaths that ranged from 0.8% to 8%.

Though the investigators found a 42% drop in ILI, the impact on lab-confirmed flu—a much more specific outcome—was lower and not statistically significant.

The team gave the evidence an overall "moderate" grade.  They ranked the quality of evidence for HCW vaccination on mortality as moderate and the quality for both influenza and hospitalization as low.

They noted that the 29% drop in deaths is likely to raise questions, because flu has been estimated to play a role in less than 10% of all winter deaths in seniors. They added, however, that there are no estimates on the proportion of winter deaths from flu in frail elderly people.

Biologically, flu vaccination of HCW has the potential to reduce flu illness in patients, the team wrote, because a substantial number of workers, like the general public, are infected each season. They also said that the lag between shedding and symptom onset can mean HCWs continue to work while they are unknowingly infected.

The benefits of HCW vaccination to employees and the patients outweigh possible harms, and the practice can improve patient safety, they concluded.

In an editorial published alongside the study, Marie Griffin, MD, MPH, professor of preventive medicine at Vanderbilt University School of Medicine, wrote that the researchers based the overall "moderate" grade on the consistent reduction in all-cause deaths in the intervention groups. She noted, however, that studies included in the analysis, though important, had some weaknesses, ranging from being underpowered to not evaluating lab-confirmed flu.

Griffin pointed out that, after the researchers submitted their study, a Cochrane group updated its meta-analysis on the topic, using three of the same studies and focusing on more specific outcomes, such as lab-confirmed flu. The Cochrane analysis found no evidence to support compulsory vaccination of HCW, she wrote.

"It is disconcerting when meta-analyses come to different conclusions," Griffin wrote, adding that the two reports agreed about the lack of evidence for protection for more specific outcomes, including lab-confirmed flu and acute respiratory hospitalizations.

Considering the grave impact flu outbreaks can have in institutional settings, the safety and moderate efficacy of current vaccines, and the potential benefit of herd protection, the new meta-analysis provides reassurance that the measure passes muster, she wrote. "Vaccination of healthcare workers to protect vulnerable patients and residents of long-term facilities should be viewed as an evidence-based recommendation."

Nick Kelley, PhD, research associate for the University of Minnesota's Center for Infectious Disease Research and Policy (CIDRAP), said that the new analysis provides a more robust look at HCW flu immunization studies than earlier reviews and includes observational studies that weren't available at the time.

Kelley has coauthored recent analyses of flu vaccines, including one published by CIDRAP in October 2012 that found gaps in protection, estimated the efficacy of the flu shot in non-elderly adults to be 59%, and pushed for new innovations that could lead to a better one. CIDRAP publishes CIDRAP News.

For outcomes that matter the most—lab-confirmed flu and flu hospitalizations—the two meta-analyses (the CDC's and Cochrane's) both find low or very low levels of evidence, he said. "We simply don't have good evidence that vaccination of healthcare personnel prevents influenza transmission to patients," Kelley said.

The newest study findings are very different from the one that guided HCW flu vaccination recommendations made by the CDC's Healthcare Infection Control Practices Advisory Committee (HICPAC) in 2006, he noted. That analysis was based on two randomized control trials that had been published at the time and found that the evidence was highest quality.

Kelley said the difference between the two new meta-analyses is how they view all-cause mortality, which he said isn’t a very specific outcome, because it's not directly related to influenza.  The Cochrane group excluded the measure, but the authors of the newest study included the outcome, which was the only outcome that showed moderate evidence; the rest were low.

He also cautioned that the meta-analyses focus on nursing homes, which are very different from hospitals, where patient turnover is higher and there are often people in the facility who aren't HCWs. Even with 100% vaccination rates in employees, the roughly 60% protection offered by the vaccine creates a gap in which workers can still get sick and spread the virus to patients, he said.

"We really don't have a good grip on the epidemiology of influenza in the healthcare setting," Kelley said.

Still, it’s clear that vaccination is the best strategy to minimize getting flu, he said. "It makes sense to vaccinate healthcare personnel. The evidence is just not as strong as most organization like to suggest, which this study highlights."

"It's the best intervention we currently have, so we need to keep using it while working toward a better flu vaccine," Kelley said.