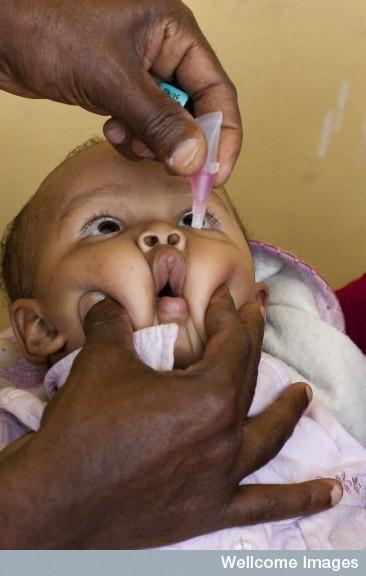 Two cases of vaccine-derived poliovirus type 2 (VDPV2) have been confirmed by officials in Myanmar, while a campaign in India to deliver inactivated polio vaccine (IPV), a form that cannot cause the disease, has been launched, representing a new phase in that country's eradication efforts.

In research news, a trial in infants of a high-dose type 2 IPV candidate showed promising results in a study published yesterday in The Lancet Infectious Diseases.

The World Health Organization (WHO) said in a statement yesterday that a 16-month-old Myanmar boy who developed acute flaccid paralysis (AFP) on Oct 5 tested positive for VDPV2, with the agency receiving the information on Nov 7. The child had received oral polio vaccine (OPV), which on rare occasions can cause the disease.

The WHO also said that a 28-month-old child who developed AFP on Apr 16 also tested positive for the same VDPV2 strain. Both children live in the same township in Rakhine state in southwest Myanmar on the Bay of Bengal.

"The genetic changes of the isolates detected in April and October suggest that the cVDPV2 [circulating VDPV2] may have been circulating for more than one year," the WHO said.

Stool samples from 28 close contacts are being tested for the virus, and three additional AFP cases in the area are being investigated, the organization said it the statement.

Polio vaccination coverage is about 76% but is lower in certain special-risk populations, the WHO said. National surveillance is generally good but does have gaps, the agency added. Supplemental vaccination in the area was carried out in early December, and more efforts are planned.

Myanmar officials are planning to switch from a trivalent (three-strain) to a bivalent (two-strain) OPV in April, eliminating the type 2 strain. To prepare for the move, IPV was launched throughout the country on Dec 3.

In response to the situation in Myanmar, the US Centers for the Disease Control and Prevention (CDC) yesterday raised its travel advisory to the country from level 1 (watch—practice usual precautions) to level 2 (alert—practice enhanced precautions). Topping the list of activities to protect travelers before they depart is to receive polio immunization.

Authorities in India, meanwhile, have begun IPV immunization, a key step in the final push to end polio there, the World Economic Forum (WEF) reported today, almost 5 years after the last case of wild poliovirus infection in the country.

IPV introduction will be followed shortly by discontinuation of OPV type 2, which will minimize the risk of VDPV2 cases. Beginning in early 2016, children will instead receive bivalent OPV plus IPV.

Administering one dose of IPV at 14 weeks with the third dose of OPV is designed to build up rapid immunity to any potential outbreak of cVDPV2 in the future.

In the Lancet study, an international team, including CDC researchers, reported yesterday that they administered an experimental monovalent type 2 high-dose IPV (mIPV2HD) to 117 infants and standard-dose IPV to 116 at 14 weeks of age. All babies then received monovalent type 2 OPV at 18 weeks, at which time seroconversion and antibody titers were measured.

The authors concluded, "Our findings lend support to the use of mIPV2HD as an option for stockpiling for outbreak response or primary protection in selected areas at risk for emergence of poliovirus type 2 during the next phase of the polio eradication plan."

In a related Lancet Infectious Diseases commentary, experts not involved in the study said that the mIPV2HD vaccine is also being tested in clinical trials in Pakistan. If data there confirm yesterday's findings, the Global Polio Eradication Initiative needs to decide quickly whether to add the vaccine to the global outbreak response armamentarium, they wrote.

Dec 21 WHO statement on Myanmar cases