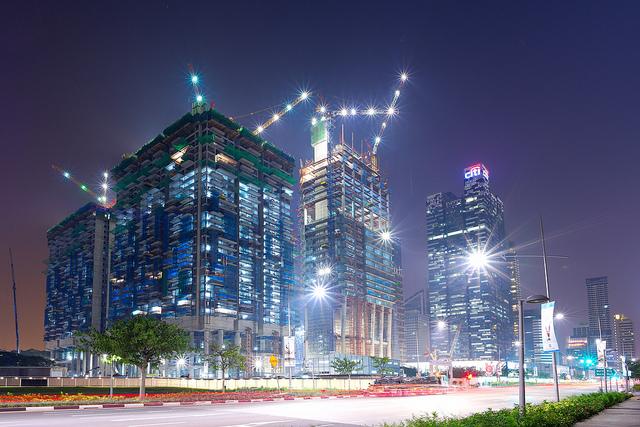 The Marina One project, one of many new construction sites in Singapore., Nicolas Lannuzel / Flickr cc

These are a few of the theories experts are using to explain why Singapore, a city-state known for its excellent vector control programs, has seen a flurry of Zika infections in the last few weeks. Today Singapore's Ministry of Health reports there are now 356 locally acquired cases.

"Zika has been around since the 1960s. The laboratories in Ministry of Health and Ministry of Environment have been doing surveillance on this illness for several years, and we have not isolated Zika in patients or in mosquitoes [until now]," said Hoe Nam Leong, MBBS, an infectious disease specialist at Mount Elizabeth Novena Hospital in Singapore. "We think this is real."

In May, Singapore reported its first travel-related case of Zika in a man who had recently been in Brazil. But the current outbreak suggests that local transmission is occurring at a rapid clip.

"We suspect a significant mutation occurred that conferred [the virus] an advantage in spreading from person to mosquito to person. Previously, reports of Zika are far and few in between," said Leong.

Leong said it was "clearly not" better surveillance, prompted by the current Zika crisis in the Americas, that has led to the surge in cases in Singapore. Moreover, the strain circulating in Singapore, though closely related, is not the same French Polynesian strain behind the Zika cases in Brazil, the United States, and the rest of the Americas.

Instead, Leong explained that the strain in Singapore is related to a strain that caused a Zika outbreak on Yap Island in 2007. That strain has been circulating in Thailand since 2012.

"The Southeast Asian strain and the Americas strain differ in some genetic changes, but these have not resulted in significant protein changes," said Leong. "Overall, we believe the risk of microcephaly would be similar."

Clues to explain the current outbreak

Paul Anantharajah Tambyah, MD, the secretary-general of the Asia Pacific Society of Clinical Microbiology and Infection, said he would not be surprised to learn that the current virulent Zika strain was imported from Thailand. He said Singapore's massive construction boom and influx of guest workers from across Asia made the city-state prime territory for Zika.

"My theory on what has happened is that there may be some degree of herd immunity to Zika in Southeast Asia, hence the rarity of infections in adults to date in the region," said Tambyah. "Most of the early Thai infections were reported in travelers, but subsequent surveillance studies yielded a number of cases in locals."

Tambyah said that, like dengue, which has also increased in Singapore in recent years and is also caused by a mosquito-borne flavivirus, Zika was held back by herd immunity until it came to a crowded, urban landscape, such as Singapore.

Infectious disease and mosquito control expert Duane Gubler, ScD, MS, agrees with Tambyah. "My guess is that the virus has been circulating silently all these years, and the same demographic and societal pressure that have driven up chikungunya and dengue infections, included unprecedented urbanization, have increased transmission."

Gubler, now retired, served as director of the US Centers for Disease Control and Prevention's Division of Vector-Borne Infectious Diseases for 15 years.

Tambyah said he wonders if Zika, in addition to being affected by rapid urbanization, is following the chikungunya 226 mutation, which allowed that flavivirus to be transmitted by different mosquito species.

"What is most intriguing is the question as to whether some mutation has occurred in the Zika virus to make it more transmissible by the Aedes albopictus mosquito—this would be analogous to what happened with chikungunya," said Tambyah.

At this point, Gubler warns that most ideas used to explain Singapore's outbreak are just guesses.

"We need to know more about the strain, more about everything before we have answers," he said.