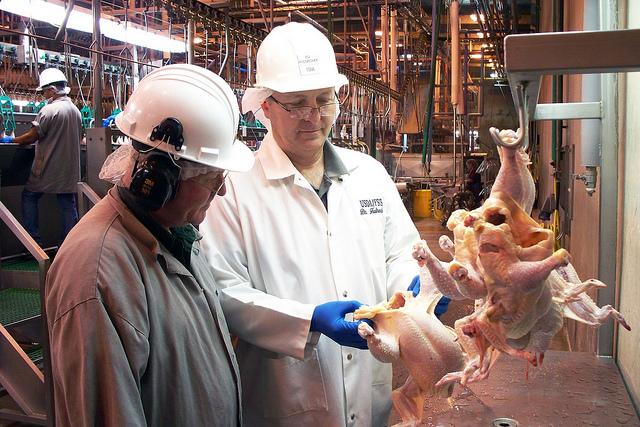 The US Department of Agriculture (USDA) announced yesterday the launch of controversial changes in its poultry inspection system that will shift some inspection duties from government to industry employees, and the agency simultaneously set new requirements designed to control Salmonella and Campylobacter in poultry.

The USDA estimates that the new inspection regime, called the New Poultry Inspection System (NPIS), will prevent up to 5,000 foodborne illnesses per year by using government inspectors more efficiently. But consumer groups that have long objected to the program continue to see it as a reduction of the USDA's poultry inspection efforts.

One change the USDA made in response to the 250,000 comments it received during more than 2 years of reviewing the program was to keep the speed limit for chicken production lines the same, at 140 birds per minute. The original proposal would have allowed it to rise to 175 birds, which raised concern about both food and worker safety.

The final rule does allow the speed of turkey production lines to increase from 51 to 55 birds per minute, according to USDA documents.

Processing plants will have the option to operate under the NPIS or stick with one of four existing inspection programs, the USDA said. However, all facilities will be required to document actions they take to control Salmonella, Campylobacter, and other pathogens, and must use microbiologic testing to show that the actions are working.

Industry to take over sorting carcasses

In announcing the new rule, Agriculture Secretary Tom Vilsack said in a press release, "The United States has been relying on a poultry inspection model that dates back to 1957, while rates of foodborne illness due to Salmonella and Campylobacter remain stubbornly high.

"The system we are announcing today imposes stricter requirements on the poultry industry and places our trained inspectors where they can better ensure food is being processed safely. These improvements make use of sound science to modernize food safety procedures and prevent thousands of illnesses each year."

Under the NPIS, poultry companies must sort carcasses for quality defects before presenting them to USDA Food Safety and Inspection Service (FSIS) inspectors, the agency said, adding, "This system allows for FSIS inspectors to focus less on routine quality assurance tasks that have little relationship to preventing pathogens like Salmonella and instead focus more on strategies that are proven to strengthen food safety.

Under the existing inspection systems, FSIS inspectors on the production line help sort carcasses mostly on the basis of quality factors, according to a USDA question-and-answer statement. Under the NPIS, these inspectors will move to the end of the slaughter process, where they will "conduct carcass-by-carcass inspections focused on food safety."

In addition, each line will have one off-line FSIS inspector to verify food safety activities, the USDA says. Their duties will include the types of tasks mentioned above by Vilsack and observing companies' employees and equipment at work to assess overall process control. Previously off-line inspectors have been responsible for monitoring more than one line.

The off-line inspectors will check 10 carcasses per hour for fecal material and other defects, which is far more than under other inspection programs, the USDA says. It maintains that fecal contamination was lower in plants that pilot-tested the NPIS than in plants using conventional systems.

The USDA estimates that when the NPIC is fully phased in—which may take 3 to 5 years—there will be about 800 fewer on-line inspectors than there are now, FSIS spokeswoman Alexandra Tarrant told CIDRAP News today. But she said no layoffs are expected, because those affected will be able to move to other positions in the agency.

Tarrant said companies can opt in to the NPIS now, but the schedule for implementing it will depend on negotiations with the inspectors' union.

As for product testing, the FSIS will now require that most poultry processors conduct microbiologic tests at two points in the production process. Very small facilities, however, have to test at only one point.

The Consumer Federation of America (CFA) pointed out that companies are not actually required to test for Salmonella and Campylobacter, the most common pathogens in poultry.

"The rule requires that plants test at two points along the production line, pre-chill and post-chill. That's new," said Chris Waldrop, director of the CFA's Food Safety Institute. "But FSIS is leaving it up to the plant to determine what to test for. They could test for Salmonella or Campylobacter, or for indicator organisms like E coli."

Waldrop said it's unclear whether facilities will test for the two pathogens, though some large plants do so now. "We wanted to make sure that plants were testing for the pathogens, and USDA decided not to go that route," he commented.

The CFA also criticized the USDA for not requiring training for the industry employees who will sort carcasses. "It's up to each plant to determine what level of training to give to those employees," Waldrop said. "There's an incentive for the plant to send as much poultry down the line as possible, so there's a disincentive for them to be extra vigilant."

"In its desire to save some nine million dollars next year, the USDA missed the boat on designing a scientific approach to modernizing poultry inspection," DeWaal said in a statement. "With more than 600 people sick from the Foster Farms outbreak alone [see today's related news scan], this is hardly the time to reduce USDA's oversight of the poultry industry."