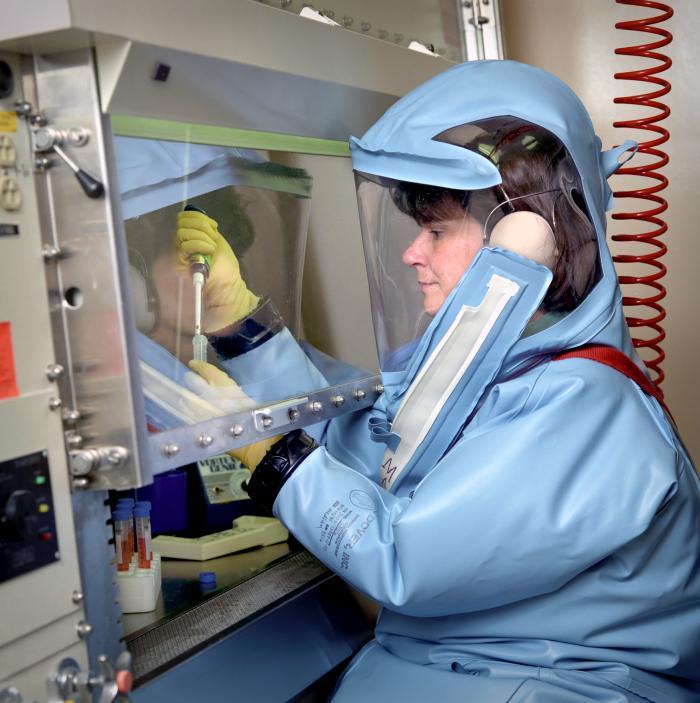 CDC scientist pipetting specimens in biosafety 4 lab, designed to avoid the spread of contaminants through the laboratory., CDC

Amid new concerns about lab safety lapses and in a counterpoint to recent calls for restrictions on research that may render pathogens more dangerous, 36 scientists from several countries have issued a formal statement asserting that research on potentially dangerous pathogens can be done safely and is necessary for a full understanding of infectious diseases.

The group, which calls itself "Scientists for Science," includes the two scientists who have been most prominently associated with "gain-of-function" (GOF) research: Ron Fouchier, PhD, of Erasmus Medical Centre in the Netherlands and Yoshihiro Kawaoka, DVM, PhD, of the University of Wisconsin.

GOF research refers to experiments that involve increasing the virulence, transmissibility, or host range of microbes. The statement does not refer specifically to GOF studies but clearly relates to them, though not exclusively.

"Scientists for Science are confident that biomedical research on potentially dangerous pathogens can be performed safely and is essential for a comprehensive understanding of microbial disease pathogenesis, prevention and treatment," the statement reads. "The results of such research are often unanticipated and accrue over time; therefore, risk-benefit analyses are difficult to assess accurately."

The Scientists for Science statement comes in the wake of lab safety lapses involving Bacillus anthracis and H5N1 avian flu at the Centers for Disease Control and Prevention and the discovery of smallpox virus samples in a Food and Drug Administration facility. The incidents have increased concern about lab safety in general and the risks of GOF research in particular.

On Jul 14 another group of scientists, who call themselves the Cambridge Working Group, called for a halt to research involving the creation of "potential pandemic pathogens," especially flu viruses, pending a full assessment of the risks and benefits and of whether the same information could be gained by safer methods. Two days later, the European Centre for Disease Prevention and Control (ECDC) said the safety of studies that involve the generation of potential pandemic pathogens deserves more public discussion.

Signers of the Scientists for Science statement include researchers from universities and other research centers in the United States, the United Kingdom, Germany, the Netherlands, and Australia. Besides Fouchier and Kawaoka, the list includes such names as Christian Drosten of the University of Bonn, Peter Doherty of the University of Melbourne, Peter Palese of the Icahn School of Medicine at Mt. Sinai in New York City, Vincent Racaniello of Columbia University, and Andrew Pekosz of Johns Hopkins University.

Since the statement was posted 2 days ago, 13 more individuals have added their names as "supporting scientists." They include several US government scientists who signed on as private individuals. Among the latest signers are Ian Lipkin of Columbia and David Morens, Jeffery Taubenberger, and John Yewdell of the National Institute of Allergy and Infectious Diseases.

Paul Duprex, PhD, associate professor of microbiology at Boston University, said in an interview that the statement grew out of conversations and e-mail exchanges he had with Racaniello of Columbia and Sean Whelan of Harvard University.

He said the trio talked about "the need to be proactive in explaining what we do and deal with the fact that there are a number of people who can make things worse by scare-mongering in the public. . . . We came to the conclusion that we had two options: either keep our heads down or explain the importance of basic microbiological research and what it has achieved."

"That is why Scientists for Science was established and we worked on the statement iteratively with input from Yoshi Kawaoka, for example," Duprex said.

The statement says that significant resources have been invested in building biosafety level 3 and 4 labs globally and in limiting risks through regulations, engineering features, and training. "Ensuring that these facilities operate safely and are staffed effectively so that risk is minimized is our most important line of defense, as opposed to limiting the types of experiments that are done," it adds.

It goes on to say that studies on dangerous pathogens are already extensively regulated, unlike recombinant DNA research at the time of the Asilomar conference in 1975. Studies involving "select agents" are subject to federal regulations, and research plans for other organisms are reviewed by scientists and funding agencies, while safety committees review risk assessments and mitigation plans.

"If there is going to be further discussion about these issues, we must have input from outside experts with the background and skills to conduct actual risk assessments based on specific experiments and existing laboratories," the statement says.

"Such conversations are best facilitated under the auspices of a neutral party, such as the International Union of Microbiological Societies or the American Society for Microbiology [ASM], or national academies, such as the National Academy of Sciences [NAS], USA. We suggest they should organize a meeting to discuss these issues."

The statement closes with a pledge that the group will provide scientists and the public with accurate information and will work to promote "open and unbiased discourse."

Duprex said he and his partners had been discussing doing something for a long time but started writing the statement about 2 weeks ago. He acknowledged that the Cambridge Working Group's statement was a factor in moving them to act, but said it wasn't the only one.

"That in addition to many other things crystallized why it's important for scientists to speak up," he said. However, "This is not about people fighting with each other, it's about instructive, proactive, reasonable debate."

He commented further by e-mail: "Even though much of the focus and criticism is directed at so called 'gain of function' studies, as scientists we see this in a much broader perspective. We expect that www.scientistsforscience.org will be a forum for deliberation among SfS members, to discuss how to carry out experiments with dangerous pathogens safely and to share good practice."

He added that the group plans to provide facts and commentary and engage in open discourse with other scientists and the public. "We are convinced that using rhetoric or posturing to make points is counterproductive and does not serve science well. When necessary we will proactively respond to statements which are either damaging or simply erroneous."

Duprex said the group plans to approach the ASM and NAS about organizing a meeting to discuss biosecurity.